On the other hand, Microsoft's new model pricing strategy has done almost nothing to move its average price. Whereas the average Xbox 360 sold for $260 in August, the same hardware sold for $261 on average in September. Under the assumption that the only two models of the Xbox 360 available during September were the $200 and $300 models, we see that approximately three Elite models were sold for each Arcade model. Together with the strong sales of the PlayStation 3 at $300, this suggests that there is a significant pool of consumers willing to spend $300 on either an Xbox 360 or a PlayStation 3 even when less expensive console options exist. Until September 2009 the Nintendo Wii had held its original launch price of $250. With only one week at its new $200 price, the average price of the Nintendo Wii dropped to $218 for the month. During October we expect that average price to drop to precisely $200, much as was seen with the PlayStation 3 price going to $300 last month. The PlayStation 3 was the top console platform for the month, its first time having that honor. We suggested last time that the system could hit 2.0 – 2.5 million units during the final three months of the year, and its September sales rate of 98,000 units per week is consistent with that expectation. Again turning to the Xbox 360 price cut in Fall 2007, we note that Microsoft's system moved just over 100,000 units a week on the back of a price cut and launch of Halo 3. Sony managed to reach that level of sales at essentially the same price even without the killer app. 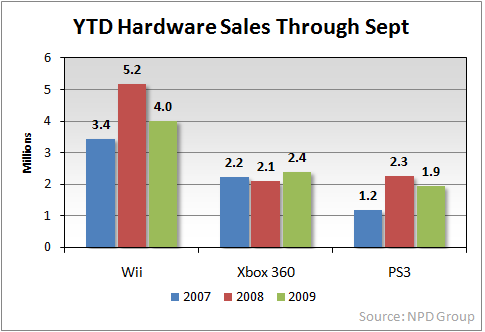 Regardless, the PlayStation 3 has a steep hill to climb if it is to outsell its rival, the Xbox 360, for all of 2009. It is currently 450,000 units behind Microsoft's system and will have to outsell its rival by around 35,000 units per week through the end of the year just to pull even. Even with the PlayStation 3 and Xbox 360 showing growth or strong growth potential, they both lag far behind the year-to-date total for Nintendo's Wii.
Console
Get daily news, dev blogs, and stories from Game Developer straight to your inbox
Subscribe