Gamasutra looks at PSP Go first-month sales, estimated at 100-145,000 -- and finds "strong reservations" for the PSP's prospects in the U.S., with GTA: Chinatown Wars' slow retail launch just one red flag.
Matt Matthews
Blogger
November 16, 2009
[Gamasutra looks at PSP Go first-month sales, estimated at 100-145,000 -- and finds "strong reservations" for the PlayStation Portable's prospects in the U.S., with GTA: Chinatown Wars' slow retail launch just one red flag.] Since Sony launched the PSP Go handheld on 1 October 2009, industry observers have sought any concrete indication of its sales. At best, Sony has released statements of being pleased with the system's low-key release (“additive to Sony's PlayStation business” and not “at the expense of PSP-3000 sales” according to Sony's John Koller), and the NPD Group rolls all PSP hardware sales up into the single figure that it releases for the system each month. Repeated requests to the NPD Group for more detailed data have been politely declined. However, some information appears to have slipped through the cracks. The post history of “creamsugar”, a member of the rowdy NeoGAF forum, reveals numerous data leaks, presumably from official NPD Group reports, and those leaks have proven reliable when later compared with official data. According to a post made by creamsugar last week, sales of the PSP Go were around 100,000 units during October 2009. Moreover, the black PSP Go system was apparently twice as popular as the white model. The NPD Group would not confirm the accuracy of the data offered by creamsugar. According to private discussions with analysts, we feel the number of PSP Go systems sold in the U.S. so far is between 100,000 and 145,000, lending some credence to the leaked figure. Assuming launch-to-date (LTD) sales of the PSP Go in that range, the smaller handheld has assumed around 25-40% of the platform's hardware sales. Given that the PSP sold 1.4 million systems during November and December of last year and the system's declining sales during 2009, we feel it likely that the PSP Go installed base will range from 450,000 up to 550,000 systems by the end of the year (just in the United States). One recent move that we see as potentially positive for the PSP Go is GameStop's announcement of an in-store downloadable content program. A download-only system like the PSP Go runs contrary to the used-product resale model which accounts for much of GameStop's profit margin, and indications are that GameStop will only initially sell DLC for physical games. However, we see benefits for both Sony and GameStop in the mid-term as long as physical games can be traded and the credit can be used to purchase games for the PSP Go (as well as for other PSP models). We are undecided about the PSP Go's success so far and its long-time prospects. Sony's decision to simultaneously support the PSP-3000 and games packaged on UMD while also offering the download-only PSP Go may appeal to retailers (or at best anger them less) but the split confuses consumers. At least Sony's older hardware can still purchase and download games, a benefit if the ultimate goal is a download-only handheld. Moreover, we have seen no significant PSP Go promotions, either at retail or in mainstream media, although that is merely an anecdotal observation. In fact, the primary PSP commercial on television features Gran Turismo and the PSP-3000 model, not the PSP Go. Finally, the $250 cost makes the PSP Go a luxury game system. Few consumers will have any software they can transfer to the PSP Go (in the form of games downloaded from Sony's PlayStation Store), so new owners will then need to spend additional money to play games. Until Sony clarifies its vision for the PSP Go, initiates serious promotion of the system, and reduces the system price, we expect its hardware sales to remain modest. Even beyond the PSP Go, we have strong reservations about the PSP platform itself, strictly on its ability to move software. According to previous reports, the PSP generally accounts for only 4-5% of all software revenue each month, on par with what the PlayStation 2 is still generating as that system begins its tenth year. 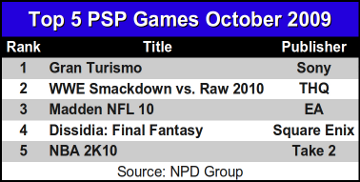 Heavily promoted titles like Gran Turismo, Motorstorm: Arctic Edge, and Grand Theft Auto: Chinatown Wars have failed to reach the top 20 all-format chart. With an installed base of nearly 16 million systems in the United States, it is disconcerting that only one PSP title, Dissidia: Final Fantasy from Square-Enix, has made it into the top 20 games for any given month during the past year. The PSP version of Grand Theft Auto: Chinatown Wars is particularly troubling. The PSP has played host to both Grand Theft Auto: Liberty City Stories and Grand Theft Auto: Vice City Stories, and each has sold particularly well. Yet in its launch month Chinatown Wars didn't even make the PSP software top 10 list at retail – it placed somewhere below #10, the PSP version of LEGO Batman. While it is possible that some of the PSP's retail sales have moved to downloads through the PlayStation Store, we think it unlikely that those sales are the key reason for the weak retail performance. [The preceding analysis was conducted as part of Gamasutra's in-depth NPD article, examining October 2009's U.S. console retail sales.]
Console
Get daily news, dev blogs, and stories from Game Developer straight to your inbox
Subscribe