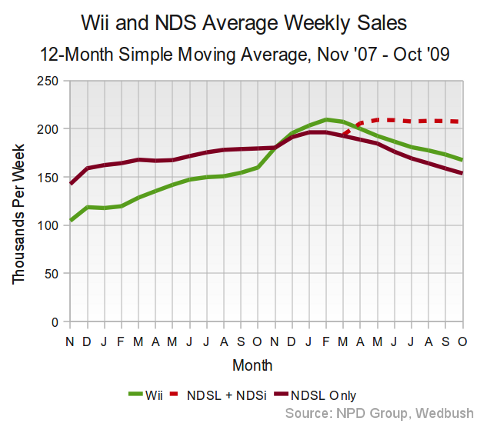 The graph above shows both Wii and Nintendo DS sales and reveals an interesting trend. The running average dropped slightly for both the Wii and the Nintendo DS in March, and Wii has been declining since. The launch of the Nintendo DSi appears to have reversed the trend for the Nintendo DS platform, and in fact the average weekly rate of sales has stabilized at just over 200,000 systems per week for seven months running. When Nintendo last announced consumer sales of the Nintendo DSi at the end of July, the total installed base was 2.0 million systems. In August and September no data was available, but according to data provided exclusively to Gamasutra the average price of all Nintendo DS systems sold in October 2009 was $150. In the absence of retailer promotions, that suggests a 50/50 split between Nintendo DS Lite hardware (priced at $130) and Nintendo DSi hardware (priced at $170). This is completely in line with the trend through July. For the first four months after the DSi launched its share of Nintendo DS hardware sales dropped steadily from 80% down to 54%. Thus we feel confident that the Nintendo DSi now accounts for approximately 50% of all DS systems sold in October. Given these figures, we estimate that the Nintendo DSi has reached an installed base of nearly 2.8 million systems in the United States. That's an immensely strong showing for seven months into a launch, and the only system launches which are stronger included November and December – a benefit that the Nintendo DSi is just now experiencing. (Results of November sales will be available in about one month's time.) Here's a full graph of year to date U.S. hardware sales in millions: 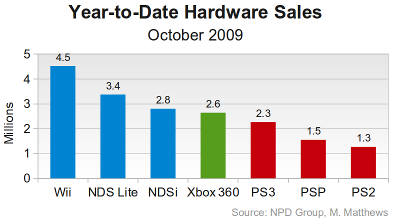 In fact, were we to break our Nintendo DSi estimate out separately, it would be the third best-selling platform of 2009 behind the Wii and Nintendo DS Lite and just ahead of the Xbox 360. Should the current Nintendo DSi sales trend continue and should the Nintendo DS platform overall perform approximately as it did in 2008, then the Nintendo DSi could have an installed hardware base of around 5 million systems by the end of 2009. With a large enough installed base, Nintendo and third parties will move more overtly toward DSi-specific software in the near future. [The preceding analysis was conducted as part of Gamasutra's in-depth NPD article, examining October 2009's U.S. console retail sales.]
Console
Get daily news, dev blogs, and stories from Game Developer straight to your inbox
Subscribe