Analysis: Is It Time For A DSi Price Cut?

Time to cut the price of the DSi? Gamasutra analyzes handheld market trends to explain why Nintendo may need to sacrifice margins in the short term, to drive adoption of the newer system.
Matt Matthews
Blogger
August 17, 2009
[In Gamasutra's in-depth feature analysis of July's NPD numbers, Matt Matthews looks at the handheld market, and explains it may already be time to reduce the price of the DSi, as "it is in Nintendo's interest to spur uptake of the newer system even at the expense of some of its hardware margin."] After only four months, the Nintendo DSi has reached an installed base of 2 million units in the U.S. faster than any system for which we have data. The PlayStation 2 reached 2 million units in March 2001, five months after its October 2000 launch. Microsoft's original Xbox didn't reach the 2 million mark until its sixth month while its successor, the Xbox 360, took seven months, mostly due to supply issues in early 2006. Nintendo's Game Boy Advance and GameCube each took four and a half and eight months, respectively, to achieve an installed base of two million units. The original Nintendo DS took nine months, while its successor, the Nintendo DS Lite, took between four and five. The Nintendo Wii comes close, with essentially four and a half months required to reach an installed base of 2 million systems. With that said, the Nintendo DSi also faces a very strong competitor which has slowly claimed market share over the past three months: the Nintendo DS Lite. 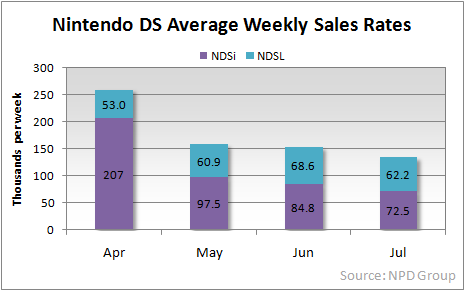 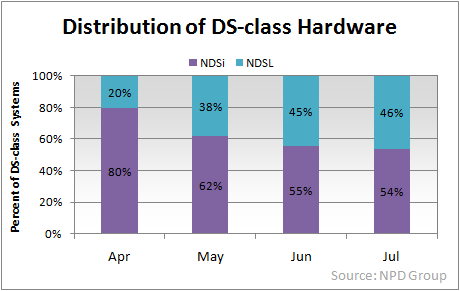 Think of it this way: in April there were four Nintendo DSi systems sold for each Nintendo DS Lite. That ratio dropped to roughly 2-to-1 in May, and then approximately1-to-1 in June and July. This trend suggests to us that Nintendo could consider a shuffle of its handheld line sometime later this year. One option is to drop the Nintendo DS Lite entirely and reduce the Nintendo DSi price to $140 or $150. Another would be to keep both systems on the market but reduce their respective prices. From Nintendo's perspective, we prefer the former plan. We believe the Nintendo DSi provides more barriers to consumer copyright infringement (commonly but imprecisely termed “piracy”) and that it is in Nintendo's interest to spur uptake of the newer system even at the expense of some of its hardware margin. We note that Mr. Michael Pachter, analyst for Wedbush Morgan Securities, came to similar conclusions in his notes on Friday after the release of the NPD Group data. He suggests that Nintendo will cut the DS Lite to $100 and the Nintendo DSi to $150 or lower before the Holiday 2009 season. We concur, but would consider the price cut of the DS Lite to be of the fire sale variety as the focus shifts entirely to the Nintendo DSi. 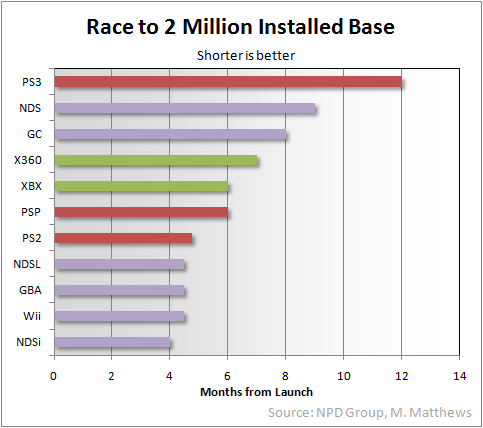 Mr. Pachter goes on to suggest that Sony may reduce the price of its PSP-3000 model to $130 (although the timing is unclear), and that the PSP Go will see a price drop sometime in 2010. Nintendo and Sony's handheld price drops would be independent of each other in the near term. A Nintendo DSi at $150 or lower should hold its own against a PSP-3000 priced as low as $130 and certainly against a PSP Go at $250. Of course, Sony has made it clear– through pricing and its download-only software model – that it is focusing on the early-adopters to prime the PSP Go market. So Nintendo's pricing strategy on the low end may not affect the PSP Go in the early months, but it does set a price target that Sony will have to watch as it offers less expensive PSP Go systems in 2010. Gamasutra's full feature includes much more analysis, trends and insight from analyst Matt Matthews on the July numbers, plus essential takeaways as the industry prepares for the holiday season (no registration required, please feel free to link to this feature from other websites).
Console
Get daily news, dev blogs, and stories from Game Developer straight to your inbox
Subscribe