SEARCH
A minimum of 3 characters are required to be typed in the search bar in order to perform a search.
PC
5 min read
News 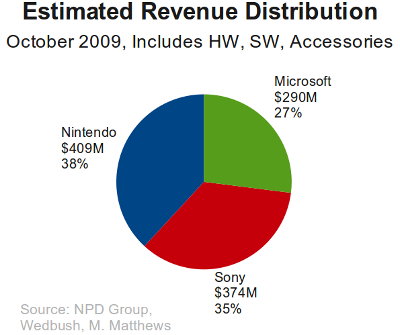 We clearly can't put all the market's present difficulties at the feet of Nintendo, but when one company accounts for half of the revenue in an industry for a whole year, that company's fortunes the next year will likely determine much of the direction of the market. The whole market, including Nintendo, Microsoft, Sony, and all the third parties, is struggling. The big question left for this year is not whether the industry will contract in 2009 but by how much. Let's run down some key measures. Music Games – The collapse of the music game market is now well-known, but October's sales figures brought with it new evidence of the crisis the genre is experiencing. Not only did Guitar Hero 5 and The Beatles: Rock Band fail to make the top 20 chart, but those games almost didn't make it into the top 10 games on any given platform. Only the Wii version of The Beatles: Rock Band made that platform's top 10 list, at #7, behind Cabela's Big Game Hunter 2010 by Activision. With DJ Hero sales coming in just over 120,000 units across four platforms, the evidence for consumer fatigue grows each month. Software Unit Sales – At the end of October 2009 just over 150 million units of software had been sold in the U.S., down 8.5 percent from the same time in 2008. 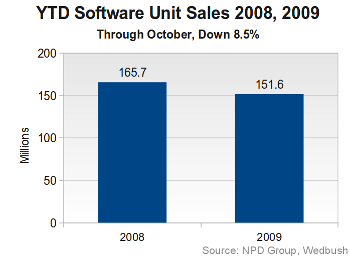 Even given the scale of the Call of Duty: Modern Warfare 2 launch, this deficit will be extremely difficult to make up by the end of the year. Nearly 103 million units of software were sold in November and December 2008. Software Prices – The average sale price (ASP) for software so far in 2009 is $39.03. At the end of October of last year the average price of software in 2008 was $40.84. During 2008 the price of software rose as consumers purchased millions of music game bundles and Wii Fit balance boards. The single-month software ASP in October 2008 was $47.29, over $3.50 higher than it was in October 2009. 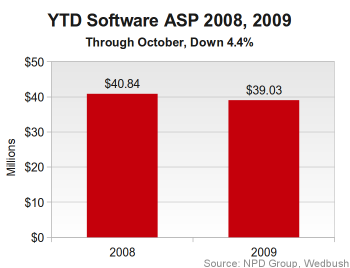 Together the drop in software volume and price has contributed to a 12.6 percent drop in total software revenue during 2009. Hardware Unit Sales – The Xbox 360 is the only console whose YTD sales are up in 2009. The PlayStation 3 is still down for the year, but its price cut gives it a chance to post annual growth by the end of the year. Wii system sales were so extraordinary in 2008, it seems unlikely that it will best that record this year. (Regardless, it will still have very strong sales.) The PlayStation 2 is still riding its slow decline. Nintendo DS sales are still up over the same time in 2008 while PSP sales are off by 34 percent. 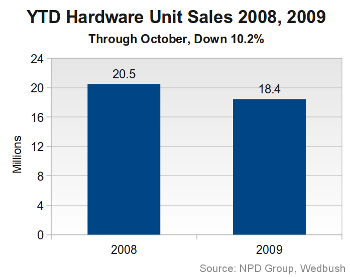 Hardware Prices – Every console has seen a price cut or adjustment this year. The PlayStation 2 dropped to $100, the PlayStation 3 to $300, and the Wii to $200. The Xbox 360 Elite had its price cut to replace the old $300 Pro model. Only the handhelds have seen prices increase in 2009 with the introduction of newer, more advanced models. As a result of these changes, the price of the average system sold in 2009 has dropped to $214 from $231 at the same point in 2008. 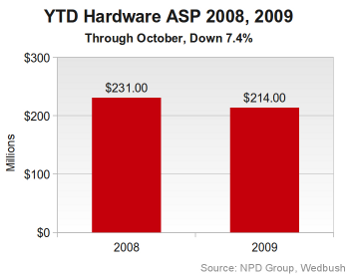 Taken together, the contraction in the hardware market and the drop in hardware prices have put total hardware revenue down by nearly 17 percent for the year. It is true that some of the biggest releases of the year – namely Call of Duty: Modern Warfare 2, Assassin's Creed 2, and New Super Mario Bros. Wii – have either arrived or are about to hit retail, and the figures above do not reflect those revenues. However, the deficit at this point is so severe that it's difficult to comprehend how total revenues will come in above last year's figures. To put it as simply as we can, if we copied last year's November and December to this year, the total revenue for the year would only come to $19.6 billion. Given that seven of the last eight months have shown double digit declines from 2008, and external factors like unemployment have only gotten worse since the beginning of the year, reaching $19.6 billion – much less $20 billion – would be amazing. [The preceding analysis was conducted as part of Gamasutra's in-depth NPD article, examining October 2009's U.S. console retail sales.]
Console
Get daily news, dev blogs, and stories from Game Developer straight to your inbox
Subscribe