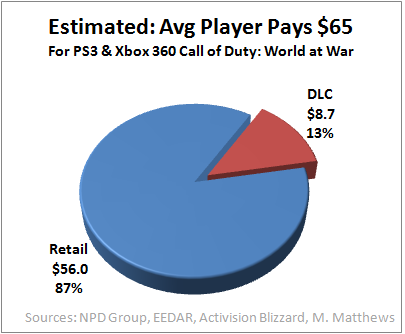 We estimate that in the U.S. the average PS3 and Xbox 360 Call of Duty: World at War consumer has paid approximately $65 for the game. This takes into account the PS3 and Xbox 360 consumers who bought only the game along with those who bought one or more map packs. In effect, the DLC sales have increased the revenue per software unit by 15%. There are several assumptions we've made along the way. First, we have neglected Windows PC sales of Call of Duty: World at War. While the retail sales figures we have cited did not include that version of the game, it is not perfectly clear whether those figures were included in the map pack download totals that Activision Blizzard publicized. We don't believe so, but cannot be positive. If one must consider Windows PC sales, the situation becomes even more difficult to track since that version of the game was sold at retail and through both Valve's Steam and IGN's Direct2Drive digital distribution systems. With Modern Warfare 2 expected to best World at War's 11 million units in sales, it seems certain that consumers will again be tempted with paid DLC throughout 2010 as Activision Blizzard attempts to maximize its revenue per sale.
Console
Get daily news, dev blogs, and stories from Game Developer straight to your inbox
Subscribe