As part of his monthly NPD review, Matt Matthews notes how year-to-date Wii software revenue is down 25%, a decline partly due to evergreen first-party games (
Matt Matthews
Blogger
March 15, 2010
[As part of his monthly NPD review, Gamasutra analyst Matt Matthews notes how year-to-date Wii software revenue is down 25%, a decline he attributes to evergreen first-party games (Wii Fit) that "are beginning to weaken somewhat."] In our NPD analysis this month, we've noted a drop in total software dollars for the current-generation systems – the Wii, Xbox 360, and PlayStation 3. However, there is more detail within those figures that is worth examining. As Michael Pachter has noted over the past few months, software sales on the Xbox 360 have remained flat relative to the same period last year while PlayStation 3 software sales have experienced solid double-digit gains. Simultaneously the year-to-date revenue for Wii games is down nearly 25%, from $500 million to around $380 million. At least $60 million of the difference can be accounted for by the drop in demand for Wii Fit and Wii Fit Plus. In fact, across Nintendo's key evergreen first-party franchises, it appears that sales are beginning to weaken somewhat. (Some analysts believe that this may actually be due to shortages of hardware-reliant Wii SKUs such as Balance Board and MotionPlus devices, but we'll know more about this as the year continues if we see a bounceback.) The graph below shows just how the January – February software revenue picture has played out in 2009 and in 2010. (Note that the overall rankings remain the same (that is, the Wii is still leading the Xbox 360, which is itself ahead of the PlayStation 3), but the race has tightened significantly.) 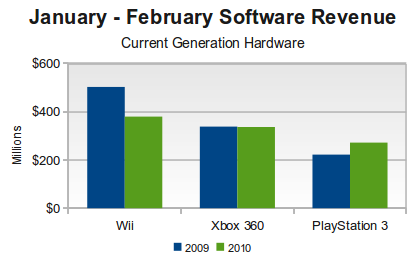 Pachter raises a red flag on the Wii's software picture, saying that the problem “runs deeper” than just the recent hardware declines. He observes that Super Mario Galaxy 2 is the only major software release in the near term, and that he believes that Wii owners have become more discriminating about their software purchases (as shown in the recent weaker sales of previously robust titles like Wii Fit and Wii Play). Moreover, he notes that the Wii software tie ratio is declining over time – an indication that hardware purchases are ahead of software. This last point – on the tie ratio – deserves a bit of explanation. For a system like the PlayStation 3 where hardware sales are rising quickly year-over-year, a declining tie ratio is to be expected. But if Pachter in fact means that the Wii tie ratio is declining through January and February of 2010 – a period when its hardware sales are down year-over-year – then that means that software sales are also falling, and perhaps quite dramatically. This is where one could make an argument that a different mix of first- and third-party software, like what one finds on the Xbox 360 or the PlayStation 3, helps smooth out some of the software dynamics from month to month. As an example, we know that 95% of the Xbox 360's software revenue during 2010 has come from the sale of third-party software. Contrast this with the situation the Wii, where we can estimate that at least 33% of software revenue in 2010 has come from first-party titles, based only on the titles appearing in the top 20. It is no surprise, therefore, that Microsoft is keenly focused on making third-party publishers welcome on its platform. In a month when third parties falter, so too will Microsoft's software revenues and thus Microsoft's licensing fees. In early 2010 we are seeing that Wii software sales have dropped, probably driven by the slowdown in first-party Wii software titles. We expect that Sony's software mix falls somewhere between these two extremes. After all, it had three first-party titles in the top 20 in February, and will no doubt add God of War III in March. Meanwhile, as on the Xbox 360, third-party titles like Modern Warfare 2 and BioShock 2 continue to sell reasonably well on the PS3. Unfortunately for Sony, they still have the lowest software revenue overall, which is a humbling position for the company that led so decisively during the PlayStation 2 era. So as Sony and Microsoft ramp up their motion control platforms later in 2010 and the Wii consumer (presumably) becomes more discerning, there is at least some possibility for a fundamental shift in momentum. Aggressive cuts by Sony have pushed Microsoft to shuffle the cost of its core hardware. As a result the Wii no longer enjoys the same price advantage that it once had, and soon it will also cease to be the only motion control system on the market. Should Microsoft or Sony capture any mindshare with the casual consumers brought to the market by the Wii, games like EA Sports Active 2 and Ubisoft's Just Dance could sap some of the sheen of exclusivity previously held by the Wii.
Console
Get daily news, dev blogs, and stories from Game Developer straight to your inbox
Subscribe