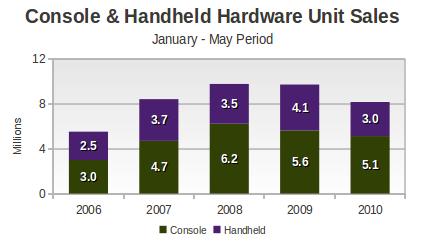 The next figure, which represents the same data but split by manufacturer, makes it clear that Microsoft's hardware sales (in January through May) have remained solid throughout the past five years. As sales of the original Xbox ended, the Xbox 360 smoothly picked up and has managed modest increases for the past three years. 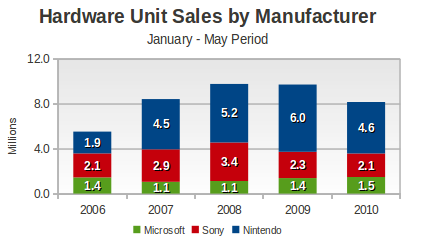 Sony's situation is a bit more complex. The transition from the PlayStation 2 to the PlayStation 3 has been a struggle, and only from January – May 2009 to January – May 2010 can we say that PS3 sales made up for the aging PS2. Over all of this was a rise and decline of the PSP, and the PS3 became Sony's dominant platform only in September 2009, nearly three full years after it launched. Of course, unit sales are only one view of the hardware market. As system prices have fallen – or in the case of the Nintendo DS, risen – the amount of revenue generated by the hardware segment has varied. The figure below demonstrates that, even as hardware sales held steady in the first five months of 2009 (as compared to 2008), the money generated by those sales actually decreased. 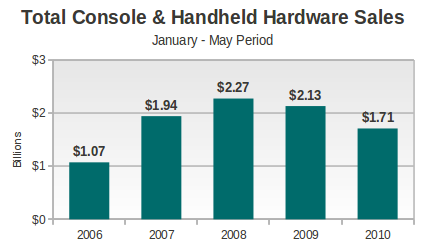 Much of that 6% drop from 2008 to 2009 comes from a rather surprising source: the Nintendo DSi launch. As its unit sales helped keep the industry hardware total stable across those two years, its $170 price is lower than the average hardware price for the entire industry, thus pulling total revenue down despite its robust sales. By the beginning of 2010, both the Nintendo Wii and the Sony PS3 had gotten price drops of about 20% and 25%, respectively. This jibes well with the 20% decline in total hardware revenue for the first five months of the year, but the underlying dynamics of the revenue picture are more complicated. It would appear that PS3 sales have increased so much in the first five months of 2010 that the system has generated roughly the same amount of revenue, despite the price cut. The Wii on the other hand has a lower price and sales, which means it contributed to most of the decline in hardware revenue this year, in the neighborhood of $400 million. The bottom line on 2010 hardware: The Wii price cut and subsequent lower sales during the January to May period has cut revenue significantly while the PS3 has not made up for the long term erosion of PS2 and PSP unit sales and revenue. Microsoft has maintained modest growth in unit sales, and is least to blame for falling hardware revenue.
Console
Get daily news, dev blogs, and stories from Game Developer straight to your inbox
Subscribe