Despite belonging to a genre typically favored by male players, Tencent’s massively popular mobile game is mostly played by women.

A report assembled by Bloomberg dives into the numbers for a handful of MOBAs, including Tencent's Honour of Kings, to examine what slice of each game's player base is comprised of women. While the report doesn't offer developers a fool-proof way to make a game appeal to both men and women, it does offer an interesting glance at the gender ratios behind different "hardcore" games and genres.

According to that info, Tencent’s mobile MOBA Honour of Kings boasts a player base made up of 54 percent women. Overall, the game is played by over 200 million people and has its biggest following the China.

On the other hand, Bloomberg reports that women only make up as much as a third of players for most “hardcore” games, which it defines as MOBAs and first-person shooters on both console and PC. Of those, League of Legends is the has the second highest women-to-men ratio after Honour of Kings with 35 percent.

As for what exactly attracted 108 million women to the Honour of Kings battlefield, Tencent hasn’t officially commented. But analysts speaking to to Bloomberg believe that the surge of female players could be thanks to anything from Honour of Kings' more accessible and social take on the MOBA structure to an overall shift in video game trends. 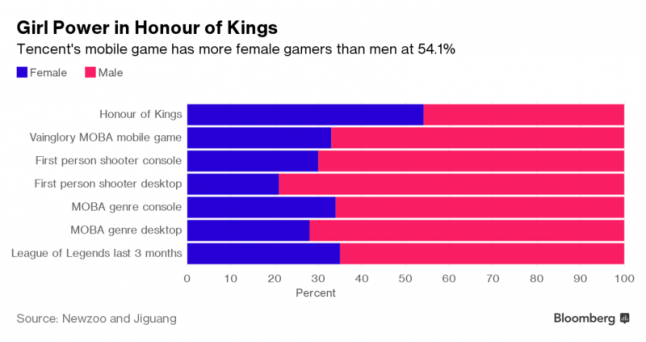