Snapchat has unveiled its long-rumored game platform, and announced the first developers partnering with the company to bring social games to the service.
Alissa McAloon
Editor-in-Chief
April 04, 2019

Snapchat has unveiled its long-rumored game platform, and announced the first developers partnering with the company to bring social games to the service.

That new service is Snap Games, a platform that aims to offer up a library of titles that claim quick and frictionless social gameplay their first priority. Snap Games itself is baked right into Snapchat, meaning that the games that appear on the platform are dropped into the hands of any of the social app’s existing users.

During its Snap Partner Summit today, Snapchat highlighted that one of the big goals behind this project was to ensure that mobile games could offer something akin to classic couch co-op gameplay or the kind of social experience of playing a game at an arcade. To accomplish that, any titles hosted on Snap Games are launched from Snapchat’s Chat menu and require no additional downloads for players to jump in.

Snapchat’s existing text- and voice-based chat features are also used by any games featured on the service and players will be able to invite and see friends already playing the game from right within their chat menu, features that Snapchat says aim to combat some usual annoyances found in multiplayer mobile games.

The first six games are set to go live on Snap Games today, including one called Bitmoji Party made by Snapchat’s own internal development efforts, with a helping hand from Fruit Ninja designer and now Snap Games head Luke Muscat. 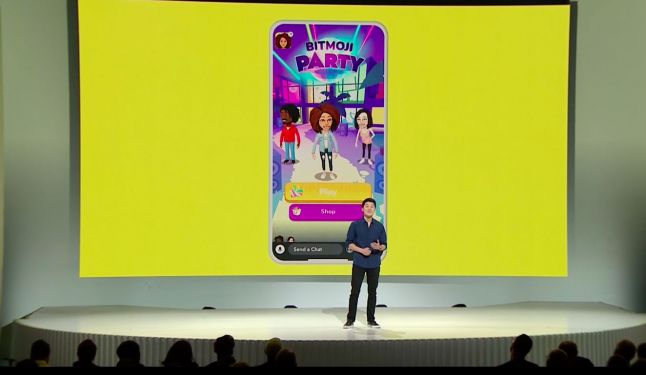 The five other devs partnering with Snapchat for its first batch of games include Zynga for the battle royale game Tiny Royale, Game Closure for the game Snake Squad, Zepto Lab for C.A.T.S Drift Race, PikPok for Zombie Rescue Squad, and Spry Fox for the collaborative puzzler Alphabear Hustle.

Currently, it looks like Snap Games is a somewhat exclusive club, but Snapchat did note that it is looking to seek out partnerships with other developers to create new games for the platform in the future.

During the presentation, Snapchat also mentioned that it already has an “ad experience” in effect to monetize games on the platform from day one, has yet to dive into any specifics on monetization.