Google has introduced a new developer tool aimed at encouraging Android users to update apps to the current version though in-app prompts.

The tool, very appropriately dubbed the Google Play in-app update API, gives developers the ability to display dialog boxes in unupdated Android games or apps that either encourage players to update their copy to the latest version and allow them to do so while the app is still running.

As detailed in the Android Dev Summit, The API comes in two flavors: immediate and flexible. Immediate displays a full-screen message right when a player boots up an Android app that prompts them to update the app. That update is then downloaded and installed right then and there, from within the app itself.

The flexible option gives devs the ability to nudge app users towards updating to the latest version of an app through more subtle banners in the app. If a player opts into the update, the new version is then downloaded in the background while the app remains running and can either be installed once it’s complete or the next time the app is minimized or closed.

Right now, the in-app update API is being tested through the Android Google Chrome app and with select partnered developers, but Google plans to expand that early access program in the near future. 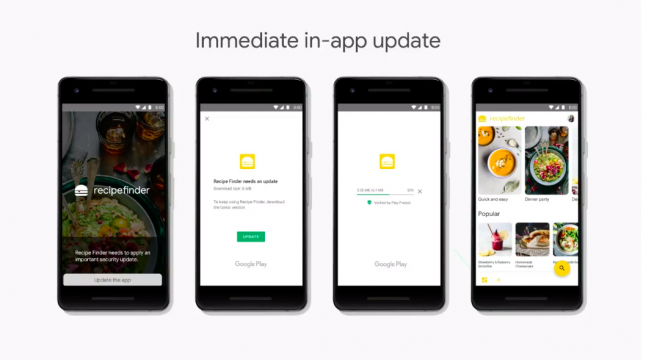