GDC State of the Industry: For the first time, devs favor Android over iOS

We dig deeper into the many findings of the 2017 Game Developers Conference survey of over 4.5k devs, and find some surprising insight into which game platforms are most popular right now.
Alex Wawro
Blogger
January 18, 2017

Results from the fifth annual Game Developers Conference State of the Industry Survey are in, revealing trends in the games industry based on the feedback of more than 4,500 game developers ahead of GDC 2017 in February and March.

Last week we pointed out how the survey results suggest that game developers are feeling optimistic about Nintendo’s upcoming Switch console, and are unsure about the prospects of mid-cycle console refreshes like the PlayStation 4 Pro and Xbox’s “Project Scorpio.”

Today, we'd like to dig a little deeper and talk about what the survey reveals about which platforms devs are most interested in making games for. For years now, mobile devices and the PC have earned the majority of devs' interest in our surveys; the same holds true this year, but there's a big change: for the first time ever, more devs said they're making games for Android than for iOS.

The 2017 State of the Industry Survey is the fifth entry in the ongoing series of yearly reports and serves as a snapshot of the games industry and illustrates industry trends ahead of GDC in San Francisco. Organized by the UBM Tech Game Network, GDC 2017 takes place February 27th through March 3rd at the Moscone Convention Center in San Francisco, California.

2016 marked the commercial debut of several high-profile VR headsets, so it’s not surprising there was a big uptick year-over-year in the number of devs who said they’d shipped a VR game. But PC and mobile remain the most popular platforms by far; when asked which platform(s) they’d released their last game on, 45 percent of respondents said PC/Mac and 35 percent said smartphones/tablets. 19 percent said PlayStation 4/4 Pro, and 15 percent said Xbox One.

13 percent said their last completed game was released on VR headsets, a significant jump from the 6 percent that said so last year.

In terms of what platforms everyone is focusing on now, the breakdown is roughly similar: 53 percent of those surveyed said they’re currently working on a game that will be released on PC/Mac, and 38 percent said their current project will see release on smartphones/tablets. 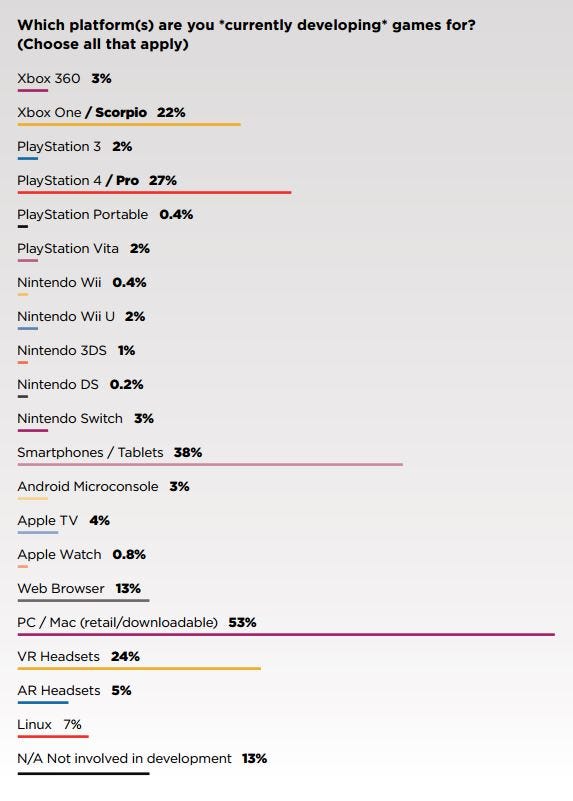 Last year, 23 percent of respondents said they were currently making a game for Xbox One and just 16 percent said the game they were making was going to come to VR headsets.

Nintendo’s new Switch console is also expected to debut this year, so it’s interesting that 3 percent of respondents said they’re currently working on a game that will release on Switch and 5 percent said they expect their next game will be released on Switch.

For years now the GDC State of the Industry survey has been asking respondents which mobile platform they make games for, and iOS has always come out on top -- until now.

This time around 54 percent of respondents said they’re currently making a game for Android, while 51 percent said iOS. That’s a small but significant shift from last year, when 56 percent said iOS and 55 percent said Android. (Note again, that this year we opened up the survey to countries outside of North America, which may have played a role in the shifting interest.)

A more detailed analysis of the survey can be found in the GDC 2017 State of the Industry Survey whitepaper. For more information on GDC 2017, visit the show's official website, or subscribe to regular updates via Facebook, Twitter, or RSS.