According to data gleaned by mobile analyst Sensor Tower, Nintendo has officially crossed $1 billion revenue generated on mobile, a platform it really only started to embrace a little over threeÂ years back.
Alissa McAloon
Editor-in-Chief
January 28, 2020

According to data gleaned by mobile analyst Sensor Tower, Nintendo has officially crossed $1 billion revenue generated on mobile, a platform it really only started to embrace a little over three years back.

The firm estimates that 61 percent of that $1 billion was generated by the free-to-play gacha game Fire Emblem Heroes, a longtime leader of the company’s mobile catalog by both Nintendo and third-party analysts’ prior admissions.

Heroes and its estimated $656 million revenue is trailed by Animal Crossing: Pocket Camp with $131 million revenue, and Dragalia Lost, a new IP created for mobile, with $123 million.

While the rankings and each revenue estimate come from Sensor Tower rather than Nintendo itself, Sensor Tower’s numbers paint a picture of Nintendo’s mobile journey so far, something made particularly interesting due to the fact that the company hasn’t locked itself into a single monetization scheme.

The company continues to deliberately diversify its monetization plans, previouly noting that it decides based on which method fits each property, the game’s mechanics, and the needs of each audience. Nintendo isn’t opposed to shifting those plans once a game is out of the gate either, as made evident by the paid subscription plans rolled out to Animal Crossing: Pocket Camp and Mario Kart Tour after release. 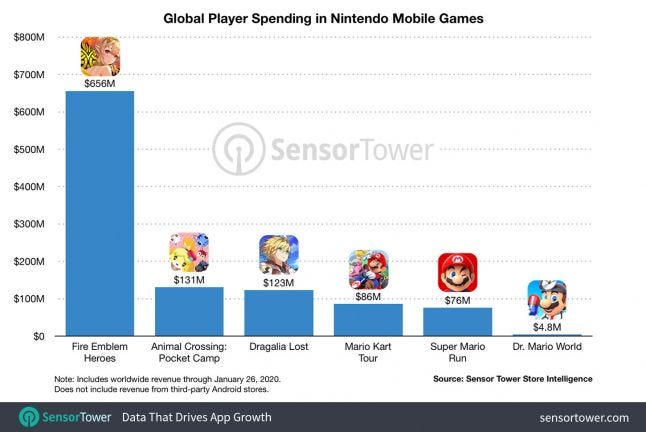