Analyst: Clash of Clans claimed the most consumer spend of any mobile game this decade

Supercell's Clash of Clans leads the pack in terms of consumer spend generated between 2010 and the close of 2019, at least according to numbers from the mobile game analytical firm App Annie.
Alissa McAloon
Editor-in-Chief
December 16, 2019

Supercell’s Clash of Clans leads the pack in terms of consumer spend generated between 2010 and the close of 2019, at least according to numbers from the mobile game analytical firm App Annie.

The developer claims two spots on App Annie’s spending roundup, the only studio to do so, and sees Clash of Clans ranked as the fifth most downloaded game of the decade.

The full App Annie report tracks top apps in terms of both worldwide downloads and consumer spend for the current decade, both across mobile games and apps as a whole.

While the company notes it lacks Android data for the first two years of the decade, the report offers a peek at which games performed the best during the bulk of mobile’s lifetime.

Kiloo’s Subway Surfers beat out Candy Crush Saga as the most downloaded game of the decade, an upset App Annie attributes to a strong showing for that particular title in India.

King’s Candy Crush Saga is one of only two games to appear on both the top consumer spend and top downloads list. More details on those and insight into the decade as a whole can be found in the full report. 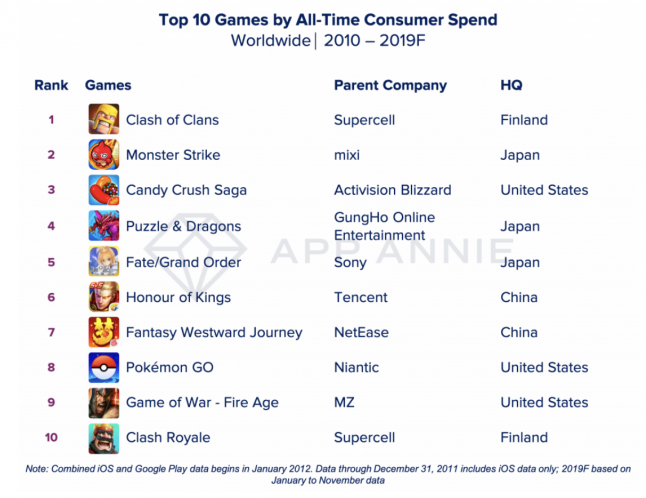