A patent application filed by Sony last year detailing a VR headset that could detect adverse reactions to virtual reality has been published for all to see.
Alex Wawro
Blogger
September 19, 2018

A patent application filed by Sony Interactive Entertainment last year detailing a VR headset that could detect adverse reactions to virtual reality has been published for all to see.

The application, noticed by UploadVR after it was published by the United States Patent and Trademark Office last week, details a virtual reality headset that, rather than attempt to reduce motion sickness triggers from the get-go, uses several biometric sensors to sense whether a VR user is experiencing signs of simulation sickness during a gameplay session.

Those features include a heart rate sensor, eye tracking camera, moisture sensor, thermometer, and a host of others listed in the diagram below that would seek to establish a baseline for a user’s health, then later detect if a user is distressed or showing any of several known adverse reactions to VR (also detailed in the diagram below) during a play session.

Following that, the VR headset would aim to identify the possible health concern and display a warning through the headset’s displays or headphones, disable certain VR features, contact external parties for assistance, or trigger an alarm of some sort to gain the attention of those around the player.

“Users of head-mounted displays (HMDs) often experience nausea and other symptoms often referred to a 'virtual reality sickness.' Various health and biometric sensors are employed to gather baseline sensor measurements. The HMD or a device associated with it can then generate a range or threshold such that any future sensor measurements that fall outside of the range or cross the threshold suggest a health concern for the user of the HMD,” explains the patent application. “The HMD can also be coupled to a microphone, and natural language processing (NLP) is employed to detect negative words or noises made by the user that could also suggest a health concern for the user.” 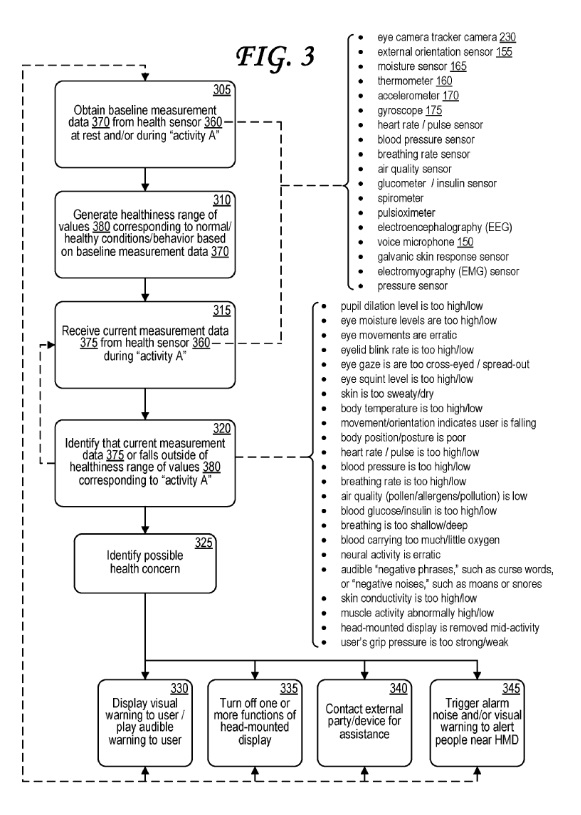