Q&A: Designing Flutter VR, a game unapolegetically made for women

Runaway Play's Zoe Hobson and Emma Johansson chat with Gamasutra about their VR game Flutter VR, what making a game for women means these days, and the state of the New Zealand game industry.
Kris Graft
Publisher
December 15, 2017

Flutter VR, the latest offering from Dunedin, NZ-based Runaway Play, is a virtual reality game for Google’s Daydream platform that promises to be “unapologetically made for women.”

The game sees players peacefully exploring the Amazon rainforest as a researcher, and making friends with Barbara the Capybara (missed opportunity to call her Capybarbara). Runaway Play is also run by women and has nearly achieved gender parity on its staff.

I sat down with managing director Zoe Hobson, and creative director Emma Johansson, to chat with them about what making a game for women means these days; in short, it means focusing less on gender stereotypes and more on making a game for the busy lives led by young and middle-aged women.

We also discussed the New Zealand gaming scene and how a recent political sea change there might affect the fortunes of NZ game dev.

Cross: Emma, in your press release you say that "Flutter VR is unapologetically a game made for women." Despite the gloominess of our age and the nastiness of some sectors of the tech community, I think it's safe to say we're living in a renaissance of games about/by/for women. In that context, what does "unapologetically" mean now; what separates Flutter VR from other games--even just in the VR space?

Hobson: We agree that it’s so positive to see the narrative changing around games for women. However we also think it’s still important to recognize that we have not yet come far enough. Even in the launch of this game we have received a small number of complaints about the fact that it’s been made for women.

And so we must reiterate that we are not apologizing for creating something for an audience demographic that is both growing globally, but is also a huge part of our mobile gaming community (80 players of our other three mobile games' players are women). 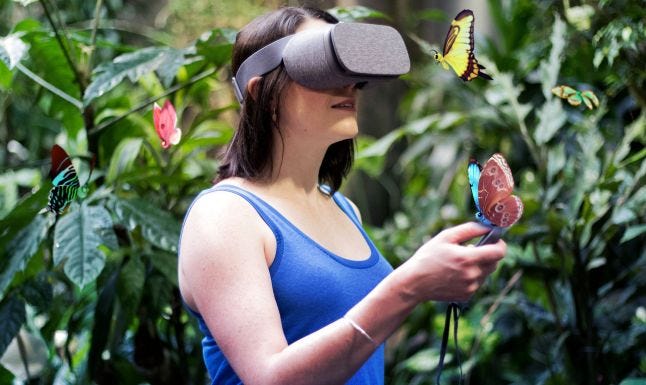 Johansson: In terms of “unapologetic” we also mean that this game has been created very deliberately for women, right from every design decision. It hasn’t just had a female character slapped into a game at the last minute.

We designed the gameplay sessions to be 20 minutes long, perfect for our busy female demographic at the end of a day. We designed the story narrative based around the value of creating time for yourself - something we know many women struggle with, and countless blog articles rave about. We designed the game experience to be relaxing, calming and peaceful - something we know from our other games that our audience really cherishes in a gaming experience. It's unapologetic because we are proud to be doing this.

What separates Flutter VR from other games is the way that we approached it.

Cross: In the same press release Emma said, "It’s all too easy for us as developers to design for the world we are accustomed to living in, in the way we are used to experiencing it." That's a design philosophy that should be embroidered on the tea towels at every gaming studio! But what does that look like in Flutter VR? As we all know, gender is not the only place a "comfort zone" might exist in the world of design.

"It is our belief that great game products can be created and grown while maintaining good work life balance, and that overtime should be very rare."

Flutter VR's setting and conceit--exploration of the Amazon--keys into some rather old, and some might say troubling, colonial narratives about European exploration (the safari, etc.) Clearly you're going in a different direction; this is a game about a scientist who is peacefully interacting with and studying nature, not exploiting it. But were there other things you did to decenter what you knew, or what you thought you knew about places like the Amazon rainforest?

In short, how do you pay attention to issues of race/nationality as well as gender?

Johansson: In terms of our design philosophy, we have done our best to decenter ourselves in our approach to the game.  For inspiration we sought input on the Amazon from a number of diverse sources including children's literature, documentaries, blogs, brochures, conservation and commercial websites, books, historic accounts, local and indigenous stories, as well as current research.

One particular source that we loved was a recent Conservation International video called Under the Canopy, which presents the Amazon visually in 360 degree video and is narrated by an indigenous guide. This may seem extensive, but we’re convinced that each source was valuable in helping us step beyond our established gaming perspective.

When choosing mechanics during prototyping, we were user testing constantly to see not only what WE thought worked and would make an enjoyable experience, but what our potential players thought worked. Quite often we found that our “great ideas” didn’t work how we had imagined in practice, and other ideas came from our players’ reactions to mechanics. We also tested with people of multiple ethnicities, gamers/non gamers and in an age range of 18 to 65, to try and see our game from multiple viewpoints.

In the beginning of the project when we defined the target audience we started with 25-40 year old women, passive “non-gamers”, first-time VR users. We also added targets of creating the game for:

This influenced our design decisions. For example we decided to enable the player to change their view by clicking on the sides of the controller so that players with limited motion could feel like they had a full movement control within the game. This led us to work alongside Southern Rehab, to test our game with patients with very limited mobility so that we could consider accessibility issues.

In terms of our approach to the Amazon rainforest itself as a setting for the game, the narrative and content was heavily driven by our researcher, Jonas. The way we approach our games, since they are all based on nature, is to begin with scientific research and available first-hand accounts, and then build the narrative on-top of this. This approach helps us stay true to our content, tempers our individual perspectives, and more often than not delivers surprises and personal connections to players.

One of our key design pillars was to illustrate the meaningful interaction with nature. Especially in relation to the Capybara friendship. You have to work to respect its space before building a friendship and becoming close with it. 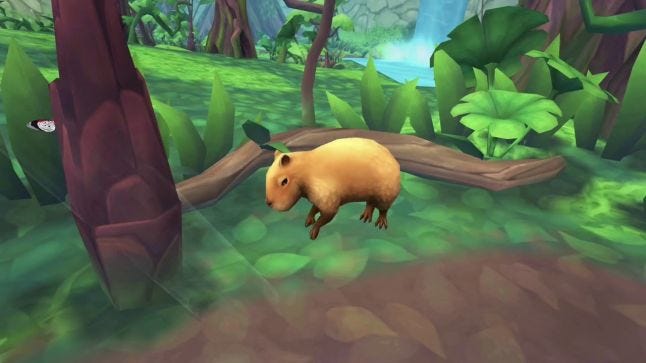 In terms of the player character’s race, we wanted to keep this ambiguous. Our character is from New Zealand, which means she’s coming to the Amazon from an outside perspective, like much of our audience, but she could be a multitude of ethnicities.

In the first-person view of VR, you are the character so you can’t see the form of yourself at all. We did decide to depict her in the journal however, as we felt this was impersonal enough to push players to consider her perspective through the writing, without stepping on their individual sense of self.

In the journal there are scattered hints about her relationship and sexuality. She’s a lesbian, but we didn’t want it to be the defining thing about her.

Cross: It's a season of change in New Zealand, it seems. There's a happy symmetry between [newly elected Prime Minister] Jacinda Ardern's ascent and Runaway Play's all-women leadership and near gender parity on staff. Are you hopeful that the incoming government will take NZ's gaming scene more seriously? What role do you want to play in improving the gamedev scene for the whole of New Zealand?.

Hobson: While there aren't any dedicated games funds in NZ, several studios get government R&D support and the new government has expressed interested in talking with the NZ Game Developers Association about further industry support.

The new government has a proposed 10 year plan in development for the screen and film industry, and the NZGDA would love to see games included in this (both myself and Lisa from Runaway sit on the NZGDA board). Jacinda Ardern has visited game development schools like Media Design School, and the new Minister of Broadcasting and Digital Media Clare Curran has visited game studios like Rocketwerkz.

So yes, we are hopeful that the new government will recognize the value of the NZ gaming scene as it moves forward with new legislation.

In terms of the role that Runaway wants to play in improving the game dev scene, first and foremost we want to look after our current staff by providing an excellent environment to work in. We want to have happy, healthy staff, avoiding the far-too-common industry “crunch” and burnout. It is our belief that great game products can be created and grown while maintaining good work life balance, and that overtime should be very rare.