Why I removed In-App Purchases and Ads

These are the learnings and considerations about ads and in-app purchases, which I made while working on my very first live project - Trash Invasion. Mainly answering the question why my project does not need to use any IAA or IAP monetization.
Vesko Tenekedzhiev
Blogger
June 17, 2021

During the development of Trash Invasion I have researched different articles and guides about adding In-App purchases and ads to my game. One thing, those articles have in common is that, having these two monetization strategies should be on the radar of every serious mobile games developer. Or should it?

Times have changed during the past few years. The app stores are flooded with apps and the chances for an indie game developer to get noticed, are low. Moreover with so much content out there, users have become picky about apps and they know what to expect from an app before even downloading it. Only by looking at its feature video, game screenshots, number of downloads and rating. Players don't even look at the description. Two things, which are highly visible, are the tags "contains in-app purchases" and "contains ads". The first tag most of the times is interpreted by players as "Pay to Win", "Slow Progress" or "Long Waiting Times". While the second, about the ads - as "Annoying", "Inappropriate", "Fun/Game Immersion Killer", etc. Now there are games, of course, which blend the gameplay with their purchases and ads quite well and those games are very successful. Still the mindset of users about those two aspects remains for most of the games on the stores.

I have integrated In-App purchases and ads for Trash Invasion as one of the major features of the game, because well yes, our hard work as developers needs to be paid somehow, right? However, there is another aspect, which is more important than the monetization and it is the visibility. Yes, number one goal of the indie devs out there is making their game visible to as many people as possible. And that means making the game completely free (for a first game that's ok, you need people to get to know your name out there). And secondly - get rid of In-App purchases and ads. No one needs them, no one would buy them anyway, even if they do, numbers would be extremely low. Ads will turn away your scarce audience.

And I removed the IAP and IAA features...

Here is the in-game shop of Trash Invasion, using rewarded videos and IAP for packages. It used cakes as currency, which could be unlocked through gameplay or bought from the shop. Those cakes were able to help you collect more monster characters. You can see, I even thought about involving some sort of charity cause to gain the trust of the users. This was added later, after I realized that making money is not the main thing here.

The shop screen below, where you could directly buy the monsters.

So I have completely removed the ads and purchases and all related features to them. It felt good actually, the game became a full product with all features accessible through play. No more dealing with dashboards, plugins, etc. And it was easier to even get the Google Play badge - "Family Friendly", as well as broader audience reach, because now the limitations related to purchases or ads content dropped. It all means that, now the game is more accessible in those regions where purchases are not allowed, third party app stores, which don't have purchases and ads and of course my audience reach easily became - USK All Ages. I am aware that there are ads tailored for children as well, but I still think that parents would prefer clean and ad-free game in most of the cases. 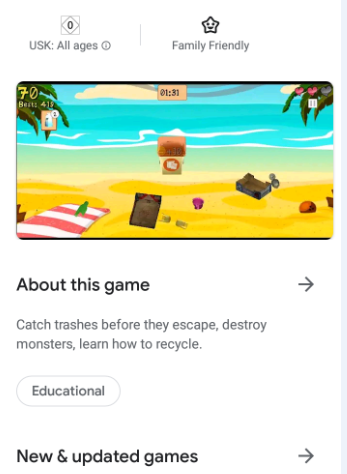 Since this is a first project, the statements above are only assumptions about what would help with the visibility and willingness from the users to try the game in the long run. But I haven't tested any of this if it will work out well or not. Need to see.

And the last question is, how do we make money then? Well, I don't expect making any money with this first project. It was a great experience learning about different aspects of mobile game development and self publishing, which is very rewarding already. I have made different own games throughout my career as a developer, but none was so mature and close to completion as Trash Invasion. The features for In-App Purchases and Ads are still part of the game, so they are easy to activate if needed in the future or combined with another monetization strategy.

You can find the original post on my itch.io dev log space with more articles and information about my project Trash Invasion: