In August I spoke at a workshop at the White House (well, technically the Eisenhower Executive Office Building next door to the West Wing) with some fellow game developers, a group of neuroscientists and cognitive psychologists, and some government agency representatives.  Its official title was “Enhancing Well-being and Attentional Control through Games and Interactive Media:  A Neuroscientific Approach”, but ranged over many related topics.  The conference was organized as a workshop through a series of short presentations, usually by one game developer and one scientist/researcher, followed by a larger panel discussion, with further discussion between sessions.

The building we met in was pretty spectacular, both on the outside: 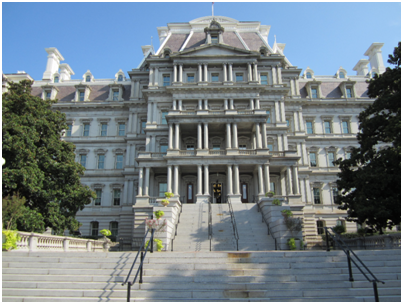 And in the Indian Treaty Room where we met, a two-story space with gorgeous detailing from the ceiling to the floor.  Eisenhower did the first televised press conference from this room and I learned that Jackie Kennedy had saved it from being torn down.  The sense of excitement of being in the building reminded me a lot of working at Skywalker Ranch - with a tad more security - and the Main House DOES resemble the White House, particularly in the exterior columns and inner detailing. 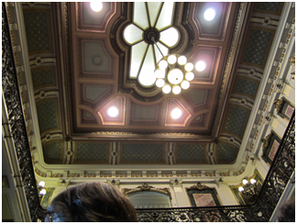 The workshop was officially organized by Daphne Bavelier, PhD; University of Rochester, Laird Malamed; USC, and Constance Steinkuehler Squire, PhD; Senior Policy Analyst, White House OSTP.  I met Constance at the first Games for Health conference many years ago and it has been great to have an advocate in the White House who understands and appreciates games. 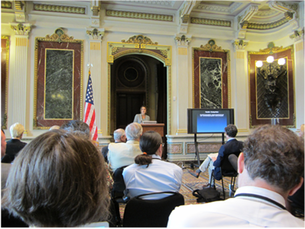 Daphne Bavelier spoke of some of her research which has shown long-lastingimprovements in the perceptual ability of game players, as well as improving their reaction time without lowering their accuracyin a variety of tasks. I was delighted to find a kindred spirit as I talked with Daphne about how game developers think about brain development, and I’ll be addressing her students in Geneva, Switzerland next month (October 2012) 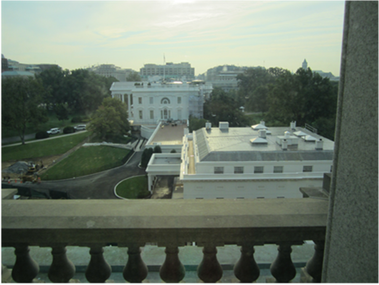 Our room looked out at the White House from just next door - that’s the main building in the center, with the West Wing so near you could practically hear the Aaron Sorkin dialog.

The attendees of the workshop were a diverse and fascinating group.  I’ve always been very interested in brain research, so it was very exhilarating for me to hear from speakers like Dr. Richard Davidsonwho has worked with the Dalai Lama and showed results of brain scans of meditating monks, and is in the process of designing and testing games that can train people in mindfulness practice.  With all the local interest in meditation and mindfulness in Northern California (and from my own wife for that matter) I loved seeing a unifying thread between that, brain research, and games.

My own presentation was given in conjunction with Paul Schrater, PhD, University of Minnesota.  Paul talked about intrinsic and extrinsic motivation, and how some mice would preferentially explore a maze instead of just going directly for food.  I discussed my own Natural Funativity concept and how that, Stealth Learning, and Flow all combine to explain why people like to play games, and how that may help us make games that are both more effective in a serious purpose, and more fun as pure entertainment.

It saw many game industry friends there - Nick Fortugno, Frank Lantz, and my old boss at Lucasfilm Games, Steve Arnold (now with Polaris Venture Partners), among others.  Mike Ambinder, a psychologist at Valve talked about how they’re using Portal 2 to enable teachers to teach physics concepts and may use Steam for assessments of learning in the future.

Dr. Adam Gazzaley whom I mentioned in my previous blog entry spoke about his research.  Adam will shortly be unveiling some promising figures showing how games may actually help mitigate against some of the effects of loss of attention in the aging brain.  I think this might be relevant to me but I can’t remember why.

A lot of government agencies were represented, including Health and Human Services, NIMH, White House Office of Science and Technology Policy, DARPA, NIH, NIA, and the NSF. 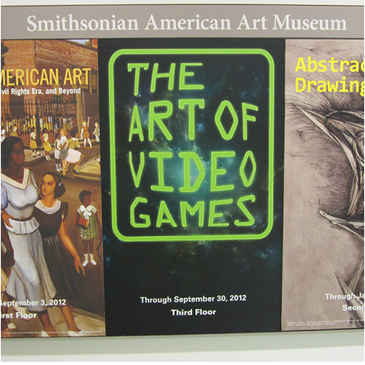 After the first day of the workshop we had a private tour of this Smithsonian American Art museum exhibit: 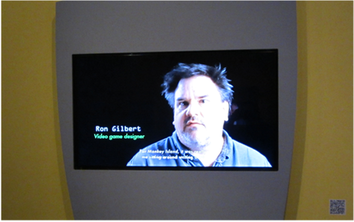 I’d been interviewed for this exhibit along with dozens of other game industry pros, it was surreal for me seeing a video compilation of excerpts since fully 80% of them were friends and acquaintances and a Smithsonian museum seemed an incongruous place to find them.  For instance when I met this guy nearly 30 years ago I knew he had potential, but he exceeded my expectations.

Actually getting to play the original Secret of Monkey Island in the next room was also a kick, I only regret that my parents didn’t live to see the day when their son’s work was exhibited there.  I’m glad the museum staff didn’t select the part with some of the cruder insults though, that might have been a bit embarrassing.  The games industry in its youth may have had a few rough edges, but it is very gratifying to see that we’re now being taken seriously both in the context of the Smithsonian and the White House.
Get daily news, dev blogs, and stories from Game Developer straight to your inbox
Subscribe