What Software is Used to Create VFX for Games?

Captivating visual experiences and high definition are increasingly sought after by players around the world. Easy access to the Internet, the advent of state-of-the-art technology, and the high performance of video game devices have led to an increase in
Starloop Studios
Blogger
June 03, 2021

Captivating visual experiences and high definition are increasingly sought after by players around the world. Easy access to the Internet, the advent of state-of-the-art technology, and the high performance of video game devices have led to an increase in

According to a research report, the global VFX Market in 2019 was approximately USD 11,500 Million. The market is expected to grow at a CAGR of 11.7% and is anticipated to reach around USD 24,949.9 Million by 2026.  Augmented Reality and Virtual Reality, which have evolved very quickly in recent years, played an important role in this global growth. The VFX industry is one of the fastest-growing segments of the international media and entertainment market.

What does VFX mean?

Special visual effects combine traditional art with digital software to create various movements in video games. VFX artists can create increasingly realistic visual effects thanks to state-of-the-art software - from almost unnoticeable VFX such as cloud movements, water, dust to powerful visual effects such as explosions or character's superpowers. Thanks to the stunning VFX, players are kept involved and interested in video games. Also, the special effects give the players a more captivating gaming experience and help them understand the game's story quickly. VFX makes the player better understand how the game tasks, facilitates the game's course without interruptions and makes the game look excellent.

How are VFXs used in video games?

Creating visual effects in video games includes several disciplines in the game development process. Sometimes, VFX artists need to know not only the artistic part but also to have programming knowledge. The two main categories of VFX that are integrated into video games are the visual effects of the environment and the game's visual effects. An example of a VFX game is the characters' powers, spells, or the spells they cast in the game. To create VFX, you need a good knowledge of game mechanics and continuous communication with the design team.

Gameplay effects are used mainly in fighting games and hack and slush games. In shooter games, VFX artists most often use environmental effects, such as rain or fog. Their role is to give naturalness to the game, reproduce the reality as faithfully as possible, and make the player feel the emotion of reality.

Another aspect to consider is that VFX happens in real-time. Because of this, VFX  artists need to invest even more effort in creating them than those who make pre-rendered effects found in movies and cinemas. In building VFX in real-time, more creativity is needed to communicate the game play through color, shape, and timing.

VFX artists use increasingly powerful software that already has preset assets such as animations, meshes, or textures to simplify their work. Due to the continuous improvement that VFX software developers bring, the challenge of VFX artists to create real-time visual effects and simulations becomes less complex.

Some of the most popular VFX implemented in video games are Morphing and Image capture (MOCAP). Morphing changes (or morphs) images into others through a perfect transition, and Image capture records the movements and transfers them to the digital environment.

In recent years, better and better software has appeared to create VFX, so there are almost no limits in making realistic games. For example, VFX artists use popular software such as Fume FX, Phoenix FD, or Maya fluids to create smoke effects. For destructions or rigid body simulations, they use Rayfire or MassFX. 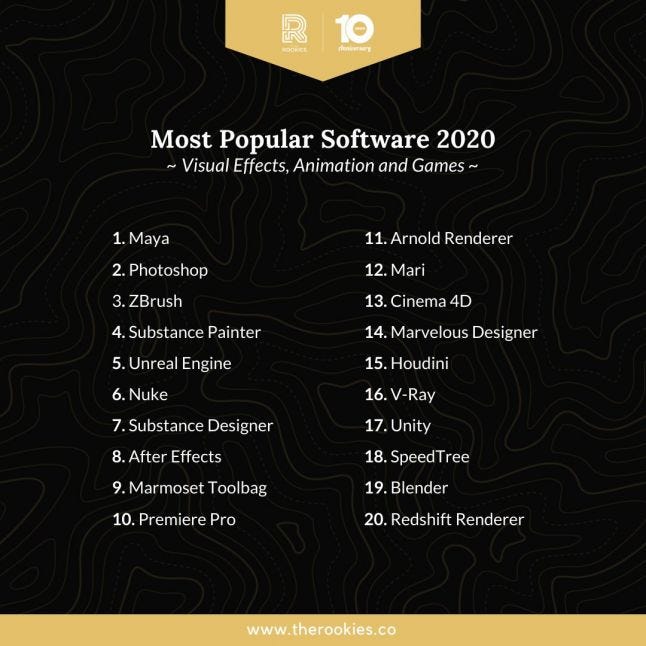 Below we have selected some of the most used programs by VFX artists in high-level studios.

Among the VFX software used by artists worldwide, 3Ds Max is one of the most popular. Also, most VFX artists at Starloop Studios use 3Ds Max to create game assets, animations, and character models. This software has gained popularity due to its simplicity, speed of work, and the great set of tools that it offers. The company that developed 3Ds Max is Autodesk, which also owns other popular software such as Maya and AutoCAD.

These two game engines are among the most used in the video game industry, in which VFX artists create visual effects using Niagara, VX-graph shader graph, shuriken, waterfalls. Being easier to use, Unity is famous for independent games, while Unreal Engine is known for high-quality visual results, being primarily used by large companies with high budgets.

Unity offers less complex assets than Unreal Engine, which provides many complex tools to put the most daring ideas into practice.

VFX artists use Photoshop in almost every one of their projects. This is one of the essential tools with which game artists create some textures from scratch, tweak some rendered images, clean plates, matte paintings, etc.

After Effects is an ideal software for the post-production stage, easy to use and with unlimited possibilities. VFX artists use After Effects to create texture and sprite sheets and to add special effects to moving graphics up to spectacular explosions. They can also create visual effects such as smoke, stars, disappearance effects, snow, and more.

VFX artists use Houdini mainly for dynamic environments and particle effects. What is unique about this software is that it makes it easy to explore iterations as artists refine their work due to the node-based procedural workflow. This advantage allows VFX artists to edit the work without too many steps. They also prefer to work with Houdini due to advanced tools that allow a dynamic simulation to achieve realistic visual effects. For more small studios or individual artists to access it, Houdini also has a low-cost version.

Thanks to cutting-edge technology and software such as EmberGen or Pop Corn, VFX artists can bring the most creative ideas to reality.

An impressive video game always has creative and captivating VFX. But to get spectacular results, you are good to collaborate with talented VFX artists with experience in the field. At Starloop Studios, our VFX artists exceed their limits for each project to reach maximum performance.