I whittle on a bit about how much I love achievements, and how Valve needs to have a think about its current system.
Mike Rose
Blogger
September 10, 2010 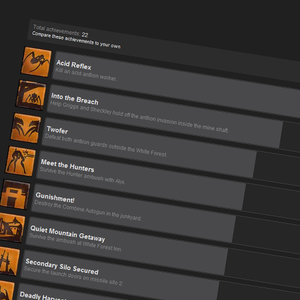 However you feel about achievements, they are by far one of the largest additions to gaming that we've seen in the last decade. Achievements extend the play time on games, and give us that warm feeling inside whenever 'ACHIEVEMENT UNLOCKED' pops up.

I'd be the first to admit that Xbox achievements and PS3 trophies are a huge deal in my everyday gaming, and have affected by play style considerably. For example, I used to play games on either Easy or Normal difficulty, since I had no reason to test myself with Hard mode. Now the majority of games offer extra achievement points for completing the game on the toughest difficulty, and I'm more than willing to go that extra mile for another 100G.

Yet while I'm madly in love with both Xbox achievement points and PSN trophies, there is one type of achievement that doesn't interest me at all - Steam achievements. Awarded during certain PC games available via Steam, they mean absolutely nothing to me, and are really quite pointless.

There's so much wrong with Steam achievements that it's hard to know where to begin. First up, the Steam community service is such a royal mess that it's hard to know where to find your unlocked achievements in the first place! There is no single place where they are collected together, and instead you need to view your games list, then scroll down until you find the specific game you want.

Once you've found the achievements you're looking for, there's no way to measure how well you're actually doing. Steam achievements have no worth, and instead your specific game will simply state that you have unlocked X number of achievements out of a total of Y. It's not at all interesting, and doesn't make me want to jump into the game and achieve the rest.

It's also an utter pain to compare your unlocked achievements to that of a friend, and even when you finally manage to do so, it doesn't exactly make great reading, as the issue of worth rears its head again - since none of the achievements have points attached to them, you're simply looking at a string of boxes and text.

This is the main problem - there is no overall score you're supplied with. While Xbox has your gamer score, and Playstation gives you a level based on your trophies, Steam doesn't bother with anything. Hence, you have nothing to show for your hard work, and no total score to feel all warm and fuzzy over.

It doesn't help that Steam achievements aren't available on the majority of games. While both Microsoft and Sony make it mandatory for developers to implement achievements and trophies in their games, Valve doesn't push this feature, meaning the majority of games don't even have anything to unlock. When only a handful of games on the service actually use the achievement system, is there really any point in it at all?

In all fairness, Steam does have one decent feature in the achievements department - the ability to check out global statistics. Checking which achievements have been unlocked by players of the game and which are rarities is enjoyable reading, and it's clever that you're also able to compare your own achievements to the global totals.

Other than this, the entire system just feels utterly hopeless and in dire need of a reboot. Steam has a huge userbase, and it's essential that it provides proper achievements that players will actually want to engage with. Achievements not only prolong the life of a game but also act as an extra selling point when a player is considering a purchase.

The following steps need to be taken. Firstly, the 'Steam Rating', which is currently based on how many hours you've played in the last two weeks (and is yet another completely pointless feature) needs to be replaced by an achievement score, based on how many achievements a player has unlocked. This way friends will be able to visit your Steam profile and see how skilled you are (or simply how many games you've got!).

As it stands, there is no real reason to care at all about Steam achievements, and in fact you'll find that certain gamers will buy a multi-format game on a console rather than PC just so they can bag the achievements available. Surely this is reason enough for Valve to make the necessary changes to their currently broken system.