The latest highlights include a raft of new games to look at, from World Of Horror through Lair Of The Clockwork God to Hunt: Showdown and beyond, as well as some great history pieces, looks at voxels and Apple Arcade, and an investigative piece on GameSt
Simon Carless
Blogger
February 23, 2020 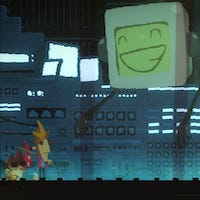 The latest highlights include a raft of new games to look at, from World Of Horror through Lair Of The Clockwork God to Hunt: Showdown and beyond, as well as some great history pieces, looks at voxels and Apple Arcade, and an investigative piece on GameStop.

Also just another shout-out - you've all spotted my other newsletter, about game discoverability/how people find & buy video games, right? Am putting out a couple of pieces a month on that too, and hoping to ramp up soon. (It's particularly helpful for devs and publishers, but others may enjoy reading it too.)

Fortnite’s wonderfully weird personality is back in latest season (Andrew Webster / The Verge - ARTICLE)
"Fortnite is weird again — and I couldn’t be happier. The game’s latest season finally launched yesterday and, on the surface at least, it seems like a standard update. It has a new secret agent theme, with opposing factions and lots of new stealth gameplay options. But look beyond the well-tailored suits and you’ll find something even more notable: Fortnite’s offbeat personality is back in full force."

38: The Rhythms and Layers of Ryan Clark (Spelunky Showlike / Libsyn - PODCAST)
"Ryan Clark of Brace Yourself Games (Crypt of the Necrodancer, Cadence of Hyrule) sashays in to chat with us about how he hit on his rhythm roguelike formula, layering in depth to make his systems sing, and how he's found - and repeated - indie game success."

Is the US market ready to embrace a $500 game console? (Kyle Orland / Ars Technica - ARTICLE)
"The prospect of a $500 PS5 got industry watchers chattering about whether such a price point could be broadly acceptable to the US console-buying market. A look back at console-pricing history suggests that, while a $500 launch would be at the high end of nominal prices, it actually sits right near the middle of the pack when inflation and median buying power are taken into account."

Tales From Discoverabilityland: February 2020 (Simon Carless / Game Discoverability Now! - NEWSLETTER)
"Hey, all! Turns out that I’m accumulating enough interesting & relevant game discoverability tidbits to do a monthly update - ‘here’s some fun stuff I found on the Internet, and my comments on them’. So this is the second one of these compendium newsletters - here’s the first one. Let’s get it started!"

Scythe’s Automa designer on making cardboard AI feel human in solo board games (Sam Desatoff / Dicebreaker - ARTICLE)
"To that end, Pedersen and his team want to make their Automas behave as human as possible, which requires identifying all mechanics in the game that allow players to interact with each other. It might mean blocking action spaces in a worker-placement game, or taking ownership of a location in an area-control game. From there, it’s a matter of designing the Automa so that it can perform these actions in a realistic way."

The Power of Dreams: Game Creation - How Does It Actually Work? (Digital Foundry / YouTube - VIDEO)
"We've already looked at the 'ready made game' created by Media Molecule for Dreams, but really, this title is all about creating your own games and experiences. Alex Battaglia and Tom Morgan sit down to the discuss their impressions of the process so far, with some technical assistance from Media Molecule itself!"

Interview: Alex aka Blackoak from Shmuplations.com (Richard Moss / Life & Times Of Video Games - PODCAST)
"I speak to the creator of Shmuplations.com, a large repository of translated interviews with Japanese game developers, about his approach to doing the translations, his insights on the Japanese games industry, and the highs and lows (and struggles) of running a time-intensive side hustle."

Snack World: The Dungeon Crawl - Gold - A Review (Chris Scullion / NintendoLife - ARTICLE)
"Despite this, it’s fair to say that even though Nintendo is handling publishing duties for the western version on Switch, it’s still sort of 'stealthed' its way to release... Make no mistake, however; if Snack World has somehow flown under your radar by this point, it’s time to plug that radar in and boot it up (or whatever it is you do to radars to see stuff on them). [SIMON'S NOTE: Worth noting that the game has a bunch of Trump memes/jokes in the localization, according to someone on my Twitter feed  - weird.]"

Why Does Celeste Make Us Feel Anxious? (Adam Millard / YouTube - VIDEO)
"Nintendo are the kings of making fun, expressive platformers - but Mario's dominance has meant that his fun-first design has overshadowed different kinds of platformers, and that's a shame! Fear, stress, anxiety, frustration - all of these things can be used as the core emotion to build a game around, and doing this can lead to some great experiences - but how? and why?"

Designing Donkey Kong Country (Mitchell F Wolfe / Superjump - ARTICLE)
"It’s incredible how much of the level was present this early in development, before it was at all playable. Mayles says “I played the post-it note plans many times in my head before building the levels in the game, so I was usually pretty confident [that the levels would work].” [SIMON'S NOTE: if you scroll down a long way in this piece, there's an interview with DKC's level designer - s'good!]"

OK DOOMER (Adam Elkus / Github - ARTICLE)
"What’s the best shooter to play in 2020? Where can gamers find the coolest weapons, the hardest enemies, and the most thrilling challenges? There’s a lot of cool games on the horizon such as Cyberpunk 2077, Doom Eternal, Halo: Infinite, and Rainbow Six Quarantine. But – don’t laugh – the best first person shooter you can play this year is already out and has been out for over 20 years. That’s right. Doom. The 1993 version."

Hunt: Showdown review – an unforgiving, nasty piece of work, where you will die bleeding in a hedge (Jim Rossignol / VG247 - ARTICLE)
"Crytek games have always been a tense mixture of technology crashed into not-quite-realised design ideas, but with Hunt it feels like design finally took the laser pointer away from the rest of the team, and the results are a thematically coherent, punishing, thrilling competitive shooter that drags in influences from across contemporary gaming. [SIMON'S NOTE: Also see comments from Eurogamer.]"

Five Months In, Here's What Developers Think of Apple Arcade (Patrick Klepek / VICE - ARTICLE)
"That same developer, who has been involved with mobile games both in and outside of Apple Arcade, was nonetheless “very happy” with how things had turned out for their game. “My biggest concern right now is discoverability moving forward,” the developer added. “Not all new games are being marketed as strongly as they could be and instead, most of the focus seems to be on the service as a whole and not on the upcoming products.""

World of Horror is a creepy, retro, and completely hypnotic horror game (Adi Robertson / The Verge - ARTICLE)
"World of Horror, a “1-bit horror game” that enters Steam Early Access tomorrow, blends nods to Ito and Lovecraft with the look of a 1980s HyperCard game. It’s set in a quiet Japanese town filled with eldritch beings, wild-eyed cultists, and impossibly twisted human forms. There is a meter labeled “DOOM” beneath your character’s portrait, advancing with every step you take."

How a new wave of developers are using voxels to create jaw-dropping worlds (Jack Yarwood / Gamasutra - ARTICLE)
"When you think of voxel games, you probably think of the waves of crafting-oriented titles that arrived in the wake of Minecraft’s success. Stark and blocky in appearance, these games aren’t necessarily intended to bowl over players with their amazing graphics, but serve instead as colorful sandboxes to dismantle and reconstruct at their whim. In recent times, however, we’ve seen a number of interesting projects that have been exploiting the potential of voxels to create lush, richly-detailed worlds to dazzle and amaze."

The story of the Atari Jaguar saviour that never came out (Benjamin Burns / Eurogamer - ARTICLE)
"The year is 1994 and it's a typically bright morning in Sunnyvale, California. Chris Hudak is riding the Caltrain to work, powerbook in his lap, dozing in and out of consciousness. Arriving into the office sometime around noon, he rocks up at his cubicle and is approached by team leader and head designer BJ West."

Lair of the Clockwork God - a review (Tom Baines / Thumbsticks - ARTICLE)
"“You clever little bastards,” I mutter to myself, for what feels like the thousandth time while playing Lair of the Clockwork God. What precedes and follows this moment of realisation is, on average, twenty minutes of feeling very stupid. As a rule, I tend not to review puzzle games to a deadline. Trying to beat a complex, single correct solution scenario with no walkthrough available is incredibly stressful. And point and click adventure games are the zenith of obscure puzzling."

GameStop employees report extreme pressure from ‘desperate’ bosses (Colin Campbell / Polygon - ARTICLE)
"All the employees we spoke to said they were concerned about the future of the company. Most reported their customer numbers had decreased noticeably in the last year. “I’ve seen a change in the sheer desperation the company has towards its profit margins,” said one store manager with multiple years’ experience at the company."

Animal Crossing: New Horizons is a much more structured take on the series (Martin Robinson / Eurogamer - ARTICLE)
"I think it was Sam Beckett - the playwright, not the body-hopping scientist - who once said you can learn just as much about a city from your first day there as you can your first three months. I'm not sure how much you can say about an all-new Animal Crossing from just an hour spent in its company - these are games for life - but between that and everything from today's Direct I can certainly try. This is a gentle upgrade for Nintendo's life-sim series, but one that brings more structure to your life while streamlining many other elements. [SIMON'S NOTE: more impressions from The Verge.]"