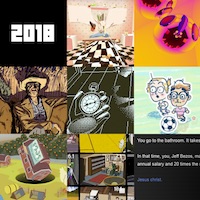 This week's highlights include another gigantic chunk of 'end of year' charts, discourses, thoughts and ruminations.

And while we're at it - I'm not really big on editorializing in this newsletter, but just wanted to say: please take some time for you and your loved ones at year's end, before 2019 gets incredibly busy & clouds your vision.

Molleindustria's highlights from 2018 (Paolo Pedercini / Molleindustria - ARTICLE)
"These indiepocalyptic times are giving us an embarrassment of releases but the most popular development strategy seems to be: work within established genres, put a lot of effort into visual polish (probably a result of increasing visual social media), and often just… make games punishingly hard (which I guess yields more play hours in face of limited resources?). [SIMON'S NOTE: Continuing his provocateur shenanigans, but Paolo's yearly picks are nonetheless reliably some of the most interesting.]"

Athletes Don’t Own Their Tattoos. That’s a Problem for Video Game Developers.(Jason M Bailey / New York Times - ARTICLE)
"When LeBron James bounds down a basketball court, he is both a transcendent athlete and a prominent palette for dozens of tattoos. His mother’s name, Gloria, rests on a crown on his right shoulder and his forearms bear a portrait of his son LeBron Jr. and 330, an area code for his hometown, Akron, Ohio. Although those tattoos have personal connections, they may not truly be his."

Greg Kasavin's Top 10 Games of 2018 (Greg Kasavin / Giant Bomb - ARTICLE)
"I made time for plenty of other games, which as always kept me entertained, grounded, and inspired in 2018, through all its ups and downs. There’s a lot of stuff I’m only just getting to, so I’m going to divide my list into two halves--games I played too little or not enough, and games I sank my teeth into enough to put them in a real Top 10. [SIMON'S NOTE: absolutely just the tip of the iceberg on Giant Bomb - please read all of the staff & guest Top 10s if you have a few, uh, hours - including folks like Subset Games, the ever-entertaining Jeff Gerstmann, and Night In The Woods' Scott Benson.]

[Interview] Eric Chung (exA-Arcadia CEO): 'We aim to be the next NEOGEO' (Staff / Shmup 'Em All - ARTICLE)
"After Spain and numerous public appearances in Japan, exA-Arcadia visited France during Stunfest 2018. Shmup’Em-All took this opportunity to interview the president of this new company, Eric Chung, in order to learn more about this ambitious new arcade hardware. [SIMON'S NOTE: this is a very interesting new cartridge-based arcade game effort - pity it'll be so expensive for home collectors, but it's a super neat idea.]"

Netflix Takes Interactive Storytelling to the Next Level With ‘Black Mirror: Bandersnatch’ (Janko Roettgers / Variety - ARTICLE)
"Back in early 2017, Netflix approached “Black Mirror” creators Charlie Brooker and Annabel Jones with an unusual idea. The streaming service had been experimenting with interactive kids content, giving young viewers the ability to choose their own path through a story with a series multiple-choice questions that could be easily answered with the help of a TV remote. [SIMON'S NOTE: This Wired piece has more detail behind the scenes, too.]"

The history of the strategy game (Fraser Brown / PC Gamer - ARTICLE)
"The history of computer strategy games begins on tables and boards, crammed inside cupboards alongside that knackered old box of Risk that every home seems to possess. The moment strategy made the leap to consoles and computers, it was already familiar."

The Year In Relaxing and Stressful Games (Paul Tamayo & Gita Jackson - ARTICLE/VIDEO)
"With the year winding down, I thought it’d be great to look at three games you can chill with as the impending apocalypse—I mean New Year’s—rolls in. Or, if you’d like to prepare for the end times with some hectic games that get your heart rate up, Gita was nice enough to give me her favorite stressful games of the year. [SIMON'S NOTE: rest of Kotaku's Year In Review is here, including 'different' stuff like 'This Year In Video Game Sex'.]

Esports players are burning out in their 20s (Aisha Hassan / Quartz - ARTICLE)
"Some of the world’s top esports players work as many as 80 hours a week, with much of the time spent on marathon video-game sessions that end up taking physical and mental tolls. According to a new documentary by CBSN Originals, this practice, known as “the grind,” is causing many professional gamers to retire by their mid-20s."

Gamasutra's Best of 2018: The top 10 game developers of the year (Staff / Gamasutra - ARTICLE)
"The way game developers are telling stories, serving their audiences, and helping their employees stay happy, healthy, and creative are evolving year by year. Looking back and seeing all the good stuff game devs have done this year reminds us how games are small miracles, and the people making them are some of the most gifted people around. [SIMON'S NOTE: also see a Top 10 Games Of The Year list, naturally.]"

How the Artificial-Intelligence Program AlphaZero Mastered Its Games (James Somers / New Yorker - ARTICLE)
"AlphaGo was a triumph for its creators, but still unsatisfying, because it depended so much on human Go expertise. The A.I. learned which moves it should make, in part, by trying to mimic world-class players. It also used a set of hand-coded heuristics to avoid the worst blunders when looking ahead in games. To the researchers building AlphaGo, this knowledge felt like a crutch. They set out to build a new version of the A.I. that learned on its own, as a “tabula rasa.”"

The gift of gaming: the joys of getting a console for Christmas (Keith Stuart / The Guardian - ARTICLE)
"We all remember that one Christmas present we got as a kid. The one we’d begged our parents for all year, the one we’d looked up 100 times in the Argos catalogue or on Amazon, depending on our age... For many of us, that present was a games machine."

The Animation of Gris (Dan Root / YouTube - VIDEO)
"Happy Grismas! There's something magical about the animation of Gris, and I'm here to give you my thoughts on how it does it."

Why 2019 could be the year video game unions go big (Charlie Hall / Polygon - ARTICLE)
"When members get together, Kinema said, it’s not just idle talk. Efforts are ongoing inside at least 12 existing studios to form bargaining units and demand the right to negotiate the terms of employment and compensation as a collective. She said that the size of the studios involved run the gamut from several dozen employees all the way up to shops with thousands of workers."

Weather Systems Took on a New Meaning in 2018 (Rob Zacny / Waypoint - ARTICLE)
"Video games love to stun you with the gorgeous vista, the unexpected majesty (or tragicomedy) of a rare animal in the wild. But these depictions started having an unshakably melancholic resonance this year. How much of what the last two Assassin’s Creed games portrayed is in danger of disappearing during our lifetimes? [SIMON'S NOTE: here's the 'games of 2018' article tag on Waypoint - go wade in!"]

The best VR games of 2018 (Samuel Horti / PC Gamer - ARTICLE)
"This year has been a relatively quiet one for VR, but headset owners have still been treated to their fair share of great games. The likes of Beat Saber, In Death and Moss have become must-plays for anyone with an Oculus Rift or HTC Vive, while we've also seen plenty of excellent VR ports of existing games, such as Skyrim VR." [SIMON'S NOTE: plenty of other good end of year charts on PC Gamer, including top games 'you might have missed' & a big 'best-of' by genre & editor.]

Recovering Nintendo’s Lost SimCity for the NES (Frank Cifaldi / Video Game History Foundation - ARTICLE)
"A lot of you are probably aware of Nintendo’s remarkable rendition of SimCity for the Super Nintendo Entertainment System. The cartridge launched alongside the system here in the United States, and brought the popular PC game to a brand new console audience. But did you know that Nintendo’s version of SimCity actually started life on the original 8-bit Nintendo Entertainment System?"

Alex Wiltshire's 5 best games of 2018 (Alex Wiltshire / RockPaperShotgun - ARTICLE)
"Now I look back, I realise that I’ve particularly enjoyed a series of games which gave me space to explore them on my own terms. Whether on the scale of giant monsters or the confined scale of the decks of a ship, they’ve all felt expansive and generous, and respectful of me as a player. [SIMON'S NOTE: yep, lots more best-ofs from RPS are here.]"

The Weirdest Video Games Of 2018 (David Wildgoose / Junkee - ARTICLE)
"Fortunately, there’s a whole world of games outside the so-called triple-A space. It’s a world that celebrates the lo-fi, embraces diversity, explores the obscure and champions originality. These are the bravest, strangest, most unconventional and experimental–and, yeah, just plain weirdest–video games of the last twelve months."