SEARCH
A minimum of 3 characters are required to be typed in the search bar in order to perform a search.
DISCIPLINES
4 min read
Featured Blog

VGVN Touts 500k Members: Does It Really Mean Anything?

The Video Game Voters Network is claiming 500,000 members? But do those members really matter when their interests clash with the ESA, the parent organization of the VGVN? No they don't.
E. Zachary Knight
Blogger
April 05, 2013

Over the last few weeks, the Video Game Voters Network, the astroturf group set up by its parent the Entertainment Software Association, has been touting that it has over 500,000 members. While this number may sound really impressive on the surface, it doesn’t really hold up to reality. Take this graphic it just posted to Twitter: 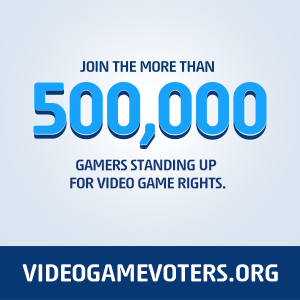 500,000 members is a lot but are there really that many? Are they really active and engaged in the work of the VGVN? To answer this, let’s first take a look at what it takes to become a member of the VGVN. Here is its sign up form:

If you don’t notice something wrong up front, let me explain. To become a member of the VGVN all one has to do is fill in an email and a zip and you are done. No further steps, nothing. Pretty simple. With such a simple method to become a member, then what is to stop a lot of people from joining. There is no risk, no effort. With such a simple form, how do they prevent people from signing up multiple times? With this form, I could sign up with all 8 of my current email addresses (yes I have 8, probably more) and I would count as 8 members. So how do they account for that possibility?

If the process of signing up is so simple, what incentive is there to drop out of the organization? Is there even a way to do that? Does the VGVN have any way to measure engagement in the organization outside of those who simply sign up? Not as far as I can tell. With no meaningful method of establishing activity in the organization, what is the point of touting this number? It would seem that this is merely a smokescreen to make it sound like this organization is worthwhile and effective, when it may very well not be.

But aside from the questionable nature of the membership numbers, the primary concern we should be considering here is how much weight these “500,000 gamers” have in the overall direction of the organization. As I mentioned in the opening, the VGVN is owned by the ESA, the largest lobbying organization for game publishers. What happens when the interests of the gamers represented by the VGVN clash with the interests of the publishers represented by the ESA? Look no further than last year’s Stop Online Piracy Act debate.

For many months, the ESA openly claimed support of SOPA. They claimed it was necessary to protect their members’ interests and profits from online piracy. However, many consumer groups opposed the legislation as it would have had severe unintended consequences for free speech online. Many consumer organizations were in opposition of SOPA except the VGVN. Throughout the whole debate and the site blackouts all over the internet, the VGVN never once spoke up in support of its members. It never once said a single thing in regards to SOPA. Despite many attempts to contact someone at the VGVN, I never once heard back from them. This event showed that those 500,000 members it claims to represent don’t matter when the interests of its publisher controlled master clash.

So what should you do if you are a “member” of the VGVN? That’s up to you ultimately. However, my suggestion is to unsubscribe. I have no idea if that will delete you completely and you will no longer be counted when it touts its numbers, but at least it sends some kind of message. My other suggestion is to join a gamer organization that actually cares about you. One that is independent of any corporate masters. A group like the Entertainment Consumers Association. (disclaimer, I am a member and work with them over at Game Politics as well as other aspects) This group has done wonders over the years to protect the rights and interests of gamers. Yes it costs money to be a member and to stay a member, but the benefits you get in return far outweigh the costs.

Don’t be fooled by big numbers like those touted by the VGVN. Those are mere distractions from what really matters, its record. What does it really stand for and who is it really speaking up for. That is what matters in the end. If it is not 100% on your side, then you should not be on its side.