Ubisoft's Assassin's Creed Lineage short film isn't an expensive advertisement for the game, nor is it a glorified cut scene introduction to Assassin's Creed 2. It's more than that - a powerful affirmation of Ubisoft's vision of convergence.
Justin Kranzl
Blogger
November 17, 2009

When Ubisoft started framing its strategic direction around the notion of 'convergence' between games and film, I was torn between scepticism and "well duh"-ism. In a world where the bottom line seems the consuming focus for many large publishers - which in turn means wringing every last cent from their properties - it all seemed alternately obvious and, well, ethereal. Especially when executives at EA and Activision have been busy axing studios and lowering headcount.

After attending a Los Angeles screening of the three short films that comprise Assassin's Creed Lineage held last week, my assumptions about how serious Ubi are about convergence were dealt a pretty harsh correction. I'd not seen the first part (released via YouTube) so it was an eye opening experience seeing the company's vision actually bear fruit.

For the uninitiated, Lineage is a trilogy of short films which set the scene for the Assassin's Creed II game. The performances of live actors filmed on green screen sets are then painstakingly transposed into a digitally generated historic Florence. The effect is stunning, and unless you're an expert in the realm of CG, you'd be hard pressed to find evidence the sets aren't real. 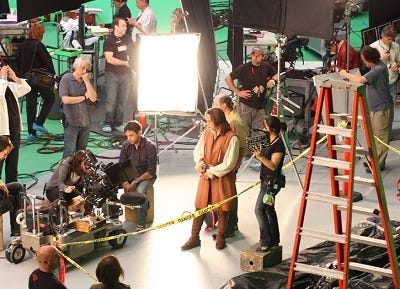 Pay no attention to the crew, this is 15th century Florence

I'm not privy to the budget Ubi threw at it the project, but it would be very easy to focus praise on the quality of the digital production. But as impressive as it was to see the Assassin's Creed 2 world come to life in cinematic format, what really left a mark was the philosophy behind its production (not to mention the chutzpah of doing it in the middle of an economic downturn.)

Even though optioning out game licenses to filmmakers has become a nice side-earner for some publishers, the uneasy distance between cinema and interactive forms still remains. In addition to the differing demands of film and game development, you also need to contend with the notion of primacy of the author platform. Whatever a given property comes out on first forms the canon, with subsequent platform iterations usually dismissed as secondary, revenue-focused streams with little authority over the parent.

Not so with Assassin's Creed Lineage and Assassin's Creed II. The two have been built from the ground up with the intention of meshing with each other. While talking up the level of communication between film and game projects is a trusty tactic for convincing consumers how close to the original property a derivative may be, here it's been taken to a whole new level. The film team worked in parallel with the interactive team. Camera angles you see in the short film will be able to be replicated in-game - even if the actors are different.

A telling quote came from AC and ACII writer Corey May, who told attendees at the Lineage screening Ubi's aim was not to exploit the property, but extend it. It sounds glib, but Lineage provides a strong suggestion of truth in his words. The short film is a profoundly important work for the games industry not because of quality perceptions but because it gives concrete proof of the much touted evolution of our gaming brands into entertainment ones.

What Ubi has done with Lineage is blur the lines between author platform and spinoff. Lineage sets the scene, and then Assassin's Creed II gives you control. As a testament to Ubisoft's resolve to become a 360 degree entertainment provider, it's a pretty good notch on the belt. It doesn't just conform to the game world - it provides context to the deeds you will perform in the game.

The more hard-nosed might be tempted to dismiss Lineage. After all - it doesn't directly make money. The day after the screening in LA, Spike TV aired the whole thing. You can watch the trilogy online and part one of it is even given away on the PS3 (Blu Ray) version of the game. As an advertisement it probably doesn't make economic sense either.

In short, if you're looking for black and white proof that Assassin's Creed Lineage will make money for Ubisoft, you're going to be out of luck. But despite expectations of the game selling in very large quantities, the potential audience for the short film dwarfs the likely sales figures for Assassin's Creed II. A whole bunch of people - non-gamers and gamers alike - are seeing the Assassin's Creed world in less time than it takes to watch an episode of Top Chef.

Some may turn it off half way through. But others will not. And those who want more will know where to go to see - or play - more of the story. If that happens, it's a pretty powerful argument for the company's convergence theme.  Ubi may not be the first to have the notion of film and gaming working in sync, but they're the ones willing to ante up, incur the risk and do the heavy lifting themselves - even sceptics like yours truly can respect that.