Top Game Apps for App Store and Google Play in 2020

We analyzed all the apps that were on the top of the charts in 2020 and found out the leading mobile games.
Kate AppFollow
Blogger
April 22, 2021

AppFollow analysts have identified game apps which enjoyed the highest average ranking positions in 2020; the research sample included apps visible in the Russian charts for most of the year (about eight months). 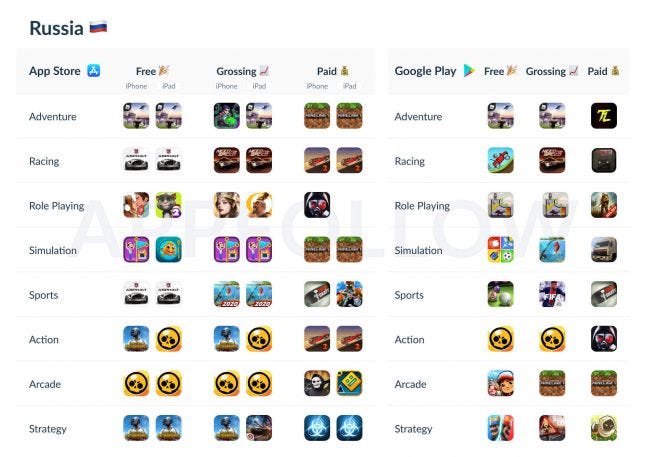 The study was conducted in several categories (Adventure, Racing, Role Playing, Simulation, Sports, Action, Arcade and Strategy) for App Store (free, grossing and paid) and Google Play.  In the Adventure category, Roblox became a clear leader. This multi-user online platform, which enables users to create their own games, achieved the winning positions among free apps in both App Store and Google Play as well as among grossing apps for iPad and in Google Play. Among the free games in the Adventure category, Minecraft led the way in AppStore, and TL Pro  in Google Play.

The Racing category also had its winners, with Gameloft’s game Asphalt 9: Legends topping the charts among free apps for iPhone and iPad, Need for Speed No Limits among grossing х for iOS and Google Play, and Earn to Die 2 by the Russian indie studio Toffee Games among paid games for iPhone and iPad.

It is worth mentioning that some of the top games in the Sports also feature in other categories; these include Asphalt 9: Legends (free / iPhone / iPad), Fishing Clash (grossing / iPhone / iPad), with True Skate (iPhone) and Real Steel (iPad) achieving premiere positions in the paid category in App Store. The leaders in this category for Google Play were Pooking - Billiards City (free), FIFA Soccer (grossing) and True Skate (paid).

Ilya Kukharev, Head of ASO AppFollow: “It is not enough for apps to attain top positions and grab user attention; it is important to continue working on the apps and analyse how they are searched for and found. For example, only 28% downloads in the Simulation category occur after branded searches (e.g. Among us, Homescapes), with the remaining 72% downloads following non-branded searches like “food game, cooking game, driving simulator". The numbers show that the proportion of non-branded searches is fairly high, offering some space for promotion with ASO. Customers look for games in this category using “general” queries; this means that user traffic can be achieved without brand promotion”.