The New Monuments of Man

How long until we see a billion dollar game? Will we ever see one? In this post I briefly discuss the possible emergence of a new category of mega-game. I then compare them to existing monuments and speculate what their impact would be on the industry.
Enrique Dryere
Blogger
October 31, 2009 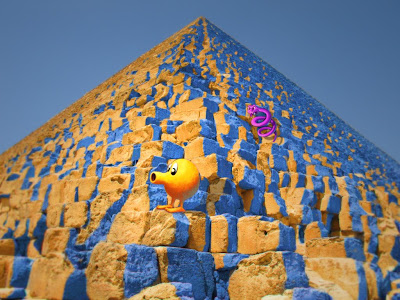 The new monuments of man will not be built of stone and steel. Their columns will be made of code, and their vast murals, nothing more than pixels on a screen.

From the pyramids of Giza to the skyscrapers of today, grandiose monuments have arisen wherever population amasses. There are more humans and more advanced technology in the world today than any point in previous history. But how will this shape the great works that will come to define our era? Will we merely improve upon what was started long ago in Babylon, or does today herald the birth of a new form of monument?

In China, megalopolises have sprung up from the earth in a handful of years. The benefits of technology will soon be placed at an unprecedented number of fingertips in every corner of the world. With metropolitan areas reaching populations in the tens of millions, one cannot help but wonder about the fantastical monuments that these cities could build.

But there is a place where population will soon be measured in billions rather than millions. It is a place that is neither here nor there, but everywhere. It is the world of cyberspace.

The impetus behind monument building has not only found its way into modern art, embodied by enormous sculptures, it has given rise to Hollywood's blockbusters and more recently to blockbuster games.

While the budgets for big films typically exceed 100 million US dollars, “blockbuster” games cost far less. Uncharted 2’s budget was a mere 20 million, while GTA IV broke records with its 100 million dollar budget. But this may all be about to change with the continued progression of one type of game in particular: the MMOG (Massively Multiplayer Online Game).

At the 2008 Goldman Sachs Technology Investment Symposium, Activison’s CEO, Bobby Kotick, said that even with a “USD 500 million or billion-dollar investment,” he didn’t think his company could produce a game to compete with their own flagship title, World of Warcraft. This may sound like a preposterous claim, but when you consider the sheer numbers behind WoW, his statement seems far less outlandish.

Although I don’t believe that a budget of that size is required to produce a game which can engage players as well as WoW, MMOs are expected to produce around 11 billion in revenues during 2009, making the potential for games of this magnitude an increasing possibility.

If Khufu had a game made, it would be an MMOG

If World of Warcraft were a pyramid, what size would it be? If we were to arbitrarily compare every 100 lines of code, out of WoW's 5.5 million, to blocks of sandstone, the pyramid they'd form would only stand 65 steps high, compared to the 201 of Khufu's. Granted that code is only one aspect of a game, but the number of the pyramid's steps are just one of its many amazing features as well. And even though this comparison doesn't consider WoW's 1.5 million art assets, its 1.3 petabytes of storage, or 11 million gamers, it's still safe to say that the industry has a long way to go before its accomplishments can rival the Great Pyramids of Giza.

What would constitute a "monumental" game?

You can certainly make the argument that certain smaller-scale works of art are monuments of their own, and that quality can make a work stand taller than quantity. Yet, in the case of most monuments, the safest bet is to build it bigger.

You may then find yourself asking, "how much bigger do the worlds of MMOGs need to get?" and, "do they even need to be bigger?" Perhaps the trick is to build them up rather than out, or taller instead of wider. Regardless of your choice in words, this implies packing more into less.

The environments in MMOs and other free-roaming games can seem quite vast. But, much like in reality, these expanses can be full of a whole lot of nothing. What if we were to take the scale and "width" of an MMO's world and fill it with the same meticulous detail applied to the level design in Uncharted 2? The resulting game would be the nearest man has come to building a fully-articulated, entirely new world -- a truly monumental endeavor. But how much would a game like this cost to make? Would Kotick's prediction suffice?

Living in the shadow of the monument

What will happen to games that are built to current scale? They will likely find themselves dwarfed, but not eclipsed. Just as smaller games coexist with larger ones today, the games of tomorrow may find themselves adjusting to the presence of this new category of mega-games.

It may also be interesting to see if there will be an increase in the inner-connectivity between games. Currently, the only thing that follows players across most games is the gamer score, which is merely a sum of trophies and accomplishments. But some developers are beginning to take a closer look at the possibility for a greater carryover from other games. Mass Effect 2, for instance, will allow players to load their saved games from its prequel, which will affect elements of the plot within the new game.

Smaller games may find themselves needing to network their efforts in order to provide the same depth of experience as their monumental counterparts, but it is more likely that consumers will merely learn to trend their expectations as they have with movies since the late 70s.

*Note: Image was composed from a picture I gathered from wikipedia of Khufu's pyramid and one of the q-Bert arcade from IGN.  This post was taken from my blog at mmotower.blogspot.com