SEARCH
A minimum of 3 characters are required to be typed in the search bar in order to perform a search.
DISCIPLINES
9 min read
article

The games that inspired me most

The 10 games that changed my view on the medium and inspired me most.
Joost van Dongen
Blogger
September 09, 2020

A few years ago I was asked by a videogame magazine what games inspired me most. I had a lot of fun compiling a short list for them. Today I've updated that list. These aren't necessarily my favourite games (although they're close): Doom II isn't on this list for example. I'm going to focus not on why I had fun with a game, but why it inspired me, how it taught me something new. They all have unique aspects that changed how I look at games and game development.

As a kid I was so much a fan of Command & Conquer that I even rebuilt some of its units with Lego. I started playing around with 3D computer graphics when I was only 13 years old and C&C was my big inspiration. I wanted to make 3D as awesome as in the cut-scenes for this game. Especially the video where a flame tank drives into a town and torches everything is still vividly in my mind. Many of the game designs that I wrote down on paper at this age were for RTS games inspired by C&C. 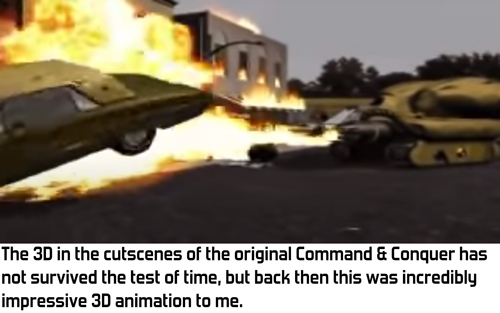 This is easily my favourite game of all time. Great music, crazy humour, fun combat and a rich universe with deep backstories and tons of personality. What is most special though is that this is one of the few games I know where information and exploration are intertwined so strongly. Everything is there at the start of the game, but the universe is way too big to find things without knowing the coordinates of interesting planets. Gathering information and even buying it is a key feature here. In combination with the lack of invisible walls this makes exploration extremely rewarding and quite different from most open world games.

An interesting aside is that in the newly released Star Control: Origins (which I really like, by the way) some players complain about the universe being so empty that grinding through planets is boring. The problem here is that modern players have been taught that it's useful to randomly wander around the world, because most open world games these days make sure there are interesting things everywhere. That's fun of course, but that means that in a game like Fallout information isn't very important: by randomly walking around you'll likely find everything (although that does cost a lot of time). Star Control's exploration is totally different because the universe is so much bigger. I think the problem in Star Control: Origins is purely expectations: it isn't clearly communicated to players that this game is different.

Another aspect of Star Control II that has greatly influenced me is the music. Each alien race you encounter has a theme song that captures the personality of that race. Music in many games (as well as movies) mostly serves to set the mood and influence the viewers emotions. But I like music that takes the foreground and really adds to the personality of the game. Inspired by the alien themes from Star Control II, I pushed for having character theme songs in our game Awesomenauts as well. This resulted in Sonic Picnic making an amazingly diverse soundtrack for Awesomenauts, adding tons of personality.

In most games the story and the gameplay are told intertwined but are not truly related. Not in Bioshock: here the gameplay and the story revolve around a common theme. Both add meaningful insights to the concepts of freedom and choice that are explored. Bioshock is not just a marvellously fun game; it also made me ponder the philosophical themes it explores. Especially the twist halfway the game felt incredibly smart and exciting. I felt like I had personally fallen victim to exactly what had happened to the character in-game. One of the few games with true philosophical depth. 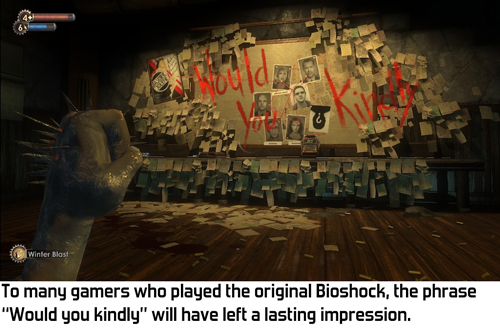 World of Goo is the ultimate example of how much creativity is needed to extend a simple and original concept to a full game. It seems to me like many of the participants of gamejams think that coming up with something original is the highest goal in game design. But much more difficult is to develop that original concept from a gimmick into a full game. World of Goo started out as a gimmicky mini-game and ended up as a glorious game. It adds enormous diversity and depth without adding a lot of features or complexity. This is true mastery of game design. 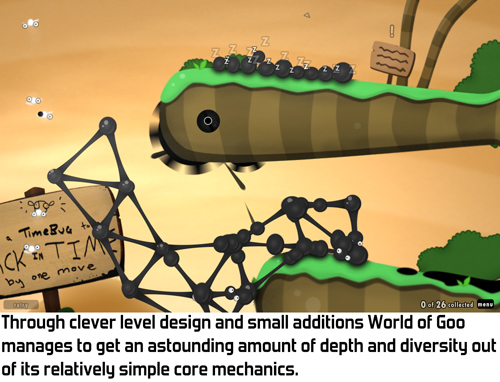 The original Deus Ex is a great game in general and the combination of RPG + FPS is pure gold for my taste in games. However, the most unique thing in this game to me is the ending. Usually when games have different endings, they are very black-and-white. There are the good ending and the evil ending. Or maybe there were extra challenges and then there are a good ending and a super good ending. Not in Deus Ex: here the three endings all have up- and downsides. It's not clear which would be the best for humanity and the options are clever enough that I spent considerable time pondering each. Deus Ex has similarly deep philosophical thoughts as Bioshock, but while Bioshock is about the game manipulating the player, Deus Ex is about the player manipulating the world. 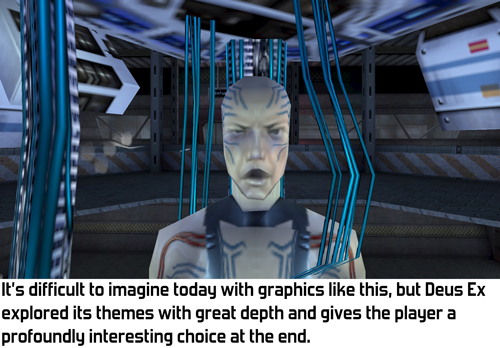 A core aspect of game design to me is that a game should be fun without the graphics and the polish. If a game is already fun with just boxes, then it will be even better when visuals and sound are added. Dear Esther is a fantastic example of a game that proves me wrong. In fact, there's hardly any gameplay. But the storytelling, the music and the visuals all add up to an incredible experience. Dear Esther is also interesting in that it suggests a lot and explains very little. I played this game with my wife and we were constantly discussing what it all meant. The game continuously pushed our thoughts into different directions with new snippets of information. I am a big fan of trains and always want to see more of them in games. I fondly remember Railroad Tycoon, Transport Tycoon and Sid Meier's Railroads. As a teen I wrote tons of pages of notes on an RTS that resolved around building railroads to transport resources. Trains could be armed to defend them and gather the resources needed to build an army. I doubt that game will ever happen, but anything with trains makes me all giddy with excitement. In fact, most of the game ideas I come up with today still have room for trains somewhere. I hope that in a few years I will finally have made at least one game that actually features trains!

I'm grouping these two games together because they have done a similar thing: they have both raised the bar for 2D art in games. 2D art is sometimes seen as lesser than 3D art, but Ori and Rayman have shown that it's possible for a 2D game to have the appeal of a big AAA production. At Ronimo we have studied the animation, special effects and level art in these two games in detail to see what techniques we could apply to our own games. 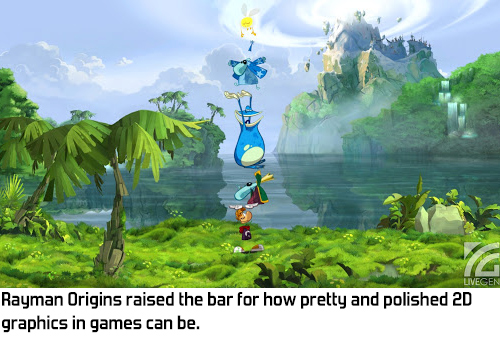 Of all the games in this list, Braid has probably influenced me most, and on several levels. For starters, Braid introduced us to the concept of self-publishing and indie development. Xbox Live Arcade had been around for a little while already but Braid, World of Goo and Castle Crashers really showed us the potential of indie and self publishing. When we started Ronimo we thought we needed to make disk based full price games. This was however not a path we were succeeding at so when we realised that we could do what these games were doing, we adjusted our plans and made a smaller game on our own instead. This became our first commercial release: Swords & Soldiers on Nintendo Wii.

Braid also influenced me on a more personal level. My interpretation of Braid's story is that it's not about an actual princess, but about the danger of looking for perfection. The main character has a girlfriend, but he breaks up with her because she isn't perfect. So he looks for the perfect woman, his 'princess'. But he doesn't find her because no one is perfect. The result is that he's alone and doesn't have his actually quite wonderful girlfriend anymore. In the epilogue the game also mentions other examples of the dangers of obsessing over perfection, like a scientist looking for the perfect science but creating the nuclear bomb as part of the Manhattan Project.

I don't know whether the story was truly meant like this, but this interpretation has greatly influenced me in my view on both creativity and life. Perfection is an impossible goal so striving for it only hampers you. Perfectionism causes you to spend too much time looking for an even better game concept to make, or endlessly iterating your game instead of releasing it and making another, or breaking up with your partner instead of making it work. Braid has truly changed my mindset in what to strive for in life and work.

So, that's it: the games that inspired me most! What games changed your view on games or the world?