The DRM Distinction of Steam's Success

This year marks the ten year anniversary of Steam and today's post looks at some of the reasons why it has become #1 for many gamers.
Josh Bycer
Blogger
May 08, 2013

The release of Sim City 5 and the subsequent server crashes preventing people from playing showed one of the major criticisms of always on DRM. Most gamers have expressed their disapproval at Origin for a while now for many reasons and Sim City 5's release was the new poster child.

During the Game-Wisdom podcast we got on the subject of EA and how much of an opposite they are from Valve with Steam. Leading to today's post as we look at what Valve has done to become king of the hill.

Let's get one important fact out of the way: Steam is a form of DRM and its basic function is the same as Origin, Uplay, Impulse and any other DRM you can think of. Back in 2003 (man has it really been that long already?) Valve wanted to figure out an easier way to protect Half Life 2 from piracy.

They came up with an idea to attach Half Life 2 CD Keys to an online account, thus always knowing who had bought a copy of the game and preventing people from just copying the data to another computer. As a side benefit, through Steam they were also able to track metrics on games from: how much time spent playing, what achievements unlocked, how long people spent at different sections etc.

The idea quickly became popular with publishers and other developers who liked the idea of having this control over game copies and signed up to be included on the store side of Steam.

However this did not sit right with a lot of gamers, who found the whole concept to be intrusive. While the sale of Half Life 2 sparked a lot of accounts to be created on Steam, most people didn't bother with the service afterwards.

For people with slow or spotty internet, the service didn't work so well. Personally, after playing Half Life 2, I didn't go back to Steam until 2007 with the release of the Orange Box.

Obviously you can see the parallels between Steam and Origin: A mandatory online service that locks your game purchases to it. However, where people have come to hate Origin, they have rallied behind Steam. Leaving us with a million dollar question that everyone wants to know: What did Steam do so incredibly right?

Valve's success story with Steam can't be attributed to just one element, but several that helped elevate Steam from just a DRM service compared to other ones:

With any kind commercial product there is a give and take from the manufacturer: they take your money and in return give you a quality product. With Steam, Valve knew that they were taking away some of the basic freedoms people had with older CD games, namely being able to play them anywhere and at anytime. And that to keep people happy and grow Steam, they had to give something back.

Over the years, Steam has gradually become more than just a digital store and DRM: unified friends list, massive sales and facebook integration are just some of the features Steam offers to people who use the service.

Valve has gotten better over time with making it as easy as possible to use the service: such as allowing preloading on major games, providing early bird discounts and preorder bonuses. They have also built up good will by providing good customer support unlike EA who it seems like every time they have a problem, they threaten people with disabling their Origin accounts.

One of the biggest criticisms that have stuck with Steam was that you always had to be online to access your games. However, they have eased off that over the years by allowing you to use Steam in offline mode. Granted you can't access multiplayer games and those that haven't been downloaded, but it still allows you to play games if your internet is out.

2. Providing Service to both sides:

Steam like any digital retailer is a middle man between the consumer and the product/manufacturer. In order for a store to stay in business it has to keep both groups happy: the consumers have to get the best deals and good service, while the manufacturer needs to make sure that their product is handled properly. 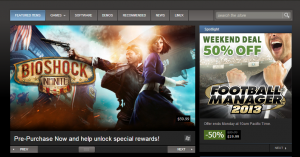 Valve has turned Steam into a win-win for both sides and has gained the trust of both the consumers and the developers.

Steam's customer support and features makes it very appealing for gamers to buy the steam version. While working with developers to get them in on special deals and the ever lucrative: "Steam holiday Sales".

Games like The Binding of Isaac, whose content may have been too much to put in a retail store, were welcomed by Steam and proudly displayed multiple times on the front page.

Steam's built in copy protection, multiplayer architecture and analytics are great for developers as they can make use of them without any additional software or fees. The best part is that the developers don't have to worry about any complaints from Steam owners, as they already have gotten used to and enjoy those features.

Simply put: Valve has done a lot more to earn gamers’ respect and trust compared to EA or Ubisoft and that has helped tremendously with Steam. Personally I think the reason is that Steam was not developed from a publisher point of view like Origin or U-Play, but from a designer. Valve knew what they wanted Steam to be and wanted to build a quality product much like a video game.

While EA and Ubisoft wanted software that allowed them to maximize profits and basically help them first and foremost.  As I talked about earlier, Valve has done a good job with balancing support between the consumer and the developer. But EA and Ubisoft, most of their decisions are meant to only benefit themselves and gamers know that.

One major example was the supposed rumor of why EA pulled their titles off of Steam, which had to do with EA wanting more control over DLC pricing which Valve wouldn't allow.

Who can forget the uproar over U-Play for kicking people out of their single player games if they lost their internet connection? And of course there is the little matter of Simcity 5 with always on DRM rumored to be shoehorned in by EA. Not to mention their recent announcement of wanting micro transactions in every game. While when Valve makes a change to Steam in some way there will be a benefit to both the consumers and the developers.

Now Valve has not been infallible over the years and has slipped up from time to time. Greenlight which sounded good on paper has ran into loads of problems with quality games still not getting on Steam, while something like The War Z having no issue.

Many people don't like how Steam has become such a golden ticket for indie developers -- as getting your game into the hands of all the Steam users has proven to have a big affect on game sales above other sources.

But with that said, comparing Valve to EA in terms of mistakes and negative opinions, it's easy to see who would come out the worst. While I agree that having one store become the monopoly is not good, it's hard to really root for the other companies after Valve has done so many things right with Steam. The only other digital retailer that I trust has been Good Old Games and between Steam and GOG, I'm pretty much set for games.

This year marks ten years that Steam has been in service and it's amazing how much the state of the game industry has changed thanks to it. With Valve still moving forward with the Steambox idea, who knows where the company will be in another ten years.