By Victoria Tran, the Communications Director at Kitfox Games, an indie studio in Montreal. Currently working on Boyfriend Dungeon, Lucifer Within Us and publishing Mondo Museum and Dwarf Fortress.

This was originally posted on their blog.

Thousands of games come out, with thousands of dollars in marketing. How are you supposed to compete with that? How do you stand out… with a marketing budget of $0?

Let’s talk a little about the strategies we use at Kitfox. For some context (and you can understand what resources we have/do not) — we’re a team of 9, released 5 games, developing 2, and publishing 2 more. It’s my full time job to do the community, PR, events, marketing, social, etc. Tanya, our captain, helps out with marketing and any key decisions. 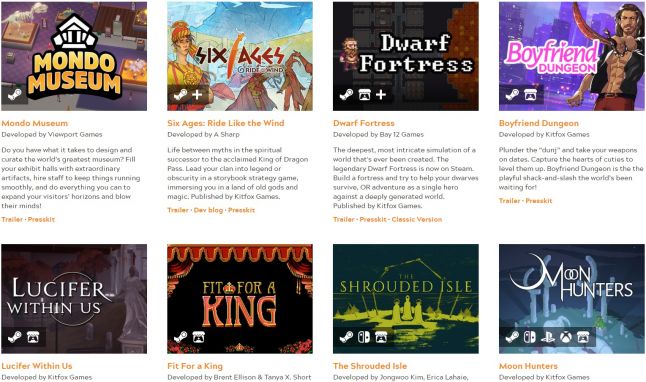 Among all these projects, one thing has remained: we haven’t paid for ads, influencer deals, most of the PR has been done solely by us, etc. It’s $0 marketing.

This was a clickbait title

So the first thing we need to talk about is the fact that there is no such thing as $0 marketing. Any time, resources, networking, or abilities spent on promoting your game counts as money being spent on marketing. I have a salary. Time spent prepping for an announcement costs money. So on and so forth!

Why do I bother pointing this out? Because failing to account for these things in your budget and time management means your plans may swing wildly out of control. But also to combat the idea that “free” marketing is somehow not worth putting a lot of consideration into!

Briefly I wanted to talk about what a lot of marketers refer to as the buyer’s journey — some of you might have heard of the marketing funnel. This is kind of an updated version. 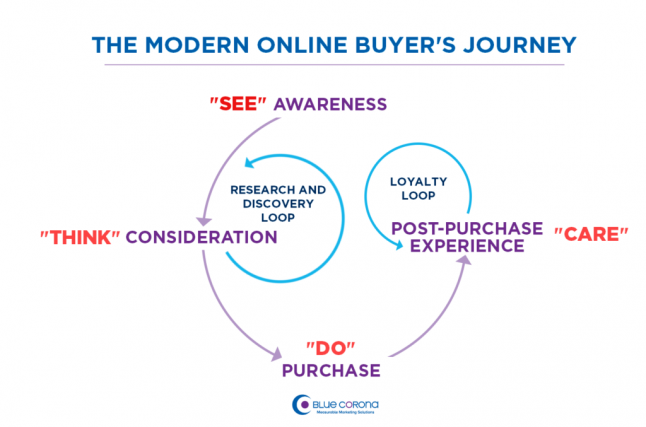 I like to take mental notes of this because if not, you might not realize all your marketing activity is skewed and mainly just focused on one phase. For example, maybe we do a lot for the awareness phase, without much put into the purchase phase. You need to balance your marketing and see where it all fits for context. Cool? Cool.

I could write a whole blog post about how important it is to know how to frame and differentiate your game among the sea of games. Oh wait, I did!

Here’s the thing though. A lot of the time when we say you should have a “unique” game, a lot of people get caught up thinking this means they need to make an Extremely New Game Idea. But that’s not what we mean. It doesn’t actually have to be ~the most unique game in the world~ . What we mean is that you need to form your marketing in a way that makes it seem unique to the player’s mind. 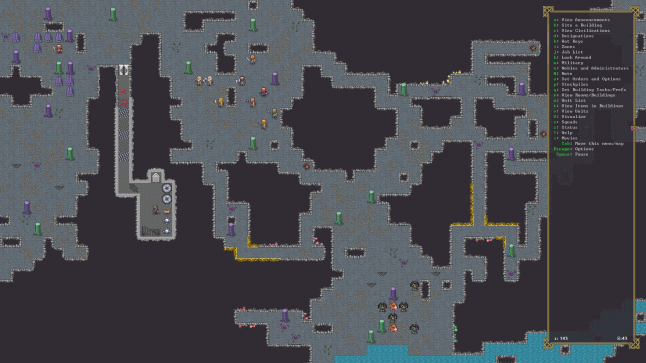 And “being better” isn’t the key point here either. Avoid just trying to compare yourself to other games in your strategies. Not a lot of people are interested in what’s better — everyone wants to know what’s new.

Now — one of the hardest hooks to nail is the “hook” of a game. This is basically the initial sentence or pitch you’ll hear about a game AKA how you’ll capture someone’s interest and hook them into learning more. I’m going to talk a bit about it here because I find that’s the one people struggle the most with.

What game is this?

The thing is, you could probably fill it in with any number of games. Boyfriend Dungeon, Hollow Knight, Dead Cells, The Messenger, etc. They’re all viable games you could use to fill in the blank.

My favorite thing to do is to remove your game name (and all proper nouns) from the description. Replace it with a game that is a competitor/similar to yours. Is it basically indistinguishable? Then you need a better hook. Looking at your competitors and seeing the hooks they used may also prove useful. Did they work? If they didn’t, why not?

If you need some help making something unique, take out everything you would usually use to describe your game and try to describe it again WITHOUT THOSE WORDS. (E.g. no using the words story-driven, puzzle, narrative, mystery, action, metroidvania). Does it still sound interesting enough to play? Is it easy enough for a non-gamer to understand? Can you embed a feeling of excitement or intrigue into the customer when they read it, even before they start playing? 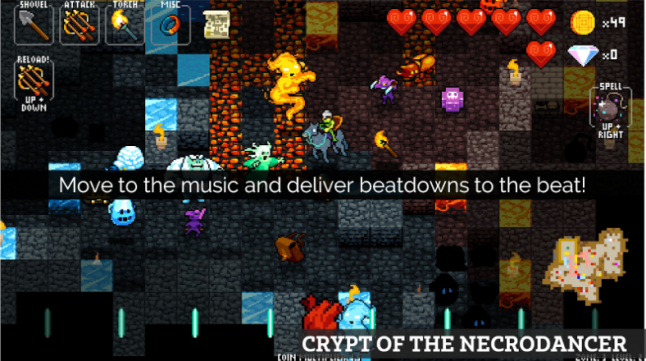 A description taken straight from Crypt of the Necrodancer. Note the simplicity.

As a marketer, you NEED to have the ability to think like how a customer would. It’s easy to get caught up in thinking everyone understands your game because we’re surrounded by game developers and like minded game enthusiasts. But not everyone is like that!

And when you’re ready to test if it’s a good hook or not? Do A/B testing on social media! Pitch your game to people at events! Tell your non-game friends or family! Is it a sentence that’s easy enough to repeat?

Note that your hook should actually refer to some core part of your game though!

Alright, so now we’re on the store page portion of your game. 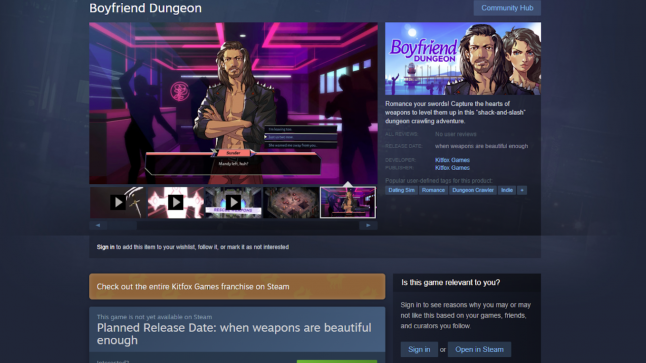 It’s always good practice to assume that people are too lazy/have no time to actually scroll through and read what’s on your page. So you want to optimize the first impression as much as possible, meaning you should put a lot of attention into:

So one of the things we have to consider is how your game looks when someone is casually scrolling by it. 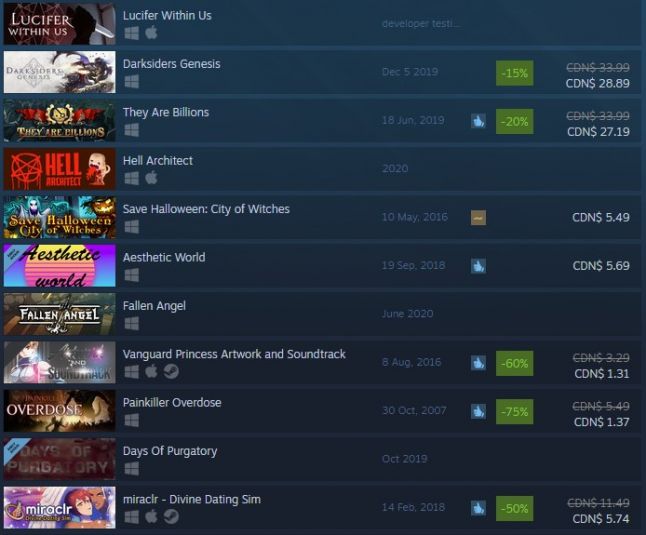 This is where your Steam capsule comes into play. Here are the different iterations of the Boyfriend Dungeon ones.

From left to right: Capsule A, Capsule B, Capsule C.

Our first one, Capsule A, is mainly “romantic”, but doesn’t really reflect much about the game other than the name. It did well in attracting attention in the beginning, but that was likely because it was new and the Boyfriend Dungeon game announcement was new.

Capsule B came after, where we tried to focus it more on “combat”. But it didn’t do so well, likely because of its dark colouring (and sort of blending in with the Steam background) and wasn’t instantaneously recognizable from a distance.

The current one, Capsule C, features people, which we thought would be more attractive (as people connect more with faces) AND it’s bright and stands out from the crowd. So far it’s done better!

Click through rates can vary quite a bit, so we often check every few weeks or so. Keep in mind lots of factors can effect your CTR — game title, news, choice of image, etc.! Keep an eye out on the Steam back end, which breaks down how you’re gaining traffic and from where. And don’t forget changing them for big updates like DLC are a valid strategy too!

What exactly is a good CTR anyway, and how do we decide when to switch it out? I asked a few local Montreal indie studios for their CTRs and compared it with ours, and it seems like 2% is the the minimum you’d want as a CTR at any point in time.

Lifetime CTR for some of our games. *Note Moon Hunters is the only game that’s out right now.

Mondo Museum’s CTR is quite high. This can be for any number of reasons, though at the time of recording it, it was quite a new announcement and lots of museum-related people were clicking on our links to see it. Additionally, not very many games have the word “museum” in them, which is probably quite intriguing.

You can see Lucifer Within Us is JUST below the threshold, which might mean its capsule isn’t attractive enough. It’ll likely be swapped out soon.

Info provided from a couple other Montreal indie studios I asked.

All I have is data from our studio and a couple from dev friends, and I haven’t seen any other stats about CTRs for other games. We’ll never know if no one talks about it though, so here’s just my side of it. I’d love to hear yours!

Okay, now that you’ve solidified your general impressions on the community at large, it still matters that you tailor your messaging depending on the group you’re appealing to. For press, I’ve boiled their goals down to three basic things. Keeping these in mind will hopefully increase the likelihood that your game will get news coverage. 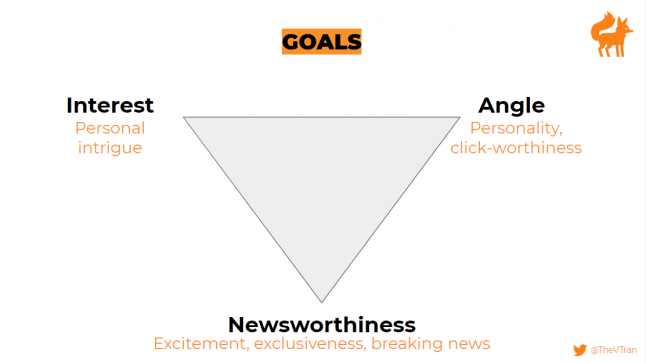 At Kitfox, we strategically make sure to never show and/or talk about certain aspects of the game until it was time to announce it to the press first. This usually means community updates are slower and I suffer trying to make content, but in the end it’s usually worth it.

There are lots of resources on how to write a good press email, but as a quick breakdown of our specific strategies, we focus on two small but important touches:

Remember what I said about keeping the goals of the person you’re contacting in mind? Yeah! Let’s talk about influencer goals! 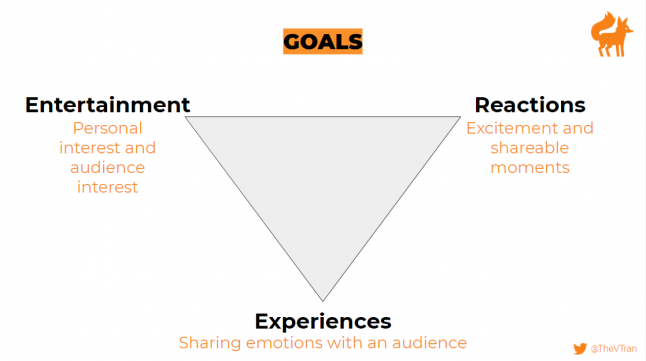 To be clear, our games thus far haven’t been very “streamable”. Being heavily narrative in nature, it was easy for them to be spoiled or just a long read. But even minor things like being able to rename villagers to chat usernames made a world of difference for The Shrouded Isle.

As I’ve said, we can’t afford sponsorship deals as an indie. While it might not seem like a lot, just the possibility of a game key is enough to build that connection with influencers.

Here are some of my general tips on working with influencers and creating good relationships with them:

Potential customers/players have their own goals too! This is the last triangle, I swear. 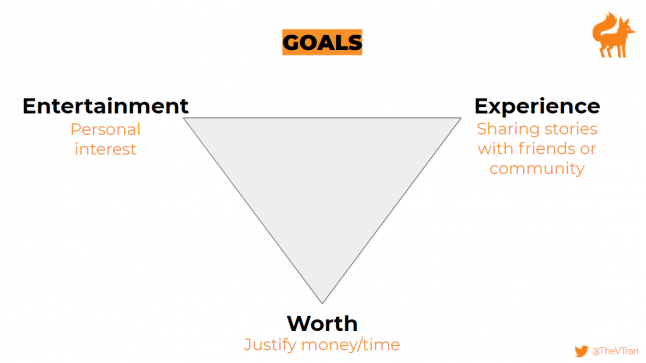 Attracting People to Your Channels

One of the first problems anyone runs into with social media is just getting people to following them in the first place. There’s no magic to it — building a genuine, engaged audience will take time. (DO NOT, I repeat, DO NOT buy followers EVER.) And it’ll be hard when you don’t even have a game announced yet!

But what are some strategies you could employ? 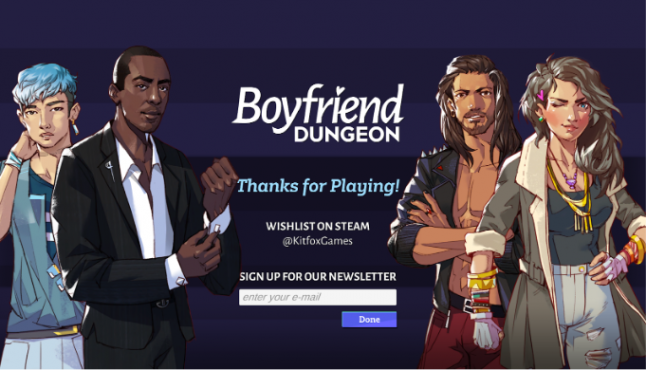 At the end of the Boyfriend Dungeon, players are prompted to sign up for our newsletter.

I need you to know though — social media isn’t everything, even if it is extremely everything. In fact, social is notorious bad at converting into clicks or sales.

According to AdWeek, 0.7% is the average conversion rate for social.

I’m telling you this because I don’t want you to COMPLETELY rely on social media. You need to balance your marketing activities. It is good for many things though — if you remember our modern buyer’s journey from the beginning of this post, social can play a role in all of those parts. Viral tweet? You just got awareness. Retweeting tons of articles with 10/10 reviews about your game? You’re getting them at the consideration phase. Doing some fast customer service via Twitter? That’ll keep them in the loyalty loop.

So now that we know that social might not be the best at conversion, what is a good conversion rate, anyway?