Study examines how the top 100 bestselling games portray drug use

Addiction awareness organization Archstone published a study examining the top 100 bestselling games per console (including Grand Theft Auto and BioShock) and analyzing each ESRB rating for substance use in order to further investigate the types of drug use present per game.

This information could prove useful for devs curious about how in-game drug use affects gameplay, and how its portrayed to the player.

The study explores how in-game drugs are referenced, and the findings include what types of substances are featured, which genres included the most games with drug references (and whether those drugs were real or fictionalized) and how they affected gameplay.

61 percent of games which featured drug use used real-world names, or fictional names for what were obvious replicas of real drugs. Around 38 percent of the games featured fictional drugs found in-game only, while fewer than 1 percent featured a mix of real and fictional substance.

The study also found that whether real or fictional, 40 percent of games featured drugs that caused the user to become disoriented in some way. Another 32 percent boost a character’s power while ingested, while 28 percent increase a character’s health.

Be sure to check out the entire study at Archstone's website. 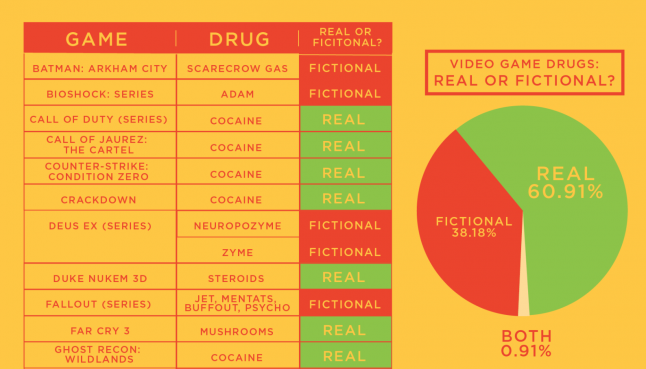