"One of our core philosophies when making games is that the interaction the player does the most has to feel as satisfying as possible."
Chris Kerr
News Editor
July 19, 2021

Gamasutra sat down with Timo Falcke of Toukana Interactive, developers of the Best Student Game-nominated title, to learn about how they worked to create a feeling of peacefulness within the game, the board game inspirations that shaped the game, and creating appeal in even the smallest interaction with the gameplay.

Who are you, and what was your role in developing Dorfromantik?

My name is Timo Falcke. I'm one of the four members of Toukana Interactive, the studio behind Dorfromantik. My primary role on our team is as the programmer, but I'm also majorly involved in Game Design and in managing our accounting on the side.

The other team members are Luca Langenberg, Sandro Heuberger, and Zwi Zausch, all of them with a primary and several secondary roles.

Together with Luca, Sandro, and Zwi, I studied for my Bachelor's degree in Game Design at HTW Berlin. We developed several games as semester projects, and Sandro and I completed one and released it commercially on Steam: the VR game ViSP - Virtual Space Port. Besides that, I took part in many Game Jams and developed smaller games for those, some alone, some in various team constellations. I also enjoy developing board games as a hobby, though I haven't pursued releasing any one of them so far.

Since 2020, all four of us are studying in the Games Master's program at HTW Berlin and will write our Master's thesis about the process of making Dorfromantik. 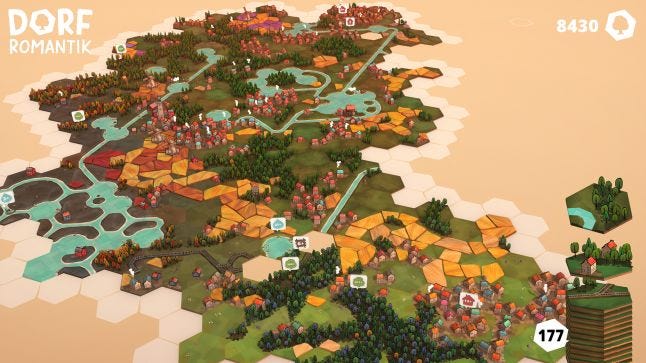 How did you come up with the concept for Dorfromantik?

In April 2020 we were in our first semester of our Master's program and also in the ideation phase for the first game we would develop as Toukana Interactive. During that time, we developed more than 10 different prototypes, and Dorfromantik was one of them.

The first Dorfromantik prototype originated in the Ludum Dare game jam at the end of April, with the theme "Keep it Alive". After brainstorming different approaches for this topic, we liked the idea of keeping a civilization alive by balancing it out with its surrounding nature. Since we wanted to find a simple, yet very scalable core mechanic, we had the idea of forming a simplified landscape by placing tiles adjacent to each other. To give this building mechanic a purpose, we introduced quests, demanding the player build certain landscape constellations.

We used the Unity game engine to develop Dorfromantik. For art asset creation, we used Blender and the Affinity suite. Also, we used many plugins from the Unity Asset store like Odin and DOTween.

What thoughts went into making a game of placing tiles to create villages and landscapes through placing tiles?

All of us enjoy board games, as well as elegantly-designed video games that manage to truly capture the essence of a certain game type. This preference played a big role in shaping Dorfromantik the way it is today.

We chose the setting of a rural village since all of us are very familiar with these kinds of landscapes, growing up in different places in the German and Swiss countryside. We felt like the calming game feel fit the associations and memories we have of those landscapes. 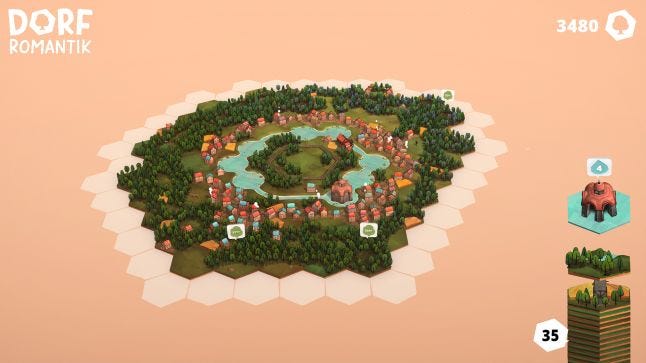 How did you design quests around the tile-placing mechanic?

After we settled on the tile-placing mechanic, we collected ideas on how to give the players a challenge and a goal to work towards by placing tiles in a certain way. In our original prototype, we already implemented the basic ideas of counting connected trees, houses, and fields. Later, we refined this idea and placed the quests on the board itself, with them acting like "demands" - the deer wants to live in a forest with at least X trees, the train wants to travel at least X train tracks, etc.

We also had some other criteria the landscape might have to fulfill in mind, but most of them weren't as intuitive and easy-to-communicate as the counting-quests.

What ideas went into creating a sense of progression, and a desire for replay, in the game?

With a simple, yet engaging core mechanic in place, we had already covered the first and most important layer of our motivation: the intrinsic motivation. Placing tiles and forming landscapes by itself was already very enjoyable. Since tiles are generated procedurally, the map also ended up looking different with every session.

By adding a high score and an increasing difficulty curve to the game, we also had one way of creating replay value through extrinsic motivation. On top of that, we designed the challenges. They behave like achievements, but are connected to unlockable biomes, tiles, and skins, giving the players additional incentives to try out different play styles. This mechanic is also very extendable, and we have many ideas for new challenges coming up in future updates.

Dorfromantik features many pleasant, tiny animations that make tile placing a joy to do. How did you design these to make tile placement feel good?

One of our core philosophies when making games is that the interaction the player does the most has to feel as satisfying as possible. Tiny animations and sound effects are great ways to give the player's actions more impact.

Since we went for an idyllic countryside as a setting, we also wanted the players to enjoy just watching their creation and discovering small details filling it with life.

For all of those additions, we always kept our core ideas in mind and took care that no sound or animation would disrupt the calming atmosphere of Dorfromantik. 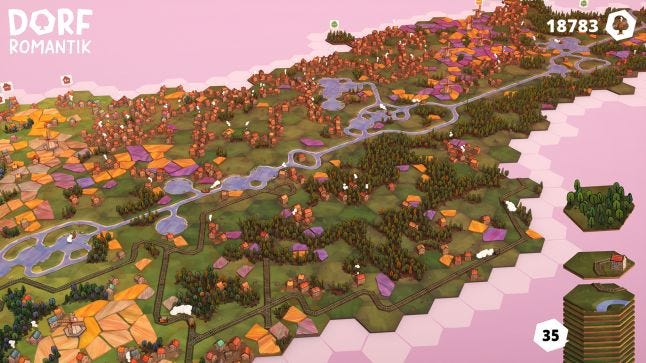 What thoughts went into the visual design of the game? In creating a sense of peace and natural beauty through the look of the game?

Luca and Zwi created mood boards for our art style, drawing inspiration from landscape paintings and photography. Many artist of the past have done a phenomenal job of capturing the beauty of the countryside and nature in their paintings, often using an idealized way of depicting them. Our intention was the same - to not create a realistic interpretation, but an ideal and harmonic interpretation of the real-world landscapes, with all of their beauty and none of their flaws.

The painted look and haptic aesthetics of Dorfromantik should also emphasize its resemblances to board games.

What thoughts went into designing the game to be relaxing? How did you shape your design to make a game that was challenging, but still calming?

With Dorfromantik, we wanted to satisfy both types of players: those seeking a challenging puzzle with lots of strategic planning needed, as well as those who enjoy simply building beautiful landscapes. Even within our team, some prefer the one and some the other way of playing.

Because of that, we added several strategic elements to the game, but designed none of them to be too punishing for someone just building for aesthetics. In the future, we will also add a creative mode to make it even easier for players to relax while crafting their ideal little worlds.