Some Thoughts About Indie Games

In this post, I tackle why indie games are just as stagnant as the triple A titles they claim to trump. Which is to say, not stagnant at all.
Raymond Ortgiesen
Blogger
July 31, 2009
In my last post I wrote that it was 1 of 2 of my commentary on genres. The first part was about "Serious Games" and can be found here. Here is part two: Indie games.

There is an "Us vs. Them" mentality inherent to a large number of indie and triple A developers. It's gotten into our heads that triple A games are corporate drivel and, to counter-act this, the bold indie developers have stepped up onto their digital distribution platforms to spread the revolution of new mechanics and deep story that those corporate meatplows won't take a chance on. Viva la revolution!


Triple A games are frequently lambasted for paper-thin stories, muddy brown/grey graphics, and no innovation in their mechanics. If you don't think there's an attitude of superiority about indie games vs. mainstream games, you need look no farther than Gamasutra's own sister site IndieGames.com. Let's take a look at those quotes:

"The indie game movement is the most important transition this industry has seen since the rise of the internet." - Andy Schatz

"For the mainstream industry, everything goes in one direction: bigger, shinier, 3D-ier. Indie games go in every direction, and it's exciting as hell. We'll keep 'em honest." - Derek Yu

"I believe - fiercely and with passion - that the independent video game scene is in the midst of a startling rise to prominence. Why? Because innovative artistic games made by small teams finally have the ability to be easily played and enjoyed by gamers. Viva la indie revolution!" - Simon Careless

These guys know all about the mushy browns and greys of modern gaming. They see through the shiny veneer of bloom and specular mapping. To illustrate the state of modern mainstream gaming, I've made the following image. 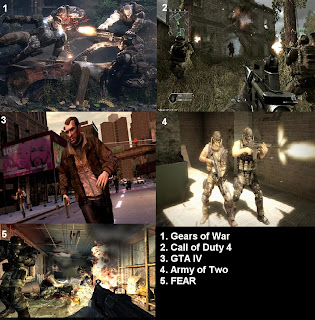 Ugh. Bloom and brown. Indie games on the other hand, are often praised for their deep stories, unique art styles, and innovative mechanics. This is what the industry should be striving for! So I've constructed another handy diagram for us, similar to the last.

Wait a second... Those all look alike too! They're cartoony, abstract, and clearly fans of bright colors. What gives? Where's the revolution? Well, maybe they might look like one another, but certainly they have the upper hand in terms of mechanics. No first person shooter clones over here.

Braid had ingeniously clever platforming, time shifting puzzles and it's hand painted art style certainly hasn't been replicated. World of Goo was a physics game that took the "simple to learn / impossible to master" mechanic to heart, with a delightful aesthetic. No game has been able to capture the same emotions that Blueberry Garden has. This is certainly the kind of stuff that the mainstream can't take a risk on.

These mechanics and aesthetics are all unique in their own right, and it would be unfair for me to lump them all together and claim that the indie games industry is stagnating. It isn't. Neither are the big games either. Just as those indie games introduce new and unique concepts, so do just as many triple A titles.

Mirror's Edge introduced the world of gamers to parkour and to a new sleek aesthetic. Portal gave us a whole new way of thinking about 3D spaces with its portals and its boldly unique narration. Left 4 Dead gave us a new way to think about multiplayer shooters; no one had seriously attempted a shooter designed from the ground up to be cooperative before. I don't even need to talk about Bioshock: we've all played it for a reason. You can't tell me that triple A games are stagnating when you look at these (and more) titles.

As a student who's worked on a number of small projects, I know that it's easier to do abstracted art styles with simple mechanics on small teams. That's what small teams are good at, so that's why a lot of indie games are that way. Indie games aren't a revolution and will not change the face of gaming. They're just a subset of the industry.

The bottom line is that we all make artistic works. Those works draw inspiration from all manner of sources; that's part of the creative process. We draw this inspiration from each other, from different mediums, and from the natural creativity of our own minds. Triple A games, Indie games, and every type in between together form the whole of our medium. Why do we bother with delusions of grandeur for our own style of design?

Indie games can be unique and mind blowing and triple A games can be stagnant, indistinguishable clones, but just as often the opposite is the case. There's no magic trick. Throwing tons of money at a game could produce something terrible, or give us the next Portal. A small indie team could push the boundaries of what we think is possible with design, or it could be boring and frustrating. When consumers or developers give into the hype surrounding indie games they're harming themselves and the industry.  Let's leave the cliques in junior high and get back to making great games.