Should Players Buy Their Own UI?

Why does Animal Crossing force players to purchase UI improvements from the in-game shop, and what's the resulting impact on the game’s UX?
Sebastian Long
Blogger
April 30, 2020

Animal Crossing: New Horizons drops players onto a near-deserted island, with empty pockets and dreams of a self-made paradise.

It’s a slightly laborious process to open the in-game inventory, move the cursor to your desired tool with the d-pad, and double-tap to ‘hold’, to then resume weed-clearing or hole-digging. And so, when the in-game shop is constructed, it’s a welcome surprise to find a purchasable ‘Tool Ring’: a radial quick-select menu for speedy access to those essential tools. 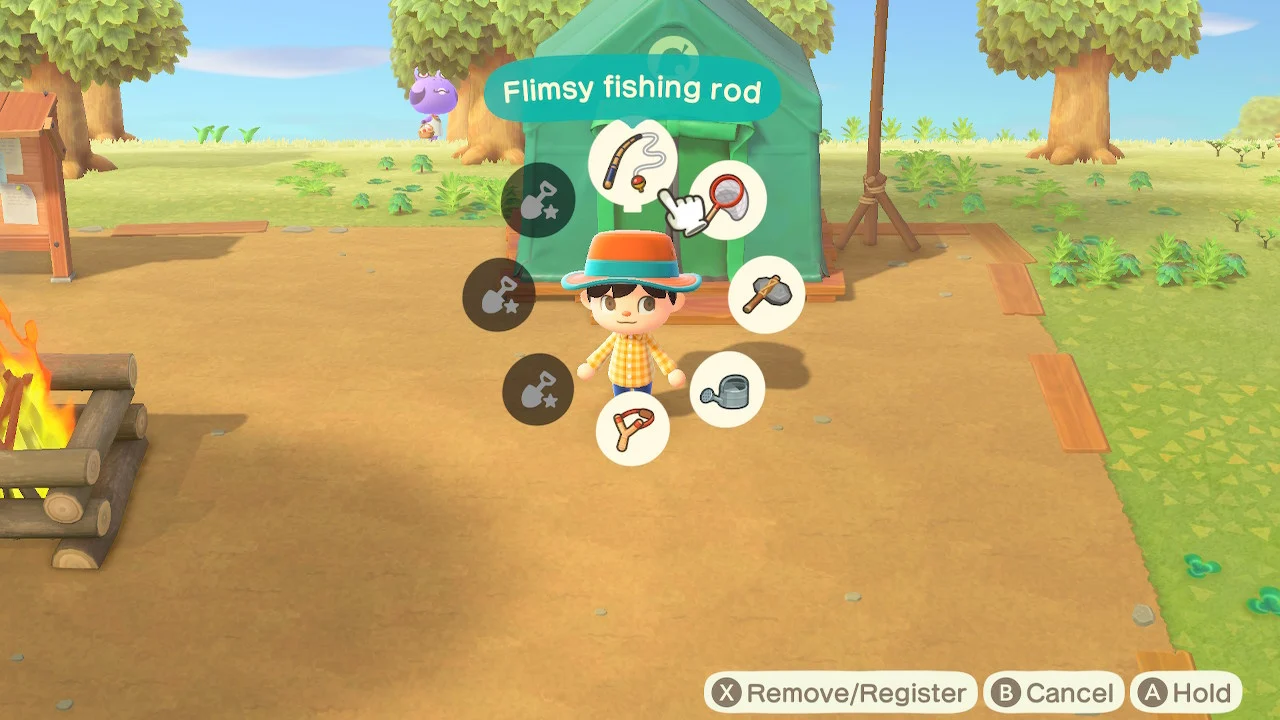 It’s a radial menu: One press shows the menu, one push of the analog stick in the direction of your desired tool, then another press to select that tool.

The Tool Ring is one of several upgrades that players can buy from infamous in-game shopkeeper Tom Nook, but so far it’s the only upgrade that’s purely for quality-of-life rather than unlocking some new mechanic or progression.

The Tool Ring’s only job is to reduce the players’ need to access and scroll through the inventory to access their tools.

But until the Tool Ring is bought and unlocked by players they must use the inventory, despite it being slower to complete tasks, more error-prone, and more visually overwhelming.

Why would designers force players to use a clunky inventory when a perfectly good shortcut exists?

And to unlock this quality-of-life feature, AC:NH asks players to save up and convolutedly buy it. Surely it could just be unlocked at the beginning?

Why wouldn’t quality-of-life capabilities unlock for players automatically? Why should players buy their own UI?

Like many seemingly counter-intuitive choices in game design, the answer is: to shape player behaviour.

Let’s discuss why player experience benefits by players buying their own quality-of-life improvements like the Tool Ring in Animal Crossing, and see if this might be a mechanic that benefits your title too.

All games struggle with teaching players, particularly those targeting audiences with little gaming experience or little time on their hands.

If games can reduce the complexity of interfaces then there’s less to teach or become overwhelmed by. As such, it’s common for games to progressively reveal UI elements piece-by-piece through the first few minutes or sessions of play. This approach leads to a more gradual ‘learning curve’.

Putting the Tool Ring in the in-game store gave players that extra learning time. But also the opportunity to pre-empt its introduction: to read the written description and understand the utility of an item to be introduced later.

Providing quick access to tools might be necessary to pacing in AC:NH, but that doesn’t mean the resulting radial menu is easy for players to understand or interact with. It’s deceptively complicated: it’s the only radial menu in the game, and is populated by tools that’re abstractly ‘favourited’ inside the inventory: one of the most visually-dense and variable menus in AC:NH. 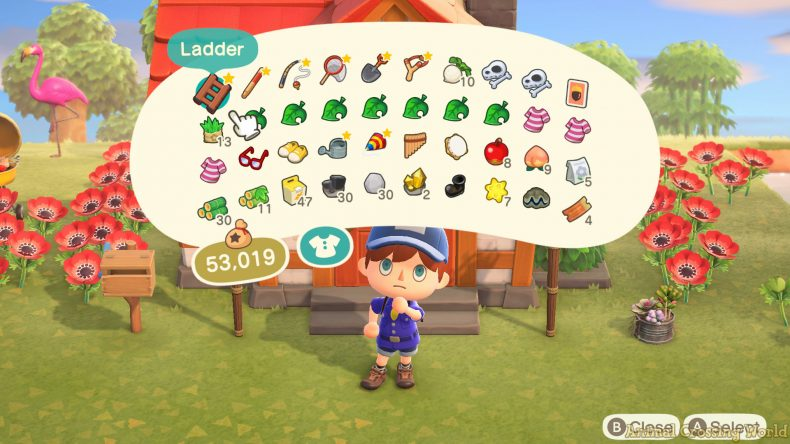 The Tool Ring avoids players having to visually scan and navigate this colourful, complex UI. Image from ACW.

Delaying the addition of complex ideas can also empower teams to introduce more complexity than might otherwise have been tolerated or appropriate for a given audience, had it been introduced all-at-once.

At The Player’s Pace

Progressively revealing new UI elements might flatten the complexity curve, but the cadence of unlocking would still be controlled by the game, not the player. Particularly in free-to-play, players’ first gameplay session risks being overwhelmingly prescripted to ramp from 0-to-fun as quickly as possible, sometimes leaving players without a clue what’s going on.

The Tool Ring’s introduction isn’t just delayed, it’s player-controlled. The need to purchase gave hours or days of space for player to grok the rest of the game first, and even then players still had to ‘opt into’ adding more complexity by actively choosing to purchase that item:

Whether players knew it or not, they were in charge of their own decision: “I’m ready for more, now”.

Of course there is a risk to forcing friction on players in the short-term, and relying on them to unlock the ‘true experience’ for themselves; we’ll discuss risks at the end of this article too.

AC:NH has multiple stores, multiple currencies, and layers of challenges and goals. The intermingling of players’ self-set goals and game-world goals (aka intrinsic and extrinsic goals) is part of AC:NH’s charm.

The Tool Ring is purchased through the notably unexciting ATM machine with ‘Nook Miles’, one of the two main currencies, tied to in-game challenges and achievements. Unlocking the Tool Ring from the Nook Miles ATM machine. Image from NintendoLife.

Any economy-bound game knows the value of encouraging players to make regular, rewarding transactions. For AC:NH in particular, having a desirable item tied to the secondary currency in the early-game ensures that the challenges for Nook Miles aren’t totally ignored.

And when players do prioritise these optional in-game challenges, they’re rewarded with something of tangible and immediate value that helps with both their self-set and game-set goals.

The Tool Ring is a shortcut. It’s a miniature, less-capable but quicker-to-access version of the inventory.

But the inventory still has a huge amount to do in AC:NH, and players will likely have more tools than can fit in the Tool Ring. This shortcut is an addendum, not a replacement.

Had the Tool Ring been unlocked from the beginning, players would have engaged far less with the inventory; in contrast to the Tool Ring it’s cumbersome and slow. Could lessened use of the inventory have damaged the player experience, or player’s understanding of the game? Without playtesting both versions it’s hard to say for certain, but I’d posit that by the inventory’s nature of constantly-changing, present-containing, item-description-giving, reminders-of-collected-items—that regularly visiting the inventory has value to the player experience. AC:NH inventories are filled with excitement and knowledge. Image from Animal Crossing World.

And so forcing players to take the ‘long-way round’ for a while leads to better understanding of the world, and the specific value that the inventory has, which lasts even when a shortcut to some actions is unlocked.

We’ve already touched on some risks that this approach presents. Clearly putting all quality-of-life upgrades behind a shop purchase isn’t wise, so what’re our options and risks here?

Depending on the prominence of the in-game store, or the number of items available to buy, players simply might never acknowledge the item exists. The newest Pokémon Sword and Shield chose to have the game volume controls unlockable via an in-game item, the “High-tech Earbuds”â€Š—â€Ša design judgement perhaps motivated by the reasons outlined in this article. But the choice to unlock them through talking to a specific NPC meant their unlock was easily missed by players. Pokémon Trainers had to visit a particular NPC to unlock in-game volume options. Image from NintendoLife.

Holding back the quality-of-life improvements, be they game volume controls or avoiding extra button-presses, disproportionately affects players with impairments, in these cases withholding tools to accommodate auditory and motor challenges. There is clearly a balance to strike here.

By making it an optional purchase, there’s a clear risk that players don’t recognise that the unlockable will improve their experience, and therefore never invest in it. In AC:NH the Tool Ring is listed in the in-game shop as “Tool Ring - It’s Essential!”; this on-the-nose description hints at difficulties in getting playtesters to pick it out from among the other items for sale, or not prioritising it. And so depending on how ‘essential’ your upgrades really are, or how well you’re able to describe them, there’s some risk that the purchased capability is less useful than your promise, or useful but ignored.

Despite the Tool Ring shortcut, there’s still a lot of UI busywork in AC:NH.

Much of Animal Crossing’s satisfyingly glacial progression and deliberate friction manifests in menus. These good design decisions haven’t gone unpunished by players, and there are a few key interactions that are chief among players’ gripes. For example, the inability to craft consumable items like fishing bait without crafting them one-by-one, or the need to have crafting ingredients in the player inventory, despite the presence of bulk ingredient storage in players’ homes.

But if player feedback is heeded, and Nintendo decide to reduce this friction, then perhaps it’ll be Tom Nook that offers players their requested UI shortcuts. For a fee, of course.