Heat Signature is a game of boarding randomly-generated starships and trying to take them over, dealing with everything that can (and will) go wrong along the way.
Kris Graft
Publisher
February 06, 2018

Randomly-generated starships await to be raided in Suspicious Developments' Heat Signature, a game of dealing with all of the things that can go wrong while doing so. Security guards, futuristic gadgets, and ships blown to pieces can all make for challenging situations to deal with, and the player just has to make do with the hand they're dealt.

Gamasutra spoke with Tom Francis of Suspicious Developments to learn about the nuances of creating stressful situations that can pop up for players to deal with, and how having consistent logic helped create some neat potential solutions in the Seamus McNally Grand Prize-nominated title.

I used to be a games critic for PC Gamer for 9 years. For the last 3 of those, I started tinkering with Game Maker in my spare time, and made Gunpoint with artist John Roberts, composer Ryan Ike, and 3 others. That sold well enough for me to make indie games full time, and Heat Signature is the first big game I've designed since then. 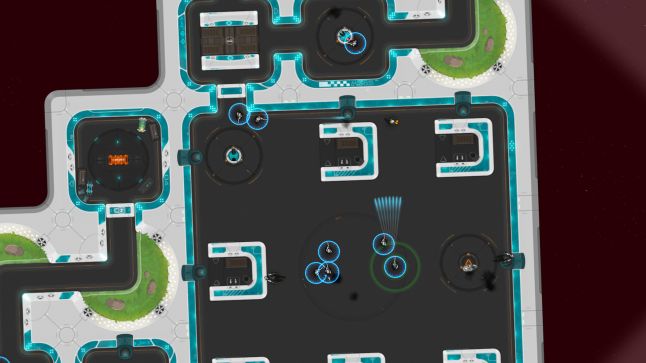 It started with an interview like this, with me on the other side - I was asking Spelunky creator Derek Yu if he thought his chunky level generation could be adapted to 3D. Afterwards, I thought about how I'd approach that, and thought of spaceships as a good type of level where you could destroy any part of it and it'd make sense that there's nothing outside. It was just a pipe dream, I wasn't even a developer at the time, but after Gunpoint I realized I knew enough to make a game like that in 2D. So it sort of came full circle.

We used Game Maker Studio 1.4. It's still the fastest tool I know to get something up and working, and I was surprised it let us do things like the seamless galactic zoom without too much hassle.

I started it alone in December 2013. Around August 2014, I had enough of the game working that I put out a call for artists and composers, and not coincidentally John Roberts was the best choice for art again. For music I hired John Halpart for the main score, and Christopher James Harvey for a few extra tracks.

At the start of 2017 it had been 3 years, and I was itching to finish, so I hired John Winder to help me with the programming side of things. Valve had invited me to co-work from their offices, and John's technical skills plus our chats with Valve led to features like finding your Steam Friends' items in-game. 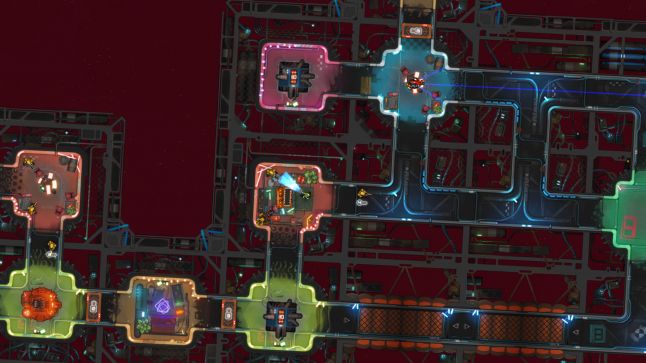 Heat Signature requires players solve multiple problems on the fly as they board starships. How did you create this style of game where all manner of things can and will go wrong? What thoughts went into creating multiple ways for trouble to arise?

I think most of it comes from creating rules of the simulation, rather than special cases with a particular intent. So, when you fire a gun, we have that create a noise in a certain radius, and guards investigate suspicious noises. I didn't add that to create a specific scenario, or even to make the game harder or easier. It's just a rule that makes sense, is easy to learn, and applies in all situations.

That means it can be a tool: fire to trick a guard into opening a door when he comes to investigate. Or a problem: you can dodge this guard's bullet, but the noise of him firing is going to attract everyone else. Same goes for other rules, like 'a heavy, fast moving object hitting someone will knock them out'. You can throw a concussion hammer at a guard across the room, but equally a grenade that takes out an engineer can send his wrench flying at you hard enough to knock you out cold.

I usually find if you make a consistent logical simulation, players create their own catastrophes.

How did you create tools that give players many options for different styles of infiltration. How did you accommodate various kinds of galactic break-ins?

The hard work is in building the simulation, and the payoff is that it's then really easy to invent and add cool items. For two and a half years I was mostly just doing the first part, lots of simulation work with only a few boring items like guns. Then, in the last year, I was able to add a flurry of fun gadgets almost as fast as I thought of them.

So the Slipstream, a device that slows time and lets you move 5x faster than everyone else, only took a couple of hours to add. We already had variable time-scale, the physics of bullets and movement were already timescale-dependent, so it's just a few lines of code to change that number, and make an exception for the player.

Now you can outrun a bullet, and all these other unforeseen consequences happen for free - for example, you can just run through glass. A ship's window is just checking "OK, we just got hit by heavy object travelling at 20 metres per second, time to break." So that trick just works because the physics of it adds up. I didn't even know you could do it until after launch.

What drew you to add a pause feature to let players think things out? Why not just force them to adapt as things go wrong in real time?

That was a very happy accident. I do generally want to avoid making my games too skill-based, not least because I'm bad at skill-based games myself, but I hadn't really managed that in Heat Signature until I came to add an inventory screen.

This was just to help you change weapons without fumbling for the right key in a tricky situation, and initially it blacked out the whole screen while you picked a weapon. Then I tried only dimming the game world behind the menu, then I tried not dimming it at all, then I tried moving the inventory list out of the way to the side, then I tried letting you aim shots directly from this screen, and suddenly I had more of a strategy game than an action game.

I discovered this is a huge win for an open-ended, emergent type game. These games, Heat Signature included, generally allow for loads more interesting solutions than the player has time to consider in the time window when they'd work. A pause-and-play system completely removes that limit, and suddenly the frequency of those story-worthy "Aha!" moments exploded. 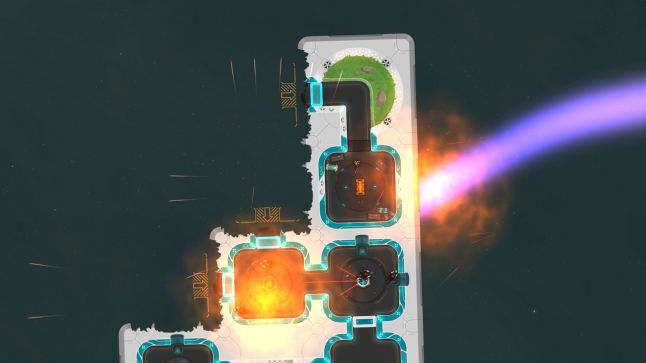 Modular destruction can make for even more disastrous outcomes in Heat Signature. How does this change how some players might approach the game? What do you feel this useful/disastrous ability adds to the challenge?

To be honest, this feature was probably a mistake. I think it works as a nice 'last resort' or 'exceptional circumstances' solution, but it was so insanely expensive to make that it probably wasn't worth it. The number of bugs and crashes and extra code complexity in other features that came from the fact that any given part of a ship might just stop existing, that a ship might split into three different ships, was crazy.

So, to your question, what it adds to the challenge is fairly minimal, but I think it does add to the fantasy: knowing you *can* hijack a ship and have a space battle in it and blow a piece off and then board that piece. That probably adds more to the excitement of being in this world than it does to the mechanically interesting solutions available to you.

I've been playing Into the Breach for a year now, and it's fantastic, even better than FTL. I think I've put in over 100 hours. Would be very happy to lose to that!

Visibility is the one we all talk about these days. I think that's sometimes seen as "How to market my game" but I don't think that's the hard bit. The hard bit is making something that's more worthy of attention than the other 200 games that came out that week. That bar is rising, and if you don't pass it then the marketing part is impossible. If you do, marketing is still a thing you've gotta put work and thought into, but it's nothing like as hard as passing that bar in the first place.