The Excellence in Narrative-nominated LIONKILLER casts the player as Hua Mulan, conscripted intoÂ into the First Opium War against the British Empire.
Alissa McAloon
Editor-in-Chief
January 28, 2020

LIONKILLER casts the player as Hua Mulan, conscripted into into the First Opium War against the British Empire. Through their choices, the player can chase their dream of running a flower shop, uncover conspiracies, or kiss a girl. But will these personal acts of rebellion change the history that's unraveling before them?

Gamasutra spoke with Sisi Jiang, sole developer of the Excellence in Narrative-nominated title, to talk about the power of finding your own means of fighting even if your fate cannot be changed, hoping the player can be stirred to feel and think through story, and the beauty that still comes from less-than-ideal development circumstances.

A background in history and Neopets

I'm Sisi Jiang, and I am the sole developer. Which means that any bugs you might encounter are fully mine. Sorry about that!

I come from roleplaying forums that were mostly run by girls who migrated from Neopets. I learned to code by taking apart and reassembling the code of better designers (with their stated permission, of course). Beyond that, I’ve never taken a single computer science course. My major in college was history, which probably helped in the historical research for LIONKILLER. I’m hoping that my nomination can show young designers that you don’t need an engineering background to make video games. 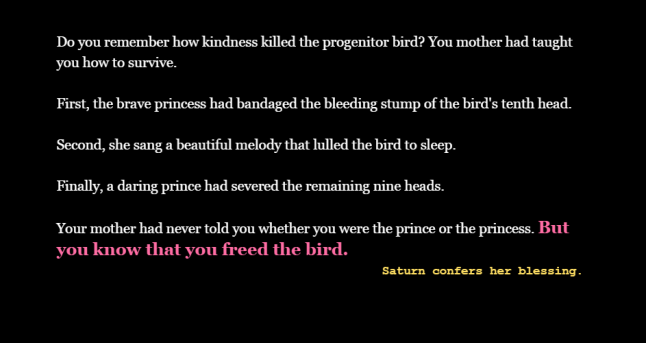 You know how marginalized fans are often told “If you don’t like the big franchise, then go make it yourself?” That was my reaction to Disney’s Mulan (1998). I saw it for the first time four years ago, and I was horrified that it had been turned into a “girl power” kind of story. I mean, that’s Disney, but I grew up with the ballad. For me, the story was about sacrificing a girl because the old man was more valuable to the family. I don’t think any amount of individual girl power can override living in a patriarchal society.

I used Twine, Photoshop, and a lot of online tutorials.

I know people are expecting me to say that I started with a political agenda (people will probably still say this), but the honest truth of it is that I have a history degree. I prefer researching modern history to classical history. The reason is because modern states have much better bookkeeping, so there were a lot more details to draw from when creating this game.

China gets invaded by different countries, depending on the version of Mulan. My academic background was mostly in the 19th-20th centuries. Guess who was the most powerful empire back then! I needed an actually threatening villain, so I started following the breadcrumbs to the First Opium War. Once I got there, I started feeling that the wars were linked to the larger British strategy of trying to conquer all of Asia. British India would produce raw materials (opium) and provide the soldiers (sepoys).

I linked LIONKILLER to the campaigns in Central Asia by making the British officer a veteran of the first Anglo-Afghan war (look up “the Great Game”). My secret is that I had to cut 40 percent of the original game for scope and budget reasons, but I wanted to bring in a more colorful cast of characters. More intrigue! More unlikely historical alliances! Unfortunately, scope cuts are a painful reality of game development. It still blows my mind that people can play one route in a scoped-down game and think that’s the canon LIONKILLER. 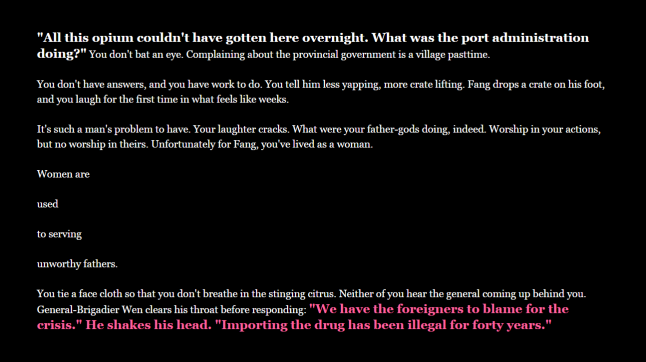 The challenges of the branching narrative

The branching itself wasn’t that hard, I think the real issue was trying to create the illusion of choice while keeping scope creep under control. Like, if I branched too early and closed the branch too late, I’d create too much of a burden for content needs. I think I eased the pressure once I saw the playtest comments and realized that most players don’t really think about the alternative paths other than the one that they’re currently on. And most people only play the game once.

Choice is really fragile in LIONKILLER. I mean, the whole story revolves around a conscription. Why choose if your decisions still lead to a war that you didn’t sign up for? Why choose anything if your fate is still etched into the stars? I think that question is relevant to a lot of young people who have been pigeonholed into careers they didn’t want.

LIONKILLER presents players with private moments of rebellion that are meant to keep their hearts human. I mean, you can’t actually desert with the Brigadier-General’s horse, but you could make an unsuccessful attempt. You’ll be punished for it, but you’re using the game as a tool to express your dissatisfaction. That was important to me because I always considered Mulan a story about filial piety, even at the expense of selfhood. As the designer, I wanted to make it clear that the player’s anger and discomfort mattered.

There were a lot of choices that didn’t affect the outcome in part one because I thought that it was important as a part of a war story. The main character had a whole life ambition. They want to open a flower shop, or they want to run away with a girl. I authored those things, but the player gets to pick the dream that the character has. That’s important. Just because a hero is being called to some greater good doesn’t mean that their dreams just went away. Players usually feel very upset when they think that a roleplaying game ignored all of their choices. I used that psychological tendency as a way to convey the feeling of loss.

On the difficulties that come from collaborative storytelling with the player

This situation isn’t really unique to LIONKILLER; it’s a question that every narrative designer in the industry has to grapple with. I have a lot more freedom, but every game is inherently collaborative. Even if I wrote a completely linear story with straightforward characters, I can’t control how players think and feel inside of their heads. My advice is to embrace that. Create characters who sink their meat hooks into your player’s heart; create content that doesn’t let go without dislodging some buried thoughts from their dusty brains. Mulan is not an avatar, they’re a vehicle for transporting you into no-win situations.

I see my characters as tools, and not purely extensions of my ego. That doesn’t mean that they’re objective or bias-free (Mulan is a passive-aggressive complainer). It just means that they’re props that I use to create the narrative. The character of Hua Mulan is not a person, the player is a person. As a designer, I know that I have trapped my player into terrible situations. That’s why I always use the game’s narrative voice to comfort, rather than condemn their choices. I was the one who wrote those choices!

I give the player absolute narrative control in a moment in part three where I ask the player to type in their opinion of the British Empire. The game acknowledges and canonizes the player’s response on the next screen. I took a risk, since the player could still force Mulan to state: “May the sun never set on the British Empire.” However, it would be more powerful if the player chose to condemn the empire on their own terms. My player has always been my partner-in-crime, and that input screen is my ultimate expression of trust. 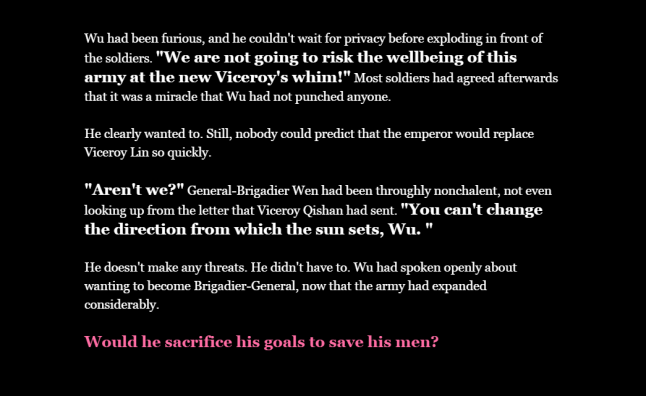 I have some friends who have trouble reading certain colors on computer screens, so I ran my new color choices past them for accessibility reasons. Purple indicates that there is more text on the page, while pink indicates that you’re moving to a new passage. The crimson on a few passages in part three indicate that the British officers are speaking. My next project focuses on UI even more, and the reason is because I didn’t have the budget to hire an artist. UI can be the visual interest if you’re not a game artist.

I did have a line of dialogue that looks super distorted, and it’s when the British officer is yelling at Mulan in English. I thought it was fun because Chinese and Arabic are so frequently represented as random scribbles. I bet most players have never seen English represented like that before.

On what they wanted the player to feel

What I do as a narrative game designer is that I allow players to express their emotions through the computer (a tool). I can’t put any feelings into somebody who didn’t already feel that compulsion. So a player can feel sad about a scene that made another player angry. Dialogue that made me feel cathartic might be painful for another. I don’t know what path players took in the game, and I don’t know the personal path that the player took in life. These two paths create far too many possibilities for me to account for. I’m not a god, I’m just a shady fortune-teller with tricky sleights-of-hand.

What ending they preferred

I do have one! It wasn’t planned and it wasn’t written in the most ideal circumstances (welcome to game development). You get this ending by coming clean about your gender and asking these men for their solidarity. By the way, these men have betrayed the Brigadier-General’s trust. They have skipped their military duties, and they have been lying to their superiors. All for their own survival. By any society’s metric, they are untrustworthy. But Mulan was also a liar. Can a liar condemn others who have lied? It’s a paradox.

I’m not telling other queer people to forgive unreliable people in their lives. This game will never judge the player for withholding their heart. This game doesn’t ask you to forgive these men. They don’t deserve forgiveness. But earning their trust and agreeing to save them is the only way to secure their cooperation. And sometimes, being vulnerable in the den of lions is what it takes to save other things that you love.