Road to the IGF: Pixpil's Eastward

Eastward has playersÂ guide a miner and mysterious girl through a broken world, meeting quirky new friends as they seek answers about the girl's identity.
Alissa McAloon
Editor-in-Chief
March 19, 2020

Eastward has players guide a miner and mysterious girl through a broken world, meeting quirky new friends as they seek answers about the girl's identity.

Pixpil, developers of the Excellence in Visual Art-nominated title, had a chat with Gamasutra about the inspirations and places tha influenced its art style, how they then used that art to create an inclination to explore, and how parenthood affected some of the gameplay elements they wanted to bring to the game.

Zhou: My name is Tommo Zhou, one of the founders of Pixpil. I'm also the producer and the main programmer of Eastward. I was just a hobbyist developer trying to break into the industry before I met Hong Moran. He had just quit his job as a pixel artist at a mobile game company. I really admired Moran's artistic talent and vision, and luckily I managed to persuade him to team up with me!

At first, we tried to set up our own business working on mobile titles, but after some unsuccessful attempts we realized that we had to focus on something we were both good at. After Feng Ye joined us as a designer, we started to work on Eastward. 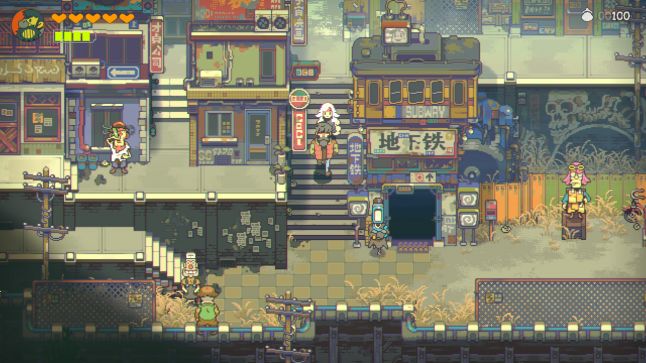 Creating the concept of Eastward

Feng: It started with Moran, our Lead Artist, who drew some sketches about a weird monster dormitory building resembling Hong Kong's Kowloon Walled City. We got excited about the design and came up with a game to fit around the aesthetic.

In the beginning, we brainstormed several ideas, including a mobile puzzle title, eventually landing on the idea of a story-rich action JRPG. Zhou, co-founder of the studio, came up with the name and a few key concepts that defined the Eastward universe. I think it was on that day that marked the true beginning of Eastward.

The tools to create Eastward

Zhou: We love tools, but we don't have a very long list of dev tools for Eastward. Eastward is built with our in-house game engine called Gii. It has a Unity-like environment for asset management and scene designing.(Screenshots) It's built on top of an open source engine called MOAI. Other than that, we mainly use Aseprite for animations and Photoshop for designing. We also made some tools to automate asset workflows so the artists could focus more on their creations.

Creating a need to explore

Zhou: Moran is a very experienced pixel artist and he has a really good sense of colors. But, more importantly, he is a good thinker - he is always keen to explore posiblities in art creation. Speaking of the style, we simply hope everything looks interesting to the player!

Strong colors, various buildings and objects, rich and subtle details... with all this effort, we hope we can seize the players' attention, and then invite them to explore and connect with the world.

Moran: We didn't do it intentionally - it seemed the art style just naturally formed there. With further thoughts, I think it's that people tend to romanticize old, forgotten, or abandoned worlds, like those photographers seeking ruins whose works we enjoy very much. Those seemingly-haunted scenes can inspire stories and trigger the intention of exploring, which is good for RPGs. Combined with different visions of those worlds, the feeling of an emotional void fell right into our storyline. 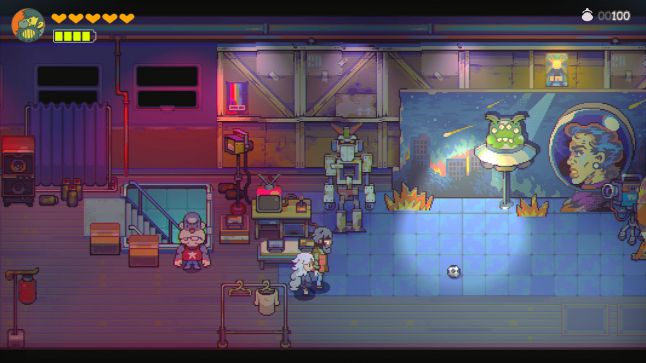 Inspirations for the game's world

Moran: The aesthetic of the game is a 'decayed' world, but we wanted to make it look lively because people are still living there, actively, in their own unique way. It's the uniqueness makes people remember. I hope people can find at least one special part of each character and environment. I believe this is vital to the game world, because it's the biggest part of the satisfaction in exploration, and that's what we've been trying to achieve. There are more than 200 different characters in the game, and we try our best to make each of them convincing and unique.

The game is also greatly influenced by real world Asian cities like Hong Kong and Shanghai, as well as other real world inspirations like Showa and Taisho period of Japanese towns and their architectures. You can even find in-game architecture inspired by places like Korea and India. They are all a bit mixed-up, so you might find the place both familiar and unfamiliar.

Joel Corelitz: I think it’s hard to make new music stand out if the only thing driving it is nostalgia, so I took Eastward’s score a few steps further. Using a palette that’s equal parts modern and retro, I focused on strong themes and melodies with simple arrangements because those never go out of style. It’s almost an enhanced, updated version of nostalgia that incorporates my own musical sensibilities, and I think it will feel fresh for a long time. 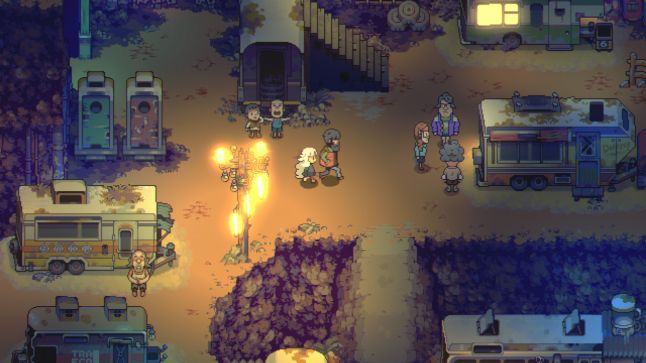 The games & Anime that inspired Eastward

Moran: A few examples of these animations are Macross, Akira, Cowboy Bebop, Memories, works from Ghibli Studio, etc. All of these franchises have their own strong, unique aesthetics, and are trying to build deep emotional connections with the audience.

Zhou: In fact, the most influential inspiration comes from the Mother game series. Moran was a huge fan of it and we both equally admired the way it presents the world and tells its story. "It plays like an animated movie" - that's the target we were aiming for.

I can't remember exactly why, but we decided to make it a dual-character game from the very beginning. Ye and I both have kids, so the 'father & child' theme allowed us to make emotional moments in the game that we could connect to.

However, it took a very long time for the dual-character gameplay to shape up. At first, Sam was just an NPC who followed John around, but after several iterations, we decided it was impossible to make Sam stand out without giving her a more important role in the actual gameplay. When we realized this, we started to add more abilities and controls. Allowing the separation of the characters was a hard decision because it introduced so many technical challenges, but in the end, we decided to keep working on improving it because it was more fun that way.

This game, an IGF 2020 honoree, is featured as part of the Independent Games Festival ceremony, which was streamed digitally this week and can be viewed on demand on GDC's  YouTube channel.