Seers Isle is a visual novel that explores player agency in the genre, casting them as an invisible character who must use choice to change her fate.
Alissa McAloon
Editor-in-Chief
January 22, 2019

Seers Isle is a visual novel that explores player agency in the genre, casting them as an invisible character who must use choice to change her fate.

Gamasutra sat down with Geoffroy Vincens, writer for the Excellence in Narrative-nominated Seers Isle, and Nico Fouqué, its Art Director, to talk about exploring the player's role through the story of the game, as well as the complexities of telling a good story while giving players control of it.

A team of storytellers

The core of the team is composed of three people working full-time: Raphaël Le Bobinnec, who's the lead developer in charge of all things technical, Nico Fouqué, who's responsible for the art direction of our games and most of the illustrations themselves, and me, Geoffroy. I'm the writer, and I'm also in charge of the boring administrative stuff.

For everything we don't do in-house, we rely on a network of talented freelancers. For Seers Isle, we worked with two movie music composers: Camille Marcos and Julien Ponsoda. We had Rachel Capie and Alix de Yelst for the English translation and proofreading of the vast amount of text that's in the game. We also had the chance to work with three talented art interns during the production: Ambre Sedogdo, Esther Chahian and Manon Salomon. 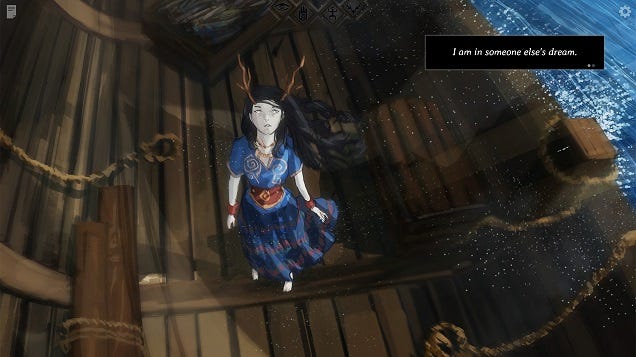 A history in narrative

Vincens: Nova-box has been around for quite a while, now. I founded the company in 2007, and during the first years we were mainly subcontractors for bigger game studios in the Bordeaux area, working on Nintendo DS titles. Since 2013, we've been releasing narrative games, starting with Echoes between 2013 and 2015 (it was an episodic game for iPhone and iPad), then Along the Edge in 2016.

In 2017, we created an interactive "novella" called Orphan Age: Diaries for our friends and fellow game developers, Studio Black Flag, to flesh out the universe and help promote their next title, Orphan Age. Orphan Age: Diaries got a limited release in 2018 during Orphan Age's Kickstarter campaign, but it should be made widely available in the near future.

Fouqué: I started working as a game artist in 2007 too. I have a "master-of-none" profile, but I always was interested in illustration, and of course comics art.

An inspiration to explore the player's role in visual novels

Fouqué: Our inspirations came, of course, from visual novel games. Visual novels were still quite "underground" in France back in 2012. It was our friend, Frédéric "Ekmule" Lignac (who co-wrote our first narrative game, Echoes), who had this idea. We all thought it was great. So, despite the commercial failure of Echoes, we decided to go on making narrative games. We wanted them to be focused on the literary aspect, like a “Choose Your Own Adventure” book. The text is really the most important aspect of our games: it is our main tool for storytelling and interactivity.

Vincens: When we finished releasing Echoes back in 2015, Fouqué and I both came up with a concept for our next game. I had written the synopsis of what would become Along the Edge, our 2016 game, while Nico came up with the concept of what would become Seers Isle. We decided to go for Along the Edge first, as it was the less ambitious project of the two.

So, the project had a long inception time, and it evolved in an organic way over the years. We knew that what we wanted to do, however, was to use a fantasy setting, and that our piece would question the agency of the player in interactive fiction. 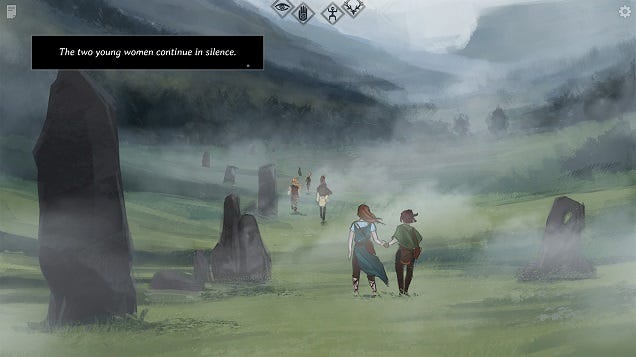 Fouqué: The main idea was to tell a story in which player agency makes sense. In Seers Isle, our main character, Rowan, is in a situation really close to a visual novel player: she is invisible to the other characters and she has only a few shots to change the course of events. Also, I was eager to make a love story. As it happens, this aspect became very secondary in the end.

Vincens: As Fouqué said, we wanted to explore a meta-narrative about the agency of the player in the context of a narrative game. Thus, the themes of the story came quite naturally, as the narrative revolves around the notions of fate and sacrifice: you play an invisible narrator who’s trying to change her fate with very limited ways to interact with the other characters.

Vincens: There are several options to make a story interactive. Some narrative games are only superficially interactive, with each choice leading back to the main plot no matter what (and it's completely ok, a story doesn't have to be interactive to be truly compelling. Thousands and thousands of books, movies, or comic books can attest to that). Some are driven by a "die and retry" mechanic, where you have to make the right sequence of choices to get to the end.

What I'm trying to achieve is to make the multiple paths and endings equally compelling, and to tailor them to the player preferences and inclinations, taking each small choice along the way into account.

Fouqué: We are definitely not in the "big, epic moral choices" thing. Our goal is to determine a personality through a variety of small, frequent choices. They are not always dramatic in their consequences, but they give us directions to drive the story and ultimately decide of the endings.

Vincens: In Seers Isle, most of the decisions impact the story on two axis, represented by the icons that are shown at the top screen that are highlighted after the player makes a decision that impacts these variables: the “Hand”, the “Eye”, the “Deer” and the “Man”.

We voluntarily keep the meaning of these variables a mystery so that the player has to guess what each of them mean. Of course, these variables are related to the main themes we wanted to explore in the game, so that gives me a broad framework of which questions to ask and which alternatives to give to the player all along the story.

Fouqué: These directions will also bring you closer to one of the characters in the game. This will gradually unlock back stories, details, and, of course, new choices about the character and the setting. 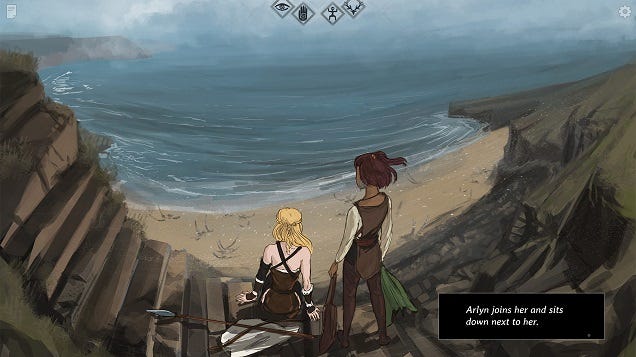 Letting the player create their own conclusions through interactivity

Vincens: Of course, interactivity isn’t mandatory to make a story compelling. However, Seers Isle (and every story we tell) wouldn’t make sense without interactivity. In non-interactive storytelling, the spectator (or the reader) has no agency at all. As an author, your job is to demonstrate your point through your characters and your plot. However, when you add interactivity to your story, you have to take a step back and let the player draw their own conclusions. You can’t demonstrate anything unless you’re in a “die-and-retry” design.

We try to give a great experience to the players on their first play-through, but in the case of Seers Isle, the story makes more and more sense as you explore the different possible storylines.

Fouqué: The main reason for me is experimentation. Interactive stories are quite new - there's a lot of things to try and discover, and new tools to write and read them. Also, I'm fascinated by this feeling that "things could have been so different" and the question of free will. Interactive stories are a really good way to explore these questions. It's not the only way, of course, as a good passive story could do it too. I'm just more interested in experimenting [with] interactive stories, for now.

Evoking the imagination through art without 'overwriting the text'

Vincens: Our games fit broadly in the visual novel genre, and it’s more apparent in our earlier releases which use most of the codes of the visual novel but with a European comic book art style. Visual novels borrowed a lot from the JRPG method of storytelling and we wanted to distance ourselves from that, while also using a visual grammar that felt closer to us, so we ended up taking inspiration in the “bande dessinée”.

Fouqué: We wanted Seers Isle to feel like a book. That was also the case for Along the Edge. As we said, our narrative games are text-focused. For visual art, we need a powerful way to activate the imagination without overwriting the text. The simplest way for me to achieve this was to borrow from the comic-book style. It is not so much about what it adds to the story than what it does not take away from it. We might explore different stories in the future, maybe centered on exploration or management simulation, but for Seers Isle a comic book style with minimal animations seemed suitable.

Fouqué : Although the text is the only interactive element in Seers Isle, visual elements and texts are working together on a creative point of view. For example, character appearances and their expressions complement with text descriptions and dialog lines to give them a global feeling.

There are also some feelings about the visuals in the game that are totally subjective: the player can decide whether a situation is worrying or reassuring without any notice from the text. This is a good way to get the player to form their own opinion. Finally, here and there, we can use different versions of the same picture, depending on the narrator's state of mind. We had more of this in Along the Edge though, because Seers Isle is the story of a journey, so the places often change.