Road to the IGF: Infinite Fall's Night in the Woods

Night in the Woods aims to capture that feeling of trying to go home to a place that no longer exists, following Mae back to her old town and friends to find it all very different now.
Kris Graft
Publisher
March 01, 2018

Night in the Woods aims to capture that feeling of trying to go home to a place that no longer exists, following Mae back to her old town and friends to find it all very different now. Through interacting with the people and familiar places, though, perhaps players can come to terms with these changes and the inevitability of adulthood.

Gamasutra spoke with Scott Benson, Bethany Hockenberry, and Alec Holowka of Infinite Fall, developers of Night in the Woods, to talk about creating a town that feels like coming home again, and how they created the natural connections and problems the game’s animal characters wrestle with.

Benson: None! Alec’s the guy with experience here.

Hockenberry: None at all!

Holowka: I started making games at age eight when my Dad decided that I’d been playing too many video games. He bought me a book called “BASIC Fun” and invited my cousin Robbie over to teach me how IF statements worked. Ever since the,n I’ve been making games!

Around 2005/2006, I started collaborating with Derek Yu, and we made a game called Aquaria together. That project did well enough that it could support us going indie full time. 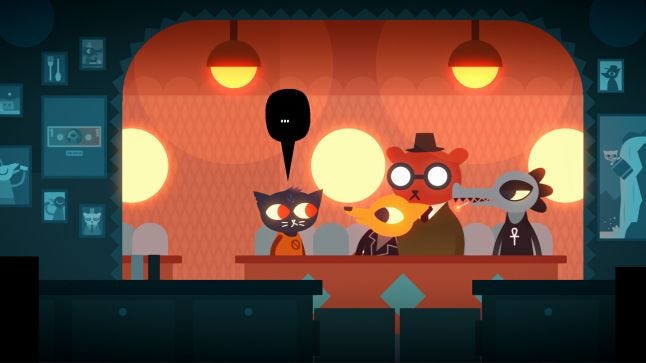 Benson: Alec asked me if I wanted to make a video game with him and I said yes because it sounded like fun. We kicked around some ideas, but weren’t super attached to any of them, but we did end up with the name Night In The Woods, as well as a general desire to explore subjects like depression and transitional periods in life. One night, randomly, I just dashed out an idea based on the punk kids I’d spent my teens and early adult life around, taking place in an area similar to where I’d lived half of my life, and where Bethany had spent her entire life. I drew up some animal people characters because I was better at drawing those than real people. I sent it over to Alec wondering if he’d think it was alright, which he did, and we further refined the idea. Then, we got to work.

Holowka: We also built a tool named Yarn (that is kind of like Twine) to handle implementing dialogue into the game. It’s open-sourced, and a few other indie games have used it.

Benson: About 3.5 years from concept to initial release, then several months afterward on the Weird Autumn Edition. 3.75 years for the whole thing? Something like that? 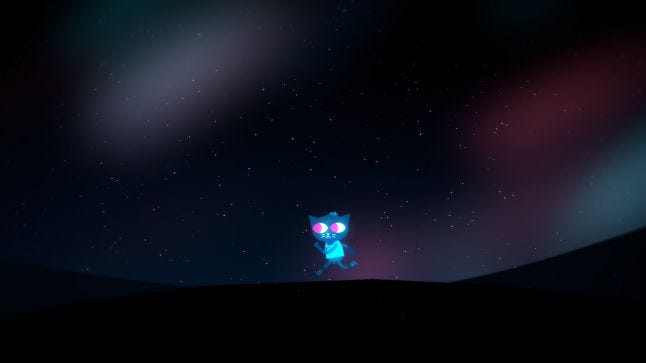 What did you want to capture about trying to go home again with Night in the Woods?

Benson: One aspect was just the idea of something central to you not being available anymore. That’s a repeated theme throughout the game. Knowing when to hold on and let go is a very adult struggle, and I think the time of life Mae is in presents the first time you’re confronted with that for a lot of people. Mae’s in that time where she’s still having a lot of firsts, but is also right on the verge of some big lasts.

Hockenberry: That you may not be able to “go home again”, but that your relationship with your home can evolve and still be meaningful to you even if everything (and you) are not the same, and there are parts (physically or otherwise) that you can’t get to anymore. They’re still a part of you, but you’ve just got to figure out how to access all of it now - to recognize the losses and changes.

Possum Springs was a key element in making the player feel like they were returning to a familiar place. How did you design the setting with that feeling in mind?

Benson: We were all really interested in making it a place that felt lived in, where people were walking around, having lives, where squirrels and birds were doing their thing, where cars were going somewhere from somewhere. Also, on the writing end, we tried to make sure that Mae had history with everything and a lot of the people around town. We also tried to make sure that the people around town and the town itself had history all by themselves that weren’t driven by Mae much at all. So, Mae could be in a state of both familiarity and discovery throughout. Bethany’s research and personal history was key to this, as was Alec’s extremely on-point music.

Hockenberry: For me, it was to make sure to include the little things you may not immediately think of, but are always there. That one house who puts out way too many Christmas decorations, the flowers that show up on the utility pole at the same time every year, that weird sculpture on the top of an old building. You may not think about them everyday, you may not notice them at all, but if they were ever missing you’d immediately feel like something about that place was off.

Benson: I think we were just interested in talking sincerely about real stuff, and about giving characters their own subjectivity. That last part is crucial. The characters need to have inner lives that have nothing to do with the player or even sometimes moving the plot along. They need their own interests and problems that you, as a player, can’t access in any hands-on way, and aren’t there to direct the player. That helps make them into people and not feel as much like pieces on a gameboard. It also helps to create characters that are not vehicles for player empowerment.

Hockenberry: Writing characters that are people. Everyone messes up, says something they wish they hadn’t, forgets important things, or is a jerk to someone. This is part of being a human. Sometimes you can fix these things, sometimes you can’t. 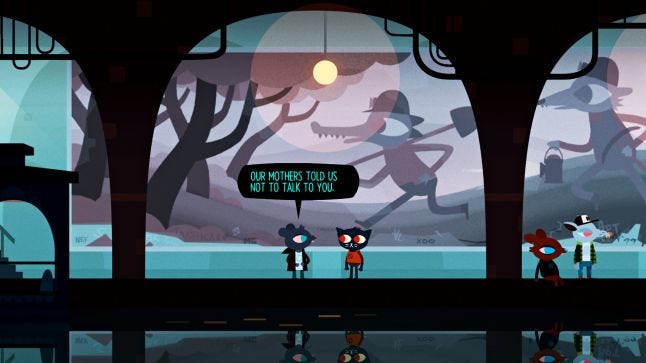 Games often accept the player as an important, necessary piece of the world, but Night in the Woods is the opposite, bringing players to a place they no longer fit. How does this affect how you design the game? How do you convey this sense of otherness through the game?

Benson: We made the decision early on that Mae was not a vessel for the player so much as the player was going through Mae’s story with Mae’s ideas and Mae’s reactions. We also decided that Mae would have her own deep issues, and you would not be able to just fix everything with the right choices. Because that’s not how life is, right? And so many games are the story of a proficient problem-solving character. Mae isn’t smarter, cooler, or better at things than most people who play the game, but her problems are things that a lot of people deal with.

So, making her a relatable dirtball idiot in the way we all sometimes (or always) are opened up this wide vista of possibilities. Conflicts you don’t have access to, but have huge access to you. Puzzles with no solutions. Characters that have to deal with all of that in their day-to-day lives. You can call it player disempowerment, but honestly these are the stories and characters that get closer to what we all deal with on a regular basis, I think, and there’s a real life and honesty to characters like that.

Benson: I really loved Tacoma and thought the central mechanic was utterly brilliant. Hollow Knight is also very good. Intricate and lovingly made, that one, and the characters are so charming and well-animated.

Holowka: I unfortunately haven’t played many of them, but I’m hoping to remedy that soon now that our work on NITW is (mostly?) done.

Benson: Biggest hurdle, by far: money. Biggest opportunity: to make art and tell stories in new and exciting ways, to work with really great people, and to connect with people through your game.