Road to the IGF: Hempuli Oy's Baba Is You

Baba Is You is a puzzle game of manipulating rules, one where the regulations of a given stage are blocks players can move around to change how each area is played.
Kris Graft
Publisher
February 15, 2018

Baba Is You is a puzzle game of manipulating rules, one where the regulations of a given stage are blocks players can move around to change how each area is played. By shuffling these rule blocks around, players can make grass lethal, make walls passable, or shift the goal of a stage with some clever wordplay.

Gamasutra spoke with Arvi Teikari, developer of Baba Is You, about creating fun, sometimes-surprising solutions to puzzles that players can shuffle around as they see fit in the Seamus McNally Grand Prize-nominated entry.

I've made games since primary school; I started by dabbling with QuickBasic and Game Maker, but lack of skill in English & lack of motivation to learn programming made those rather inefficient tools. I eventually stumbled into Clickteam's products and have used them ever since. It took me until 2008 or so to start putting my games online, focusing on experimental platformers and jam games at first. In 2015, my company released its first commercial title, Environmental Station Alpha. I've also been part of the team developing the game Noita from 2013, working mainly as an artist. 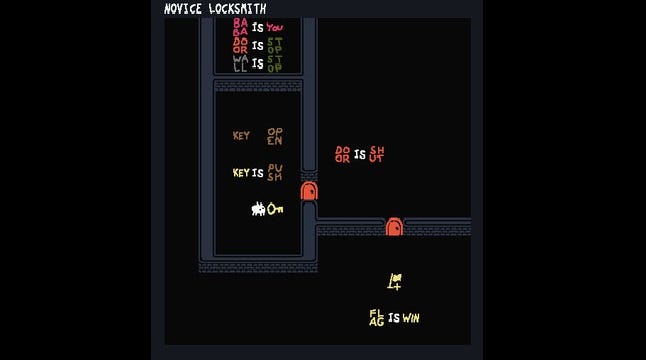 The theme of the Nordic Game Jam 2017 was "Not there", which made me think of the logic operator "Not". I had been playing a lot of puzzle games for some time before the jam (including such titles as Jelly no Puzzle, Recursed, Stephen's Sausage Roll, Snakebird, and Corrypt), and my guess is that the ideas I'd gathered from those games combined with this concept of a logic operator and gave me a mental image of pushing words to create rules. I don't remember the exact thought process, though.

As mentioned earlier, I've used Clickteam tools for every game I've made on my own, and the same goes for Baba Is You. The game was made using Multimedia Fusion 2, although some 2 years ago my friend Lukas 'Looki' Meller introduced me to a plug-in that allowed lua integration (and taught me how to use lua), and ever since, all my projects have had a heavy emphasis on lua due to its power in comparison to MMF2. Lukas Meller has helped me in my game development in many other ways, too, over the years, and I definitely wouldn't be where I am now without them. For audio I've used OpenMPT, a tracker software, and Audacity.

The game is still in development, so it's hard to estimate the total time, but I've spent most of my personal development time on Baba Is You for the past 8 months. Note that I also have a job working on Noita, as well as studying in the University of Helsinki, so there have been times where my ability to work on Baba has been somewhat limited. 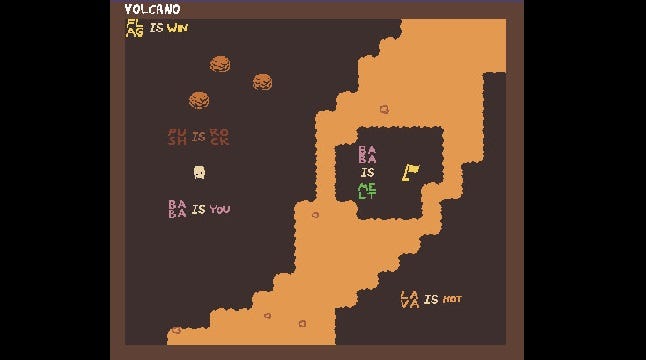 What thoughts go into creating puzzles in a game where players can easily change the rules?

I usually approach the puzzles by thinking of cool or amusing combinations/interactions between the words, and then working backwards to make up a level that requires using said interactions to beat it. Usually, after finishing a level so that the intended solution exists, I go through the level a couple times more to catch what unintended solutions I can find and then block them (or leave them in if I feel they're interesting enough). Playtesting has shown that it's extremely easy to be blind to certain types of unintended solutions, so testers have been extremely helpful in making the levels less easily breakable.

How did you decide on the types of blocks players would manipulate to solve Baba Is You's puzzles? On creating fun, interesting ways to create effects in the game's world?

There were some basic blocks that came pretty naturally and that I implemented for the original Jam version (e.g. push, win, stop etc). After that, there have been essentially two ways I've come up with new words to use (not counting situations where someone else has suggested a word). The first way comes up in situations where I need a specific word to make some levels work or flow better (a good example is Shift, which makes objects behave like conveyor belts). I guess these words are borne out of necessity.

The other way occurs when I brainstorm interesting and/or wild ways the objects in the world can interact and end up with something that doesn't really help with making existing puzzles better, but can be used in itself as a centerpiece of new puzzles (for example More, which makes objects multiply every turn).

What do you feel is so appealing about playing with a game's rules? In altering its world in surprising or creative ways?

I'd say "surprise" is the right word; the game's mechanics have a lot of potential for puzzles that are hard to wrap one's head around but that are ultimately simple, which creates a sense of wonder (or something like that.). I feel that often the most satisfying moments in puzzle games are those which present the player with simple but hard-to-wrap-your-head-around situations, so that solving the puzzle is about figuring out that *one* neat trick/twist.

For example, the puzzle game Braid has a puzzle where the player is given a single key and two locked doors. The rules in play in that level allows opening both doors with the single key, and there's something really satisfying in the way the seemingly impossible turns out to be fairly simple once it's done. 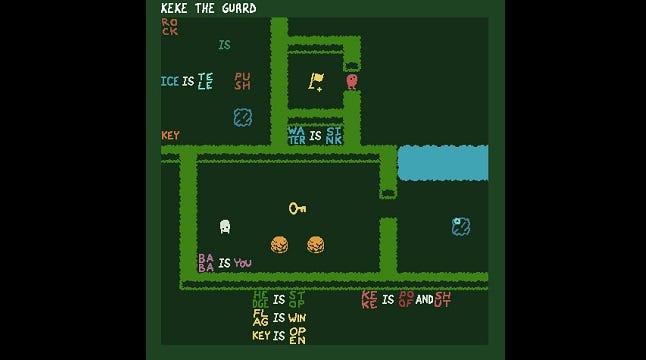 I've played Getting Over It with Bennett Foddy, Night in the Woods, and Uurnog (although an earlier version than Uurnog Uurnlimited). There are also some games I'm fairly familiar with despite not having played them such as Tormentor X Punisher, Cuphead, and Rain World. I played Night in the Woods together with my girlfriend and it was an extremely nice experience. Uurnog is also very, very charming, and, although I haven't beaten the game myself, Getting Over It has been a very cool recreation of an old classic. I'll definitely want to try out some entries later on, because with the saturated indie market we have these days there are many finalists I hadn't even heard of!

I guess the most obvious answer is "market saturation", although the full answer is most probably way more complicated. Right now, there are way fewer reasons to make small, experimental indie games (outside of jams and other such events) because small communities such as game developer forums are largely dead in favour of social media and because (and largely as a result of the former) the way to actually get an audience for a game is to put it on a marketplace such as Steam. It feels funnily backwards, that games get a larger playerbase if they're not freeware! I can imagine it being very discouraging for new indie devs that it can be very hard to find an audience or just get feedback for a small freeware game.

On the other hand, there's a huge amount of people who play videogames these days, so I feel there're more opportunities for finding a niche for oneself nowadays, once one gets past that initial hurdle of getting a game up on a marketplace and getting enough audience that the game can be taken in by the community of said niche. Obviously, I'm not a person who actually knows much about these things, so this is very much based on gut feelings and not facts.