Penny Blue Finds A Clue will have players following an incorrigible tween sleuth, one who seems awfully content to let the player do all the work in this animated mystery.
Joel Couture
Contributor
March 13, 2018

Penny Blue Finds A Clue will have players following an incorrigible tween sleuth, one who seems awfully content to let the player do all the work in this animated mystery. Following the clues in this narrative-based game will have players steadily homing in on their suspect, but they should expect Penny to take all the credit even if she didn't really lift a finger.

Gamasutra spoke with Lauren Stutzriem of Cactus Curse Games, developers of Penny Blue Finds A Clue, to learn about why they stuck the player with the lazy, but gutsy, Penny, and how they worked to create interesting characters and a solid mystery to tie them all together.

We all just graduated from Digipen Institute of Technology. Penny Blue Finds a Clue (Penny Blue) was our senior capstone project. At our school, the game designers, sound designers, and programmers make year-long game projects on teams for every year of their education, as well as many smaller individual game projects they complete for specific classes.

The artists, however did not have as many opportunities to apply their skills to game projects for credit. Up to our senior year, they would be busy working on animated short films instead. For some of the artists on Penny Blue, this was the first and only student game they ever worked on.

As one of those artists, I still felt fairly prepared to direct a game because of the experiences I had gained up to that point at Digipen in story design, storyboarding, and animation direction. Our awesome teammates and instructors helped us learn the games pipeline on the job. 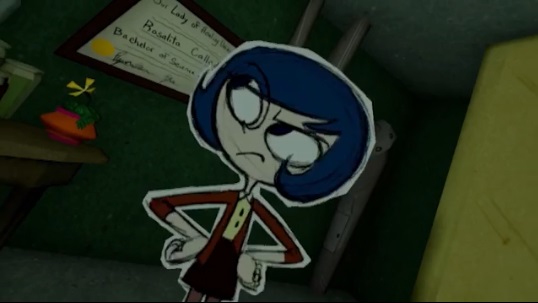 I have been a huge fan of the Nancy Drew PC games for 17 years now. I live for the heroism, action, and intrigue of solving mysteries, but I can't stand puzzles. I don't want to use my brain; I just want to sneak around and break into stuff. I'd always find someone to do the hard parts for me.

On Christmas of my junior year, I had just finished Nancy Drew: Sea of Darkness with my friend who did ALL the hard work for me on the most puzzle-heavy Nancy Drew game to date. Both of us were exhausted even though I did nothing but impatiently complain while he slaved away. It was an exasperating yet hilarious dynamic for both of us.

That's when I mused about making a Nancy Drew-inspired mystery game series about a self-important celebrity teen detective who suckers someone else into doing all the detective work for her, then takes all the credit at the end. Penny Blue Finds A Clue almost immediately came to mind for the title, probably due to a subconscious collision of Nancy Drew, Scooby Doo, Where Are You?, and Blue's Clues.

I started story-brainstorming with my fellow character animator and story artist Cara Kornhaus late junior year. Summer before senior year, Jesse Hibbs, our lead designer, was the first person to respond to my ad for developers. When he and Thornton Prime, our sound designer, first met up with me they said were excited to get started under the condition that we make the game in first person (rather than the initial idea of point-and-click.). They were intent on creating a new and uniquely immersive take on the adventure games of yore, such as our favorite, Grim Fandango. They also had their hearts set on developing in Unreal Engine.

We built the game in Unreal. The developers had to really wrestle with the engine to do some of the things we needed it to do. If we made it in Unity, it would have been a piece of cake. We would laugh and cry about that periodically, but the game looking gorgeous made it worth it. Leo Saikali, our narrative designer and lead writer, created the dialogue system from scratch in blueprints, utilizing excel sheets, which was an impressive feat.

For the technical sound design, Thornton used WWise and integrated it with Unreal. He did all the sound implementation and audio programming himself. He also composed all the music and directed a small team of student voice actors.

As for the art, the environment was made entirely in Maya, with textures done by hand in Photoshop. The animations were done traditionally with pencil, paper and lightbox. The frames were scanned in, then cut out by hand with a polygonal lasso tool to capture the paper-doll look. Then we would create a sprite sheet, which we took directly into Unreal's flipbook editor where the animations were timed.

Production lasted for the 8 months of our senior year on top of our other classes. We worked together for an extra couple months before and after the academic year for pre-production and polishing it for PAX and IndieCade. 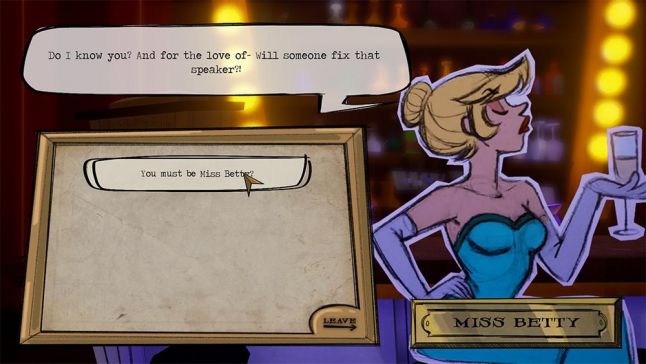 What are some of the important points in creating a good murder mystery?

Good question! I think the best tool we discovered was to work backwards. Decide the 5 W's (who, what, where, when & why), decide your clues and what stories they will tell, then scatter them. Of course, creating a mystery adventure game is much more complicated than a written, linear story. We definitely struggled with our "clue map," which was our catch-all term for "anything and everything in the game." That is, the web of how clues and character interactions should unlock in a specific order in order to uncover the backstory in a specific order, all while ensuring the player still felt autonomous.

After many attempts, we finally found that “working backwards” was what worked best. We pinned down the important moments in the story and then filled in the gaps with storytelling clues.

How did you apply those to Penny Blue Finds A Clue?

For Penny Blue, we actually decided in the beginning we didn't want to focus on creating some mind-blowingly clever mystery. It would detract from our two main goals. One, we wanted to create an off-the-wall, teen detective parody narrative with a tender heart to it. Two, we wanted to tell as much of that narrative as possible through an immersive space filled with storytelling elements.

Penny Blue Finds A Clue has a memorable cast of potential rogues. How did you make these characters stand out with their story and the visuals?

Thank you for saying so! The visuals turned out even better than we hoped. We definitely wanted to do a 2D-3D style right off the bat. Erica Hanson, our art lead, did a lot of look-and-feel experiments to get the paper-cut-out characters to look at home in a wonky, Laika-inspired 3D environment. When we discovered the cinematic trailer for Don't Starve, we got a much better idea of what we wanted. The character design and animations were heavily inspired by being trained by former Disney animators at Digipen.

As for the story, my favorite part of the development process was howling with laughter about these characters with everyone during story meetings. I can say for certain we all loved and knew the characters deeply, which was why it came out so strong. We dug deep into their absurd relationship dynamics and tragic pasts beyond what was included in the game. We wanted the characters to be wacky, but not unbelievable. We wanted players to be able to empathize with them on a heart level. 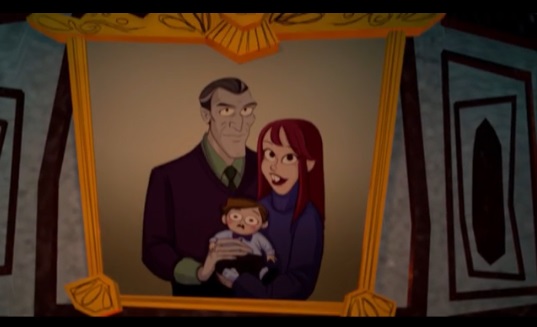 What drew you to the child detective heroine? In having the player work together with her rather than being the sole protagonist?

Harkening back to the Nancy Drew inspiration, we wanted a teen detective. When we decided that the game would be in first person, suddenly we realized the player wouldn't be able to see Penny! And we really wanted to be able to see and interact with Penny. After deliberating, we decided to age Penny down to a tween and make the player her babysitter, because it was the funniest option among family member, friend, or love interest. As her babysitter, you get the most colorful experience of Penny as an endearing yet insufferable child who refuses to respect your authority.

Yes, actually! Guardian of the Gears, another Best Student Game finalist, was actually made by our friends, Studio 76, the team that sat directly next to us at Digipen for all of senior year. We would get so jealous when they played their trailer on the TV in their team space!  Their game is just so beautiful and well made.

Other than that, we are really looking forward to meeting the Cuphead studio at IGF. We look up to them for what they accomplished with their beautiful, traditionally-animated indie game. I hope we get to shake hands and talk about our shared passion and struggle!

I'm also curious about Baba is You, as well. I haven't played it yet, but it's nominated for almost every IGF category and it's a student game! How cool is that? It must be something special.

I don't have a whole lot of knowledge on the subject since we were a student studio. From what I gather, one of the biggest hurdles is the sheer volume of content coming out today. Making games is more accessible than ever which is awesome, but it can be difficult to get noticed and make connections.

It's invaluable to be surrounded by people who are better than you at your discipline to give input and mentorship. Things like GDC, CTN and Indiecade can be great opportunities to find that. Schools can be incredible for that too. Digipen was especially resourceful for expanding our network in a variety of directions. Unfortunately, all these things can cost quite a lot of money.

That leads to another obvious hurdle I know all indie developers have to figure out; funding and making a profit. I wish AAA studios would consider sweeping indie studios off their feet with sponsorship to help make our dreams come true! That would be lovely.