CHUCHEL follows the goofy antics of Chuchel, a hairy little creature with a penchant for physical humor, solving puzzles to help the silly creature get its precious cherry.
Kris Graft
Publisher
February 02, 2018

Amanita Design's CHUCHEL follows the goofy antics of Chuchel, a hairy little creature with a penchant for physical humor, solving puzzles to help the silly creature get its precious cherry.

The visual design of the tiny, but determined, creature, as well as its silly friends and foes and the colorful world they inhabit, earned CHUCHEL a nomination for Excellence in Visual Arts from the IGF. Gamasutra reached out to Jaromir Plachy, Lead Designer/Animator/Artist on the project, to learn more about how they created humor and charm with the game's visuals.

The first game I created was a tiny little flash game called Shy Dwarf. It was released just a few months before Machinarium in 2009, and Machinarium is the first game I worked on with Amanita Design. I was responsible for those little story-telling bubbles. Then, I started my own project Botanicula that was released in April 2012. Now there are two games to keep me busy - CHUCHEL and one more secret project. 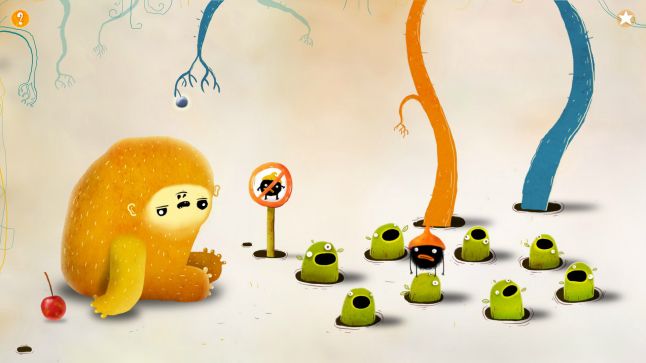 I just felt like creating something funny. While watching people play Botanicula, I noticed the players just enjoyed watching those funny animations. They didn't mind they weren't actually doing anything actively. This feeling evolved into CHUCHEL - an interactive cartoon you can enjoy without having to click or tap all the time.

The environment and characters are designed and drawn in Photoshop. Then, I cut these pictures into individual parts - hands, eyes, mouth etc. - and import them into Adobe Flash which I'm using as an animation editor. It's an old-school style of animation and the world is brought to life frame by frame.

I started working on the game right after I finished Botanicula, sometime in June 2012. I was just drawing and the first thing I came up with was that hairy character with an orange hat. So I was like 'great, I've got the hero, now I only need to make the game'. I continued with designing environments, trying to figure out what could we do with this hairball, and once these designs were finished, I started creating actual levels, spent hundreds of hours animating them and designing puzzles with Jakub Dvorsky. And then it was all about programming, testing, and editing. The joy of development was sometimes interrupted by despair, which led to an almost finished CHUCHEL. 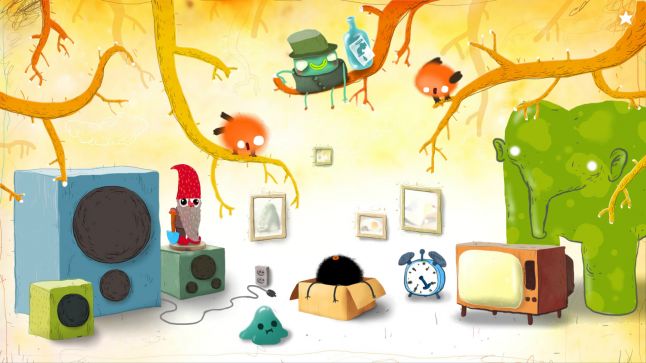 CHUCHEL aims to crack its players up with its goofy character antics. What thoughts go into designing a character's actions to make a player laugh?

It's all very intuitive. I usually come up with an idea that seems funny to me, hoping that I won't be the only guy laughing.

The entire game is wordless, so it's all about situational humor. Actions which evoke emotions without words. That's limiting, because not every piece of information is easily communicable without words, but at the same time, non-verbal humor is comprehensible by everyone. It's a universally comprehensible 'language'. All of us laughed at least once when someone else stubbed their toe or hit themselves in the head. I've got a big head, so it's usually me, which allowed me to apprehend why others are laughing while I'm suffering. Now I've finally had the chance to capitalize on my years of suffering and laugh at Chuchel's pain.

Likewise, how do you design a puzzle where laughter is an integral part as well? How do you work the puzzles so they don't frustrate, but still keep the player engaged while they play through the game's funny moments?

The great advantage of comedic things (games) is that people find them entertaining even if they're not good at them. Of course, if solving that kind of puzzle takes too long, it's that much more annoying. Frustrating parts can only be spotted after the levels are finished and played by other people. It requires A LOT of testing and fine-tuning.

What drew you to add levels inspired by classic games?

CHUCHEL itself is a game, so I thought it might be fun to include references to these classics, or, to be more specific, put Chuchel into these games and see what happens. Since humor is fundamental for CHUCHEL, these classic games needed to be shifted into some sort of parodies. So, when you're playing our variation of Pac-Man, you're not being a weird yellow ball trying to run away from these ghosts, but a swarm of Pac-Men is actually hunting you (Chuchel) down. Referring to such classics or making fun of them (in a good way) never seems like a bad idea. It's like there was a movie where Mickey Mouse wanted to torture someone. 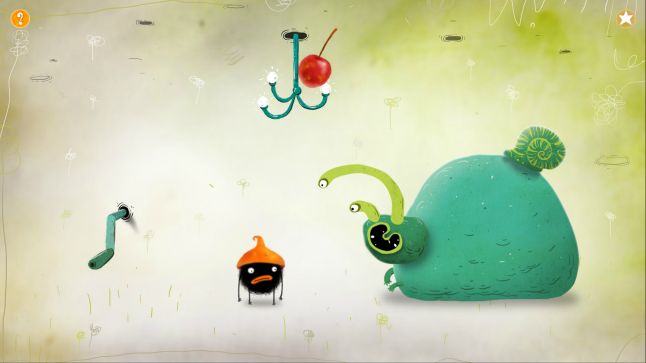 How did you design the game's charming, silly visual style? What makes a creature/environment feel right for the world of CHUCHEL?

Obviously, the basic requirement for any of my characters is that I have to like them. That's what gives them the right to live. The world of CHUCHEL is like an empty space or vacuum without any meaning or purpose. This gives us the freedom to do pretty much anything - in the style of CHUCHEL, of course. There might be some kind of a list of rules for character design hidden somewhere deep in my head, but it's probably too deep.

What I can appreciate the most in video games is their visual appearance, and there are lots of great looking titles this year. I'm looking forward to Kids from Playables - it looks like it might be as weird and indescribable as Plug and Play. Rain World fascinates me as an animator. Speaking of visuals, Night in the Woods, Cuphead ,and Luna are all beautiful games that break boundaries and you've got to like them even if you don't care about games. Then there are Vignettes, Where the Water Tastes Like Wine, Cosmic Top Secret... and more. What a great year!

It's clear that the industry has changed a lot in the past 10 years. It's becoming harder and harder to reach your audience and impress a good number of people - there are just too many good games! Of course, it's great to have more tools, more gamers, and more amazing devs, but nowadays, even if you've got a beautiful great game, there's a bigger risk that no one will actually know about it. It's a bit similar to what happened with music - tools and technology are so accessible that anyone with a decent computer and pair of ears can make a studio-quality record, but it's more challenging to make it visible.