My first review ever please be gentle :) Vanquish is like an orgasm, short but sweet.
Keith Yap
Blogger
November 13, 2010

You may have never heard of this game because of the lack of marketing however I hope that after you’ve read this review you’d have a new insight about this game. Vanquish is set in a future where Russia demolishes San Francisco with a giant satellite microwave beam which creates the conflict that your character Sam Gideon needs to end.

If you have heard about this game then you would have read or heard about the game being short. The truth is it isn’t really that short but it’s more of average however it feels short because of the lack in content and things to do after you’ve finished the game. The only thing you could do is finish the challenges or play in a harder difficulty or improve your hi-score which isn’t really fun for most people.

The story seemed like it wasn’t given much thought and it was very straight forward and had very little character development. The story could still be improved with more characters as the story only has 6 characters which certainly limited the length of the story, three of them only having 1-2ish cut scenes so only the remaining three had any development. The game could certainly be better in this aspect and I hope if they ever make a sequel this would be given a proper development. 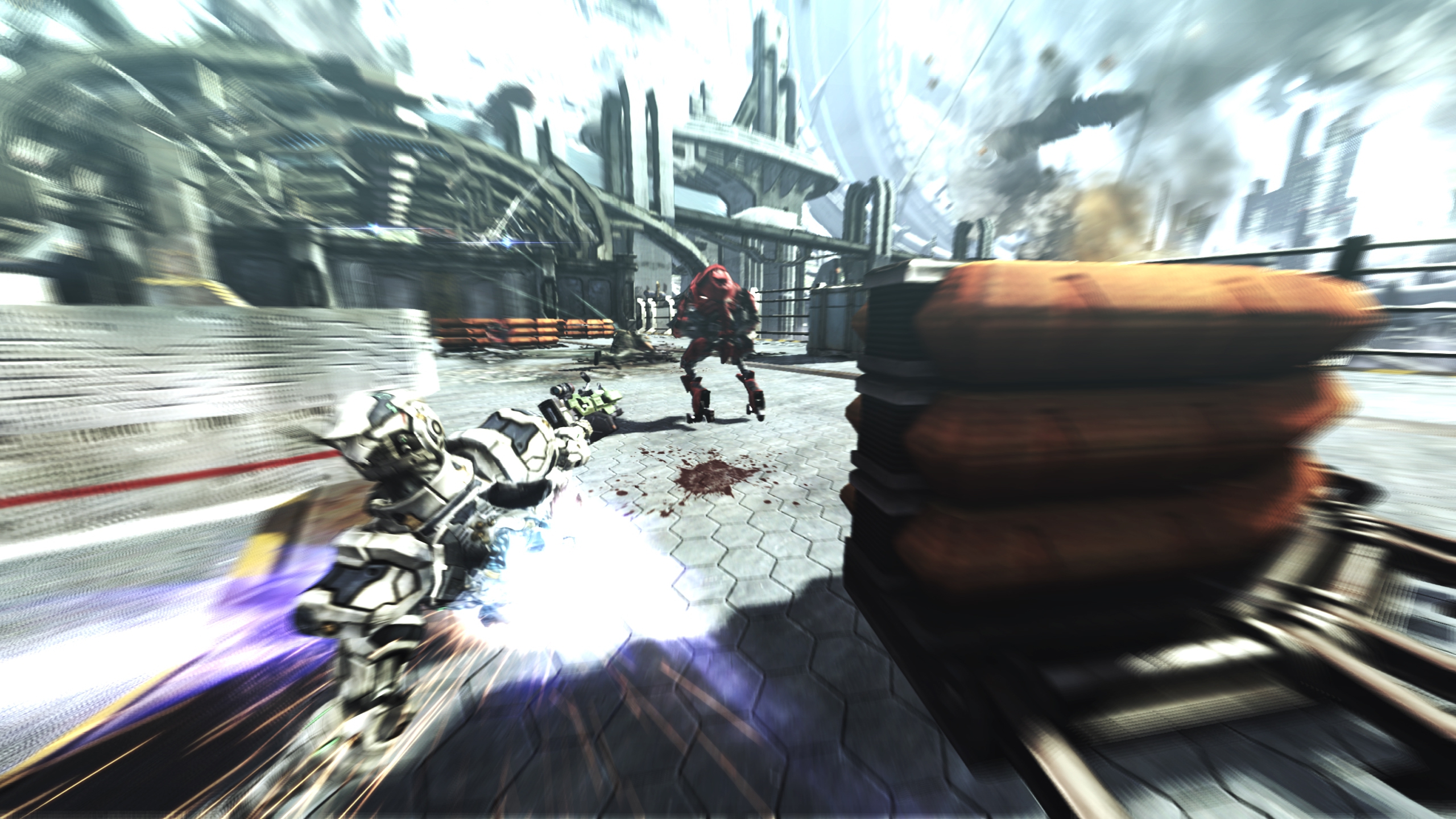 Simply wow, this game isn’t really the best in a graphical perspective but the visual style certainly delivers. The sci-fi flare and transformer effect for the guns are certainly cool. The graphics compared to other games in the market just doesn’t compete. The facial features of characters don’t feel very realistic which can somewhat be a turn off maybe because of its maximum resolution or the fact that the voice to face sync feel tight. The images don’t feel as crisp sometimes and it runs at 720p max like most games. Also the physics behind the game engine isn’t as complex as most games although you will only notice this in a certain stage with tall grasses that make you feel like going through a thick wall while getting hit by enemies. Power sliding gives gamers a motion blur effect which definitely translates the feeling of speed as if you were Sam Gideon which is a plus in my perspective. However there are times where the motion blur can feel like it’s too much. I'm not saying it's bad its actually ok just not excellent.

The game interface also blends really well with the visual theme. Enemies use a red palette to easily distinguish them from allies which makes the game play much more enjoyable however I did have a friend who was colour-blind to red and I am sad to say he won’t be able to enjoy the game as it should be. The levels are also well made making them easily distinguishable from each other this was much more evident after aiming for a certain trophy/achievement to find miniature statues hidden in every level. Also I love the fact that it doesn’t go for that realistic approach but more of an over the top approach which I find much more enjoyable.

A lot of the things found in this game can also be found in other games however when put together it feels entirely different. The game gives you the option of using a cover-fire set up or running and gunning but what really makes this game fun is the matrix effect. The game literally slows down for you meaning the game time moves much slower but the fire speed of you gun and bullet speed only get a smaller slow down. The slow-mo effect is certainly nothing new however the way it is activated is not like other games where you simply tap a button, the game activates it when you slide and shoot, dodge roll and aim, jump over cover and aim and probably others I haven’t tried. These gives you more options in tackling situations and look cool in the process.

Now let’s talk guns, the game lets you upgrade the guns using power-ups or picking up the gun again with full ammo else it will simply refill the ammo. Sadly you won’t retain these upgrades after finishing the game. The game also lets you have the option of carrying 3 guns at a time and a HE grenade and an EMP grenade. The list of guns are very familiar and not all that different however there are other guns like the Lock-on Laser, LFE Gun and Disk Launcher that are certainly an interesting addition to the game.  Melee in this game depends on the gun you are equipped with varying from somersaults to a flurry of punches. However, the game punishes you after hitting with a melee attack and overheating your suit which prevents you from spamming these fun moves. I believe that this is a balance issue because they wanted the game to focus on replay for scores than replay for fun unless you find beating high scores fun. There are a few guns however that have similar melee attacks like the LFE gun and the Lock-on Laser I think which kind of disappointed me.

The game tends to force you to use the heavy machine gun which is the easiest weapon and you can probably finish the game by simply using that gun alone however other guns may prove so much more effective than others. I think it’s good and bad to depend heavily on one gun, good because changing weapons every time can be annoying, bad because you might neglect the other guns which are also fun to use. The strength of each gun seem to be more evident when playing the challenges which you will probably only play after you’ve finished the story.

The game is very fast paced and you will have little time to catch a breath making it a lot more fun or give you a heart attack with all the exhilarating action. The boss battles are certainly well made making each fight unique and give a different challenge making some guns better against certain bosses or mini bosses. You will definitely remember them and have a lot of fun or make you feel very very insignificant. Dodging a rocket launcher is one thing but dodging a GIANT LASER BEAM is AWESOME. The game also gives you the option of playing the challenges which are harder than the story mode because of not having check points creating a smaller margin of error. Overall the game play is very fun but can be improved with minor changes.

Voice acting is a little bad and the dialogue can be a hit or miss but what makes it more interesting is that you have the option of picking from 6 different languages and is certainly amusing when you have no clue what they’re saying of course there are subtitles but sometimes reading them in the middle of a battle is not an easy task. The trophy/achievement list can be a fun task too like melee a hundred enemies or shoot 3 enemies while in slow-mo.

For a game that focuses on replay value I wish they would give more unlockables like new suits or giving us an RPG style level up system making replaying a different experience. It would have made the difference especially for non hardcore gamers. Being hardcore isn’t marketable nowadays because games should be enjoyed by more people and simply makes more money than others. It should only be an option and not fully marketed in that direction.

The game also lacks multiplayer which I think could have been easily added by simply taking out the slow-mo ability. Multiplayer doesn’t really have to make sense it’s simply there for added content. It would have been really fun if you could fight stronger bosses in co-op or a high speed fight with 16+ people. There’s so much possibility for multiplayer that they simply missed.

Controls are really good for me but it may be dependent on the player the gunplay doesn’t punish you with recoil but doesn’t necessarily make it an easy game which is fun in my perspective.

Personally I loved the game but there are times where I just wished the game had more content I’d love to see a sequel to this game getting a better budget because to me it seemed like the game was pressured by budget constraints and was more like an experiment for the game. So I hope that more gamers would pick up this game because it would be very sad to see this game end without a proper sequel. Despite the lack of content I still enjoyed the game enough to merit this score. I think this game was aimed at hardcore gamers however they did put a casual normal difficulty setting which I find weird because it won’t be hardcore anymore although there is a god hard mode which changes the game play quite a lot by scrapping the upgrade system and lots more enemies forcing you to pick up other guns available because every bullet will count. You will enjoy the game however you will not find any motivation to continue playing unless you want to beat the hi-score or get better at the game.