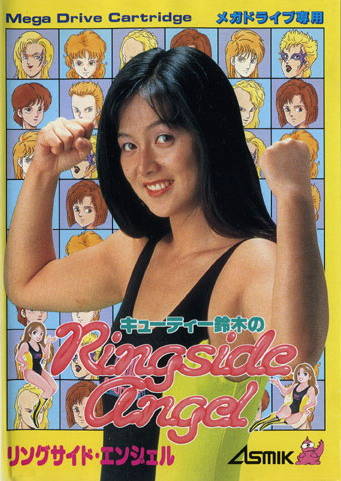 Ringside Angel by Asmik, released for the Sega Mega Drive 16-Bit console in 1990 (Japan release only). 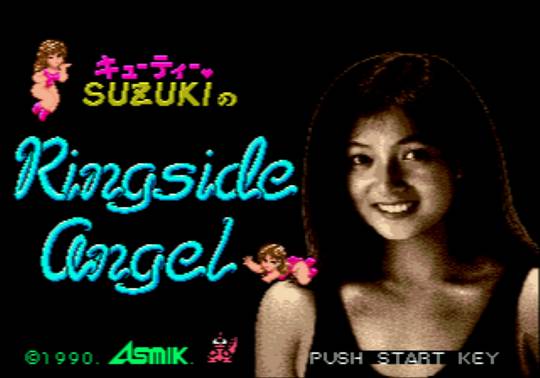 Back in the day, my friend Noah would occasionally take trips out to the magical land of Japan. Oh, Japan!!! Land of videogames! Land of Cartoons! Land of violent comic books and giant robots! It is so trite to say now, as it's slowly but surely been infiltrating into our own culture with the Sailor Moon, the PokeMon, the Yu-Gi-Oh, the Naruto, The Dragon Ball Z. But I remember a time when none of this was mainstream, when all that the US knew of Japan was that "I think they invented the Transformers and Speed Racer over there." A few of us nerds were aware that all the video games (like, ALL of them) had to release over in the East a good year or so (at least) before we got some of the runover. Anyway, Noah would bring back strange treasures from his trips abroad; one year his payload included 3 Mega Drive (Sega Genesis) games. They were Magical Hat Turbo Adventure, Crack Down, and Ringside Angel. 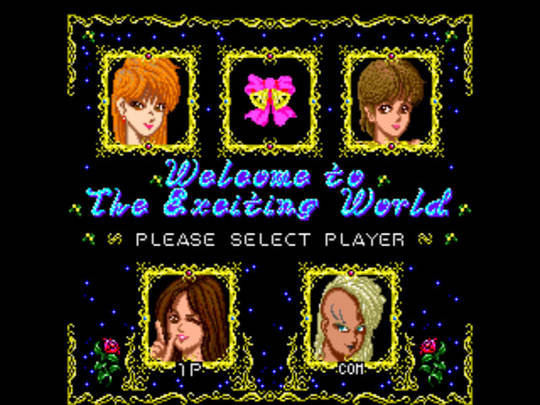 This was definitely a curiosity - I think Westerners got a glimpse of the title screen in an old EGM magazine or something, but that was the end of it until I got my hands on this cart. I was never a wrestling fan, and certainly not a Gorgeous Ladies of Wrestling aficionado; I wasn't particularly interested in what other countries had to say on the matter. Still, I loaded up this obscure and exotic game because it was there, and what did I find? 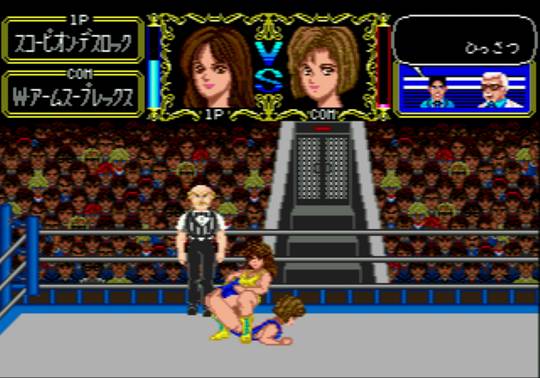 I found a very cute, and very playable arcade wrestling game! It was a strange time in gaming, several years earlier we'd seen Pro Wrestling on the NES which was a good deal of fun (if rather limited) and that was the end of that, really. Sega's Wrestle War was dominating the arcade for ages, but the promised console adaptation was slow to arrive; there wasn't much out there to play on your console, save for a couple garbage in-between games. This game scratched that itch - Pro Wrestling was here in 16-Bit at last, and it was full of chicks! 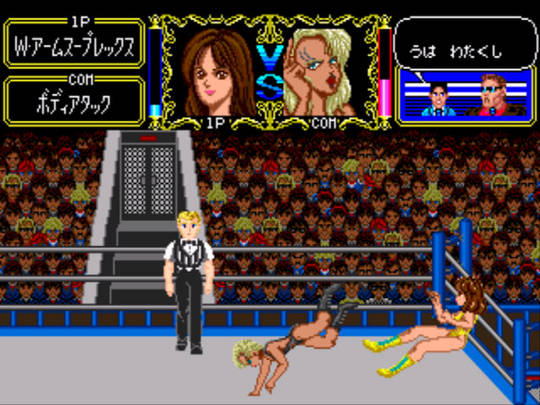 Not a terribly complex game, and certainly kind of perverted as you can tell by the screens (though definitely tasteful as these things go) - Cutie Suzuki in Ringside Angel provided a straightforward take on the sport with some well-animated and lively characters, some interesting touches (commentators who I couldn't read, but they included Arnold and Colonel Sanders...!) and some particularly humorous-looking super moves. This game never got much notice over here, and it's a shame (they should've brought it over!) since it was quite fun and easy to play. A little forgotten gem.