SEARCH
A minimum of 3 characters are required to be typed in the search bar in order to perform a search.
Announcements
Event
Free Webinar on 5/24: How Predictive Analytics Drives Mobile Conversions & Boosts Revenue - Register Here!
PreviousNext
DISCIPLINES
2 min read
article

Retro Game of the Day! Flicky 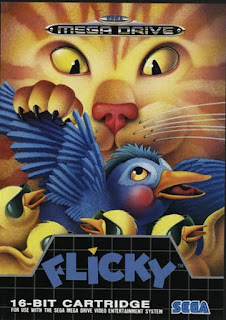 Flicky by Sega, original arcade release in 1984, and ported to several other systems (such as the Sega Master System and the Sega Genesis) in the years following.

Flicky is the product of a bygone era to be sure, a time when many games were simple, cute, and cuddly.. before they largely embraced things like decapitation and mutilation. Oh, the simpler days.

In this adventure, you a blue bird tasked with rescuing your little bird babies (chirps) from the hungry housecats who would eat them. You must pass by a chirp to get him to follow you, then lead him to an exit for safety. To increase your score drastically, get a line of chirps following you and then deposit them all simultaneously.

The playfield scrolls horizontally, and warps around after you reach the boundary (similar to another game of the period, City Connection by Jaleco). Picking up a train of chips drastically increases the real estate that your line could be hit by a cat, meaning you'd need to go back and try to pick up the Lost Soul in order to get that max point value. It's tricky stuff!

A simple game, but not an easy one to get right into. You don't have much to defend from the cats and must be good at avoiding them and protecting your little birdies. A challenging game, but also quite fun!