Retro Game of the Day! Flashback: The Quest for Identity 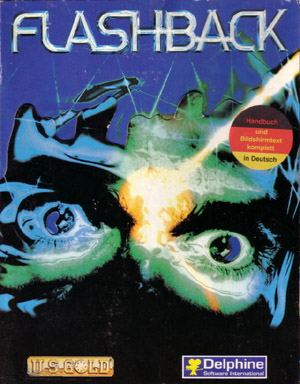 Flashback: The Quest for Identity by Delphine Software, published by U.S. Gold, originally appearing in 1992 on the Amiga and ported to several other platforms the following year. 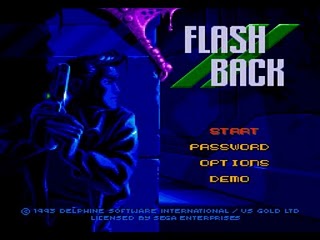 To me - this will forever be "one of those games which got away." I rented the much-ballyhoo'd "Out of This World" which preceded it, and sported a very similar look - and though many folks loved that game, it honestly was not my cup of tea. For whatever reason, I decided to give this follow-up a shot - and though I was skeptical, it sucked me in, in a way that not many games can. But, I never ended up buying it (or completing it). (NOTE: Before people call me out on this, Flashback is not actually a sequel to Out of This World" - stylistically and gameplay-wise, they share many similarities, but the storylines/devteams/gameplay styles are quite different. At the time these games were released, it was common to hear both mentioned in the same breath however, and many in the media considered the games siblings). 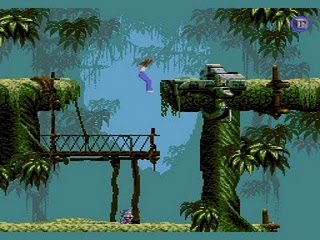 The whole affair takes place in a European Cyberpunk "Blade Runner"-ish universe, with more than a bit of some Total Recall overtones. You wake up in an exotic jungle, your memory has been wiped out, and you find a pre-recorded video of your earlier self explaining some of this (and bits and pieces of an alien takeover plot, et cetera, et cetera). 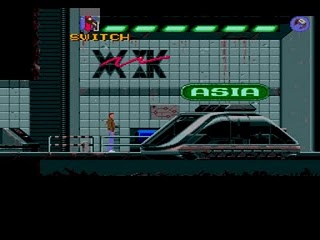 The game was rendered Prince of Persia fashion with rotoscoped graphics (filmed live-action, then drawn over with pixel art) which was strikingly effective in its day - the animation looked so fluid and lifelike compared to the usual low-frame-count business that was the order of the day. The graphics of the game's backdrops were likewise beautifully rendered, with much care being applied to creating the nightmarish futuristic cyberpunked-out world in which the story unfolded. This game was a pleasure to play through, and it looked very different than the usual "hi-tech Japanese 16-Bit" or "thrown-together Western developed games" that were otherwise quite common. So special was the presentation, that the game was marketed as being "a CD-Rom quality game packed into a regular game cartridge!" I will have to remember to use that line... 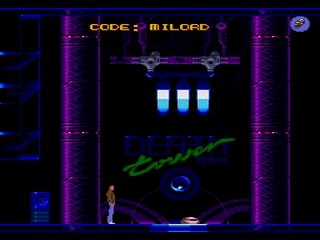 The game also utilized the familiar (but not too overdone) Prince of Persia style of play mechanics. As opposed to the regular run and gun style of play that many of these types of games employed, Flashback required you to make much more delicately thought out motions through it's world. Running and rushing through most areas with guns blazing would mean lots of dying and repeating over and over. Perhaps this meant it would not be too popular with casual console gamers - it was more about thinking and planning one's actions beforehand, rather than mindless blasting and dodging. 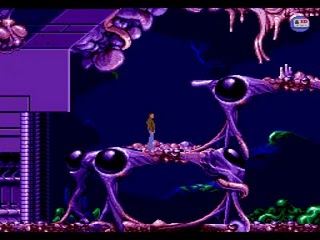 There's a lot to say about this manner of games and a simple retrospective won't do it much justice. These screenshots may not be so provocative now, but back in the day they looked absolutely stunning and the story and world the game laid out was quite compelling and interesting. It's a shame that we never saw much more of these games - they still hold up quite well, and are worth investigation by modern gamers. Pick up Flashback, play a little patiently through its early story, and don't be too surprised when you find yourself getting sucked in as well!