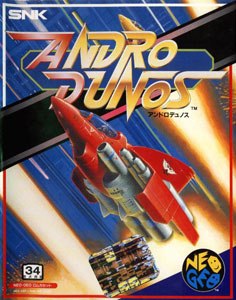 Andro Dunos by Visco Games, released for the Neo Geo in 1992. 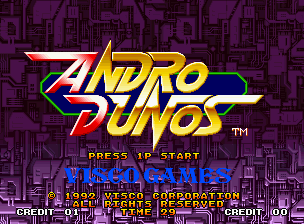 And here we have... drum roll.. another side-scrolling shoot'em-up! And, the crowd collectively yawns, because there are probably literally thousands of entries in this genre to pick from. And yet, this is a game which has stuck in my brain all these years for some reason or other, and so now we will ask that question "how is Andro Dunos?" 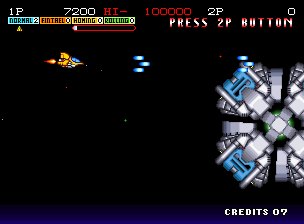 As mentioned, tis is pretty typical fare for the genre, and most Neo Geo fans will really dismiss it in lieu of some of the more popular blasters for the system. In spite of that, for it's time (and still today) Andro Dunos was a colorful, easy-on-the-nerves shooter which may not impress with horsepower, but delivers in terms of being a fun go-to game when you just want to blast away at some space cretins. 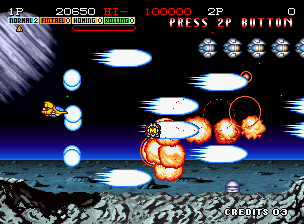 Peeling a little further back, there are some elements to this game which make it special. I was impressed with the display, the game is a little garish but it is undoubtedly one of the more colorful shooters out there. The graphics lack tight detail and complex styling, but they make up for it with some real colorful liveliness (spread out through all elements of the game) which is hard to find elsewhere, especially in a non-cute shooter. There were so many dark, moody and downright dreary shooters available at the time, and Andro Dunos felt like a non-goofy celebration of the genre which was certainly unusual. 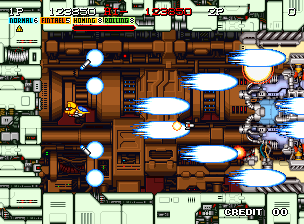 To top it off, the game sported a 2-Player simultaneous mode, something which seemed to be the norm for a lot of Neo Geo shooters (though it was still an aberration overall) and this made for a great mindless game to attack with a buddy. No two ways about it, more serious fans of the genre would be better served chewing away at more complex fare such as the soul-crushing Last Resort - but for the rest of us who just want to have a good time and kill some aliens, you could do a lot worse than loading up Andro Dunos!