Player Segments Based on Gaming Motivations

What distinct player types appear when we conduct a player segmentation based on gamer motivation in a data set of 500,000 gamers?
Nick Yee
Blogger
August 18, 2020

(This post is the first in a two-part series that recaps our GDC 2020 talk.)

While the underlying math can get complicated and there are many different algorithms for player segmentation, in the simplest terms, segment analysis identifies the distinct subgroups within an audience. So members of each segment share similar traits, but they are different from members of the other segments.

Presented in this way, it seems natural to conduct a player segment analysis on our data set of over half a million gamers who have taken the Gamer Motivation Profile. Intuitively, doing so would provide a taxonomy of gamers, as well as actionable segments for tailoring game design and marketing messaging.

But you may have noticed that in the 5 years that we had enough data to do this, we’ve never presented something like this for the full data set. So if this is so obvious to do, why haven’t we done it sooner? We’ll come back to this and the unexpected problems that emerge after walking through the player segments we uncovered.

The Gamer Motivation Profile is a 5-minute survey that allows gamers to get a personalized report of their gaming motivations, and see how they compare with other gamers. Over 500,000 gamers worldwide have taken this survey. The 12 motivations that are measured in our model were identified via statistical analysis of how gaming motivations cluster together. 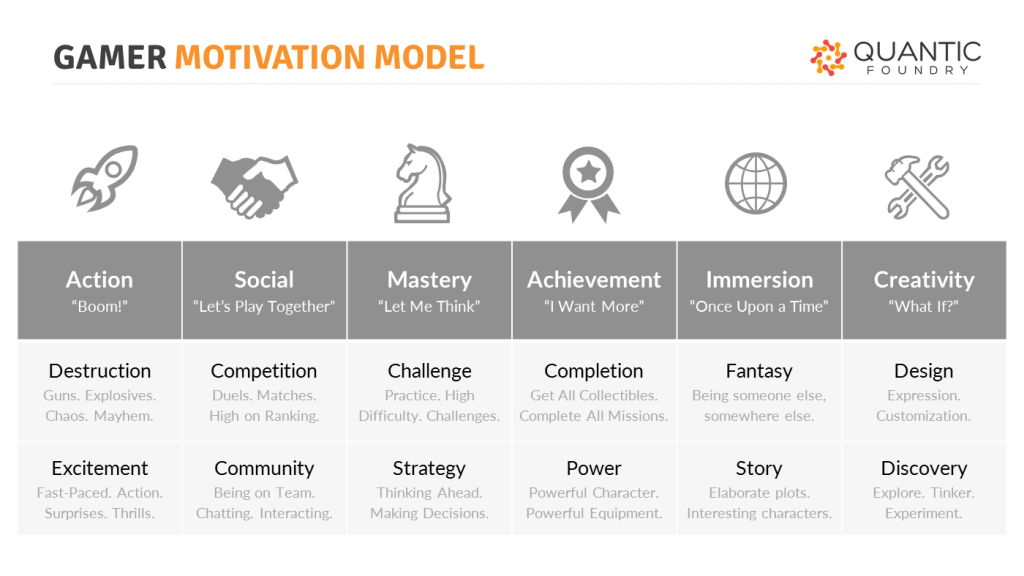 Here are the player segments that emerged when we conducted a clustering analysis of the ~500,000 gamers who have taken the Gamer Motivation Profile. 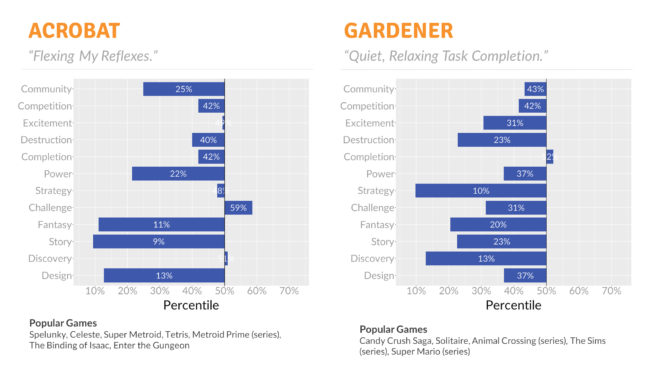 Acrobat: Acrobats are solo gamers who primarily want to take on challenging gameplay and they want to practice over and over again until they can take on the most difficult missions and bosses in the game. They enjoy games that are moderately paced, that require some thinking and figuring out the game mechanics on your own. What Acrobats really don’t care about is world-building and window-dressing. So in their popular games list, we see titles like Super Metroid, Tetris, and The Binding of Isaac.

Gardener: The Gardener is looking for quiet, relaxing task completion. They are looking for gameplay where the rules are presented upfront, as directly as possible, and where the gameplay itself is more spontaneous and reactive. When X happens, I need to do Y. There isn’t any stress or anxiety about having to plan things out 10 steps in advance. The Gardener enjoys task completion for its own sake—whether this is completing a level, collecting stars/trophies, or collecting collectibles. Among their popular games list, we see games like Candy Crush and Animal Crossing.

Slayer: Slayers want cinematic destruction with a purpose. They want chaos and mayhem in the context of a rich game world with an overarching story. Their low Discovery and Design score points to a willingness to experience highly curated experiences that are designed for them, instead of having a palette to customize with. So in their popular games, we see lot of on-rails action-adventure games like Uncharted and Tomb Raider.

Skirmisher: Skirmishers are centered on Action-Social motivations—the cluster of the first 4 motivations on top. They’re looking for fast-paced team arenas that aren’t too challenging and don’t require much thinking and planning. They want exciting arenas that they can easily hop into. The low completion score means they are fine with more match-based games where everything resets each match (instead of being persistent and cumulative). In their popular games list, we see online shooters like Call of Duty and Battlefield. There’s a much lower % of female gamers among Skirmishers, and they are slightly younger than average. 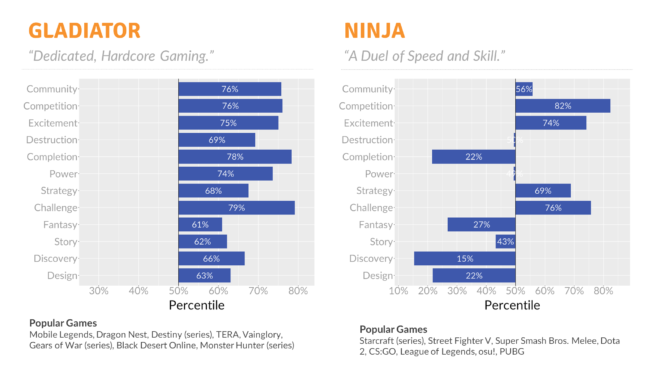 Gladiator: Gladiators are much more likely to identify as hardcore gamers, and they want games to engage them using a broad spectrum of features. They are looking for an epic experience that provides team arenas, fast-paced explosive gameplay, power progression mechanics, challenging gameplay that requires strategic thinking, and a rich world setting with lots to explore and customize. We see a lot of MMOs and shooters in their list of popular titles, like Destiny, Gears of War, and Black Desert Online.

Ninja: Ninjas, like Acrobats, care about taking on difficult challenges. But Ninjas also want strategic decision making, fast-pacing, and competition. So they see video games as places to test their skill and wits against other players. The low Completion score again points to a preference for match-based gameplay where every match starts fresh, and Ninjas aren’t driven by in-game progression as much as they’re driven by skill-based mastery. In their popular games list, we see titles like StarCraft and Street Fighter.

Bounty Hunter: Where the Slayer wanted an on-rails curated cinematic experience, the Bounty Hunter wants a game world that they can make their own through customization and exploration. So where the Slayer had low Discovery and Design scores, we see above-average Discovery and Design scores here for the Bounty Hunter. Bounty Hunters are also interested in power progression through leveling up their characters and upgrading their weapons. So they want to see their characters grow and become powerful in the context of the world. This is also something that differentiates them from the Slayer, who didn’t care about power progression and seemed to be more interested in the moment-to-moment experience of the game. So here in the Bounty Hunter’s popular games, we see titles like Saints Row, Far Cry, and Mass Effect.

Architect: The Architect wants planning and decision-making that leads to progression and task completion in the game. They also want games with interesting settings and stories. They strongly prefer solo gameplay, without teamwork or competition, so they have full control over their gameplay experience. And they prefer games that are slow-paced, relaxing, and serene. This is a player segment that wants to plan and build something tall and enduring. They want to build something over time and have it not be destroyed. In their popular games list, we see titles like Europa Universalis and Civilization.

Bard: And finally, Bards are social players who want to chat and interact with other players in game worlds that are rich with lore, stories, discovery, and customization. They want to be part of a grand story in a community of other players that together craft and shape the world and the stories that get told. For them, the game is a theatrical stage. They care very little about power progression and task completion, and want to just experience the game world organically. In their popular games, we see titles like The Secret World and Final Fantasy XIV.

So What’s The Problem With These Segments? 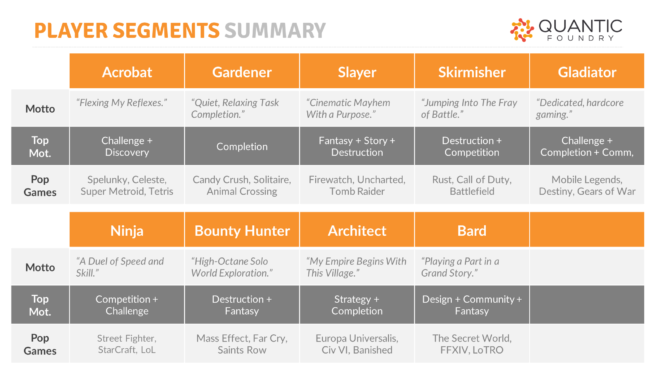 While this segment model is clean and provides a taxonomy for gamers broadly speaking, the problem is that the segments read like caricatures of genres. There’s a lot of nuance and granularity among players, but when you try to segment all players, then the resulting segments are necessarily coarse.

This becomes much more apparent when you try to apply the segment model to specific game titles. If you make an Open World Action-Adventure game and we apply this segment model to it, the largest block of players in your audience will be Bounty Hunters (maybe 40-60% of them) and that’s not really helpful to know. So the problem is two-fold: there’s a very high proportion of a specific player segment, and none of the segments quite capture the nuances of the specific genre.

So the segment model is great if you only care about things from 50,000 feet up high. But almost all of us are typically working in the context of specific genres if not specific game titles.

If you'd like to learn more about the nitty-gritty details of the analysis and data science, you can take a look at the original post on our blog, which includes a downloadable PDF reference for the 9 player segments.

In the next post, we’ll walk through a segment solution for Civilization VI gamers specifically as an example of what happens if we explore player segments within the context of a specific genre/title. Stay tuned.