The Train Jam rolled out of Chicago on Thursday afternoon, but for many, the journey began elsewhere. Some people flew in from California to Chicago, only to take the 56-hour trip back by rail. Others came from Europe and Australia. For me, it began in Waterloo, Indiana, at a train station that’d be mistaken for a bus stop, if it weren’t for the pairs of rails trailing in front of it.

We crowd into a sports bar in Chicago’s Union Station. Dozens of game developers are there, some with familiar faces, but mostly not. By the end of the trip, we'll all be familiar with one another. 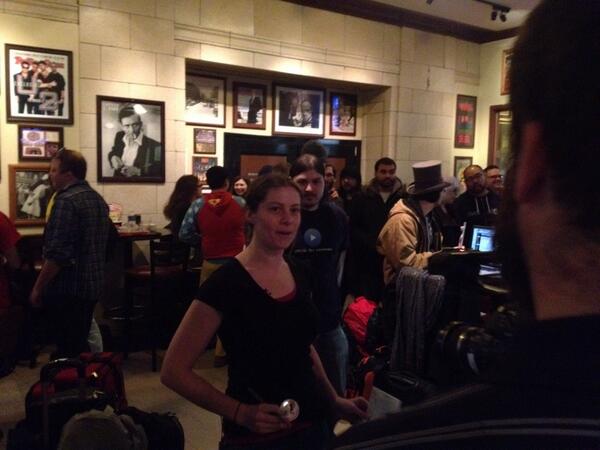 The Train Jam is the work of Adriel Wallick, a weather satellite programmer-turned-game developer. She tells me how she recently uprooted herself from her life in Boston. Wallick says she's not based anywhere anymore — she put most of her possessions in storage, and she’s going where life takes her. “It’s so liberating,” she says, eyes shooting upward, hands bursting open. I get the feeling that the Train Jam is her way of letting fellow game developers get just a taste of that liberation.

At the deli, she kneels on top of a tall bar chair and announces the theme of Train Jam: “Disconnected.” Some developers were expecting the theme to be a bit more obvious — “trains,” maybe. But this is more interesting.

Some quick, initial brainstorming at the deli plants seeds of ideas that will grow on the train: game mechanics that involve disconnecting controllers; a multiplayer game where people try to break the lines of their opponent's shapes; a “masocore”-sounding game in which you’re on a runaway truck and the brakes and other systems become disconnected, and you try to get as far a distance as possible; another jammer wants to explore the theme using the Oculus Rift VR goggles she brought along.

In the Amtrak waiting room, an enthusiastic worker comes through the door and yells “Train Jams! Train Jams!” Our heads turn. “Your train is here!”

Our train rolls out of Chicago. People continue their brainstorming sessions, while some already have their laptops open and are coding. Others are just hanging out getting acquainted with the train, figuring they’ll get to the serious jamming a bit later.

It doesn’t take long before the observation deck is overtaken by Train Jammers. This car has windows on the sides and the ceiling, a few tabletops and plenty of power outlets. The quiet hush of work and subtle tapping of keys is frequently punctuated with bursts of laughter. At this stage, I see screens cluttered with code and beginnings of artwork. Some are getting early prototypes working.

Zoe Quinn, known best for her game Depression Quest, is working on a systems-focused game about keeping important connections while trying to survive the indie convention circus. She says she wants to make a game that explains to her friends what the hell she's been doing for the past month.

Later in the night, when many of the “regular” passengers are winding down for the evening, curling up in their reclined seats, I spot Alicia Avril in the dark, sitting on the floor in coach class by a power plug, laptop glowing. She’s using Unity to develop a hidden object game for the Oculus Rift. I ask her to strap on the goggles for a picture. She puts them on, swivels her head. "I have a room now," she says.

For some developers like Ted DiNola, who worked at Trendy Entertainment in the past, and then Zynga, the jam (and his main work on the upcoming adventure game Read Only Memories), is about re-connecting with the spirit and the discipline of being an independent developer, as opposed to a cog in a machine.

A late-night stop — in Omaha, Nebraska of all places — added Rami Ismail of developer Vlambeer. He was flying out of London where Ridiculous Fishing was nominated at the BAFTAs. "It's a miracle I even made it here," he says. Flight delays and other issues compounded the difficulty of a London-to-Omaha jump, and he got to the run-down station 15 minutes before the train came. He comes on board, takes some time to say his hellos, then goes to grab four hours of sleep before he starts jamming.

As we roll through the rural Midwest, the technology that we rely on is failing us constantly. Signals can’t make the great leap between tower and phones. Tomorrow, mountains will be fending off the connections.

A pair of girls, regular passengers, are making up card games — variations on War — in the observation car. A pair of young bearded Amish men play a game of Battleship.

Dark has fallen on the first day of the Train Jam. But even as the Amtrak train barrels through the Midwestern night, the glow of laptop screens, the murmuring voices and the occasional bursts of laughter hint how many of the game jammers will be working well into the night. Some would be working through it. 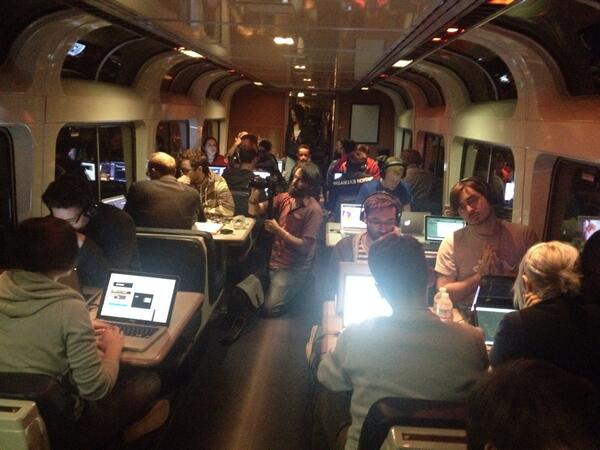