Omdia's game console analyst, Matthew Bailey, assesses Nintendo's announcement of its new Switch OLED model and explains why it isn't - and never needed to be - the "Switch Pro" many were expecting.
Matthew Bailey
Blogger
July 06, 2021

In brief, Omdia doesn’t expect the Nintendo Switch OLED Model to have a significant impact on the market, nor Nintendo’s overall trajectory. The new SKU’s feature enhancements over original Switch hardware are minimal and do not provide a compelling reason for existing users to upgrade. However, its relative affordability in relation to existing Switch hardware – and the prospect of a more premium Nintendo experience – may be enough to attract prospective new Switch owners and dedicated Nintendo fans.

While some industry watchers were expecting the announcement of a more powerful, “pro” version of the Switch, there never was a compelling business case for Nintendo to launch such a device. Indeed, the Switch is already enjoying strong momentum and releasing a more powerful version of the Switch would risk splitting the user base and complicating the development process. It therefore makes sense for Nintendo to release a minor, fully backwards compatible upgrade to the existing Switch hardware. The new OLED model fulfills this brief and is line with what Omdia was expecting and, as such, we do not anticipate its release to impact our existing Switch hardware sales forecast.

As we have previously stated, Nintendo Switch has hit its peak higher and later than is typical of Nintendo’s consoles. And, as shown in the below figure, we also expect Switch’s decline from its peak to be much less severe than that of the Wii. Together, these trends signify that a full hardware refresh is not necessary at this stage in the Switch’s lifecycle. 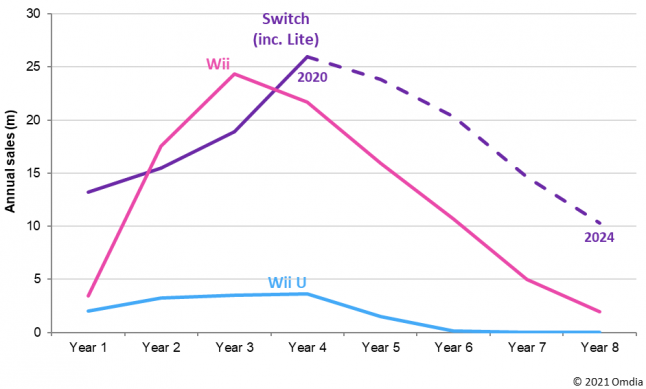 To be clear, the new OLED Switch does little to differentiate itself from the standard model. While the new, larger OLED screen will offer gamers a more vibrant and colorful handheld visual experience, it still has the same native resolution of 720p. This is necessary given the lack of any processor upgrades, but it also means that the new SKU’s titular feature actually has a lower pixel density than even the original Switch model that launched back in 2017.

Other new features are not exactly ground-breaking either, and most of them can be – relatively cheaply – retrofitted to the original hardware. For instance, although the new model comes with double the internal storage as the original Switch and Switch Lite, this can easily be upgraded on any model with the purchase of a microSD card. Meanwhile, the new LAN port on the upgraded dock is also a feature that can be added to the original hardware by way of a cheap USB adapter. The battery is also identical to that found in the most recent standard Switch SKU, and is expected to last the same amount of time at between 4.5 and 9 hours. Plus the OLED model still seems to lack some features – such as support for Bluetooth headphones – which made the Switch seem outdated in 2017, let alone in 2021 when most flagship smartphones don’t even come with a headphone jack.

Even so, upgrades over the original Switch do exist – along with the new screen, the new kickstand and improved audio will no doubt be well received – but, on the face of it, there isn’t a huge case for existing users to pay $350 to swap their original hardware for the OLED model. Existing users that mostly play their Switch in handheld mode may be an easier sell for Nintendo, given that the improvements the OLED model brings almost exclusively benefit that mode of playing, but the fact that docked output is still capped at 1080p at 60 frames per second means that owning the new model will in no way improve the experience of using the Switch as a home console.

However, those in the market for a new Switch are likely to find it a more attractive proposition – it will retail for just $50 more than the original Switch – which is justifiable, given the superior screen technology and quality of life upgrades that it brings to the table.

Finally, the Nintendo Switch OLED Model should not be seen as Nintendo’s response to launch of the PS5 and Xbox Series X/S. Nintendo occupies a completely different space in the market to Sony and Microsoft and, as such, has no need – or intention – to compete on a head-to-head basis with either company. Instead, the main point of the OLED Switch is to give Nintendo customers more choice when it comes to its hardware, representing the most premium way to play Nintendo’s acclaimed first-party titles. And, despite the lack of meaningful upgrades, this could well be a compelling enough reason for many Nintendo fans to pick one up when it launches later this year.