I’ve been able to hang out with the Nintendo Switch for a few days to gather some pre-launch impressions.
Kris Graft
Publisher
February 24, 2017

I’ve been able to hang out with the Nintendo Switch for a few days to gather some pre-launch impressions. The timing was perfect: I was just about to leave for the DICE Summit in Las Vegas, followed by Game Developers Conference in San Francisco the next week. With the Switch’s portability being a prime selling point, I figured I’d take it along.

One thing that you can’t truly appreciate in the Switch advertisements is the size. This is a small, unassuming console – a welcome contrast to the relatively hulking PlayStation 4 and Xbox One. More than one person I showed it to commented on its diminutiveness and asked “is that it?!” 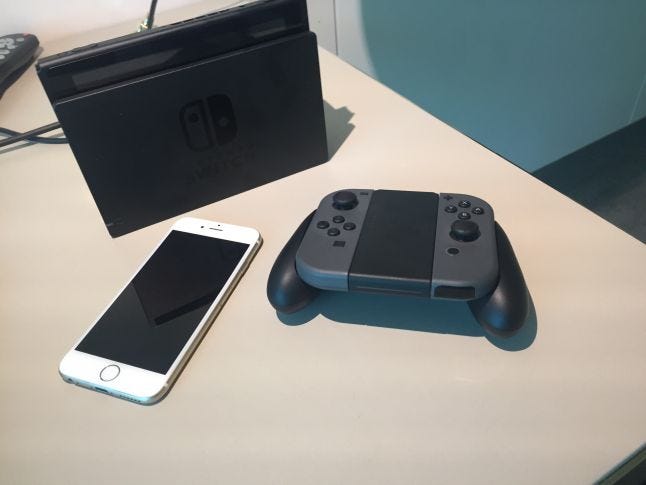 In portable mode, the unit is hefty when comparing it to the Vita or 3DS, but it’s easy to cut it some slack considering it’s also a home console. I didn’t whip the portable Switch out in public much (I didn’t feel like having random strangers in the airport ask me about it, sorry!), but I did use it on a plane, and it behaved in the same way as when I played it in a chair that wasn’t 30,000 feet up in the sky. Battery life was on pace to run out in about 3 hours playing Zelda: Breath of the Wild, as advertised.

Of course, I was able to use the Switch in its dock and with a TV in my hotel room. Switching between portable and home console and back is fast and reliable, and I’m able to pick up exactly where I left off no matter which configuration I’m switching to. It’s impressive.

The diminutive joy-cons that slide on and off the screen unit to become their own little independent controllers will probably make your hands crampy after a while (Zelda: Breath of the Wild is the only game I have right now, and doesn’t make use of single-joy-con play). However, I didn’t expect some people to have minor freakouts when you detach the joy-cons, and explain how they’re cute little controllers.

Because of the flexibility in their usage, the left joy-con does sacrifice a good d-pad when in grip mode, but if people are concerned about that, they have the option to shell out money for a Switch Pro Controller. 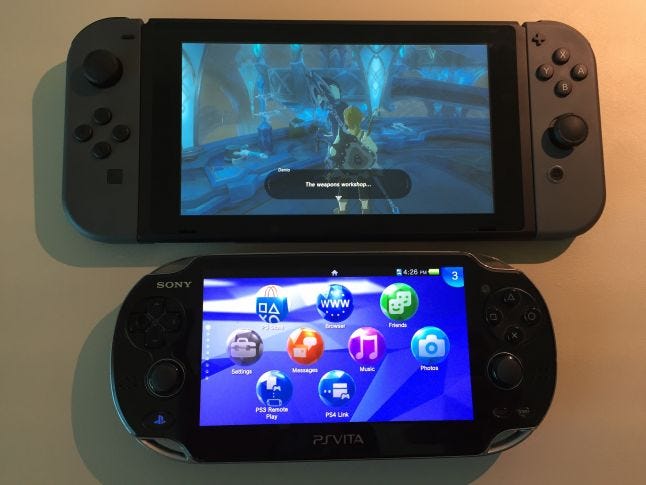 The Switch and the best handheld console ever made

While the joy-cons are unique and cool, the biggest issue with the Switch in these pre-launch days has to do with the left joy-con. It becomes intermittently unresponsive. For example, while playing Zelda: Breath of the Wild using the joy-con grip, the left stick would just go unresponsive. But it didn’t seem to necessarily un-sync from the console. Control would return if I changed position of the controller. Other journalists who received early units have run into the same issue.

In my case, the fact that responsiveness would return when I would lift the controller up from my lap made me wonder if my iPhone’s Bluetooth was interfering from my front pocket. Turning off the phone didn’t fix the issue. It’ll be interesting to see if this is solvable via a patch or if it’s a hardware issue. I find it difficult to imagine Nintendo didn’t know the issue exists, and hopefully the company has a solution it’s keeping quiet about for now. It’s disappointing at this point nonetheless, but it’s possible the issue will be solved before the Switch even properly hits the market.

Build quality is on par with Nintendo’s other home and portable consoles, meaning it’s solid. My Switch has a bit of a gap between where the plastic panels are supposed to meet on top of the unit, but it’s nothing I’m fussed about. …I swear I’m not fussed about the gap.

Ahem, anyway, I’ve only been playing Zelda, which is a game with pretty standard controls. So far, I haven’t played anything that takes advantage of the Switch’s new features like the “HD” rumble or any of the motion-based gameplay of 1-2-Switch, so I’ve got nothing to report that front yet.

But when showing this thing to people, they all kind of flip out when you show them the magical gadgetry of the joy-cons and their various configurations, and how you can completely easily and seamlessly go from TV mode to portable mode with some satisfying slides and clicks of hardware. The hardware itself, with its transformations, encourages a level of showmanship, too: 'Look and see what I can do.' Will that excitement translate to word-of-mouth marketing and then to sales? I’m more convinced of that possibility after showing it to people and using it in public…but Nintendo must sort out that joy-con issue before it hits the market.